Meat sales faulted as one source of pressure on the herd 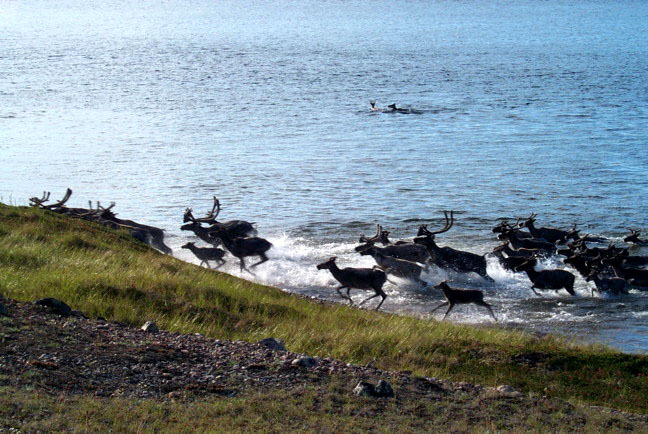 A slight population bump for Nunavut’s Qamanirjuaq caribou herd may look more promising than it really is, wildlife managers are warning.

As well, while the early results of 2017 surveys show a slight population increase from 2014, hunters and government officials say these counts may include animals from the Lorillard herd, resulting in an overcount, according to the report.

The board’s conclusions echo those of Nunavut Environment Minister and Premier Joe Savikataaq, who said in June that early results of GN funded surveys found “a continued declining trend” for the Qamanirjuaq herd in the Kivalliq region.

The Qamanirjuaq caribou herd, which spans Nunavut, the Northwest Territories, northern Manitoba and northern Saskatchewan, remains Nunavut’s largest caribou herd. Previous population reports show that the herd declined between 2008 and 2014 from about 344,000 to below 265,000.

About half of Qamanirjuaq caribou harvested annually are hunted in Nunavut. The harvest is valued by the GN at around $15 million.

The bigger picture of the herd’s population shows a decline of about two per cent per year, the board says. And that’s “less than expected given the stresses the herd is dealing with.”

The report calls “meat sales” one of those stressors, likely referring to the brisk online trade in caribou meat that occurs on Facebook swap-and-sell pages.

Caribou hunting is restricted in Nunavut’s Baffin region, due to the declining population.

Many Kivalliq hunters currently sell meat to communities on Baffin Island. The GN has struggled to track those sales.

The caribou management board’s report criticizes a move by the Kivalliq Inuit Association to lift a ban on issuing exploration permits on calving and post calving areas on Inuit-owned land.

That temporary ban was replaced with other restrictions based on seasonal migration patterns—but the board warns this move opens the door for more industrial exploration.

The report cites concern over exploration work by Agnico Eagle at the eastern edge and regular access point of a Qamanirjuaq calving ground, and it objects to any road that would be built from Whale Cove to the Huckleberry Exploration Project if a mine were to open there.

During the 2017-2018 fiscal year, the caribou management board continued work on a harvest reporting program in the Kivalliq region, sending a biologist to meet with hunters in Arviat, Baker Lake, Rankin Inlet and Whale Cove to get feedback on how to best run a community reporting project.

“The priority is to gather basic caribou harvest information every year from all communities that harvest from the Qamanirjuaq herd so that can be used to help identify subsistence harvest needs and to determine the economic value to the herd to each region,” the report said.

The Beverly and Qamanirjuaq Caribou herds range over parts of Nunavut, Northwest Territories, Manitoba and Saskatchewan.

In Nunavut, the new herd population surveys cost about $700,000 the report says. The board is now calling on the provinces of Manitoba and Saskatchewan to increase their support through funding for board member travel and, for Saskatchewan, to start paying full core funding it agreed to pay the board in 2012 through a 10-year joint herd management plan.

“The Beverly caribou has not received as much attention as the Qamanirjuaq herd because the GN is focused on surveying the herds with the highest level of harvest by Nunavut communities,” the report said.

But the board says that herd also shows high signs of decline and, in November, the Nunavut Wildlife Management Board said that the Beverly herd was “highly vulnerable.”