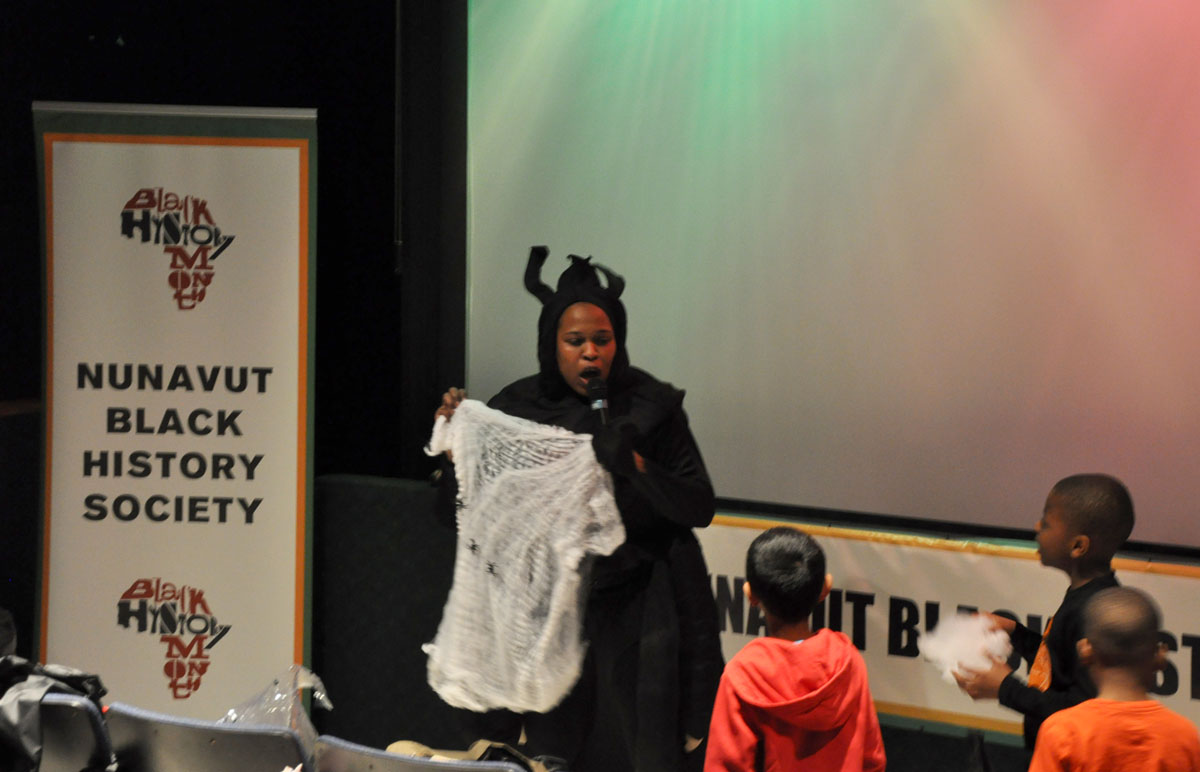 Stephanie Bernard of the Nunavut Black History Society plays Anansi, a character in west African folklore, at a storytelling event held at the Astro Theatre on Sunday, Feb. 24. (Photo by Sarah Rogers)

A human-sized spider emerges from the back of a darkened theatre, cackling and holding a web and baby spider.

This is Anansi, one of the best-known characters in West African and Caribbean folklore, considered to be the spirit of all knowledge sharing.

“I am the king of all stories,” says Anansi, played by Stephanie Bernard, as she invites the children in the crowd to stretch out her spider web across the front of the theatre.

Bernard is the vice-president of the Nunavut Black History Society, which is hosting a series of events in Iqaluit throughout February, during Black History Month.

The Feb. 24 event at the Astro Theatre is called Black History Through Storytelling, and the crowd hears both African and Inuit legends, read or portrayed through short films.

“Storytelling and the oral tradition are important to both our culture and Inuit culture,” Bernard said.

“Even from ancient days, Africans and their descendants have been passing on stories to teach children and to inspire them.”

As with Inuit legends, many stories are told to children to keep them safe, or frighten them away from bad behaviour.

Bernard’s first exposure to Inuit oral storytelling was when the Franklin ships were discovered near Gjoa Haven with the help of Inuit knowledge passed down through generations.

Black History Month coincides with Uqausirmut Quviasuutiqarniq, Nunavut’s annual celebration of Inuktut, so the society wanted to showcase both African and Inuit tradition.

“An event like this helps with cultural understanding,” Bernard said.

There are an estimated 250-300 Iqaluit residents of African descent and another 300 living elsewhere in the territory, and that number continues to grow.

“When I came here six years ago, I knew every single other black person in Iqaluit,” Bernard laughed. “Now, I don’t.”

During the last week of February, the society is hosting an exhibition on Black history called On The Road Again, which can be viewed at the cadet hall from Feb. 25 to March 2 from 10 a.m. to 6 p.m.

Next Sunday, March 3, Iqalungmiut are invited to a Black History Month finale celebration at Inuksuk High School. The event, called the Masquerade Meets the Drum, is free and runs from 2 p.m. to 5 p.m.

There are more details available on the society’s Facebook page.