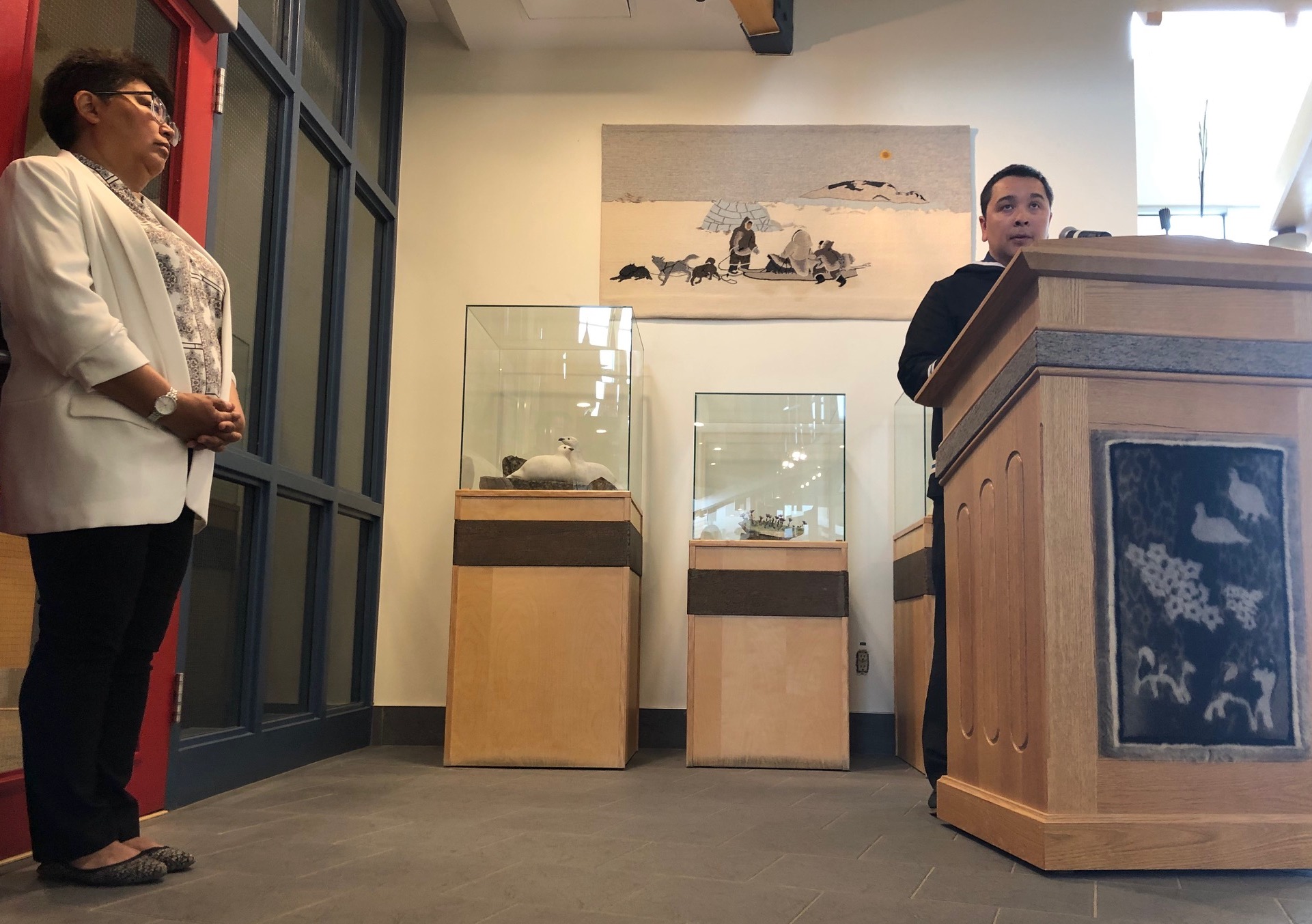 Nunavut Education Minister David Joanasie speaks about Bill 25, which proposes amendments to the Education Act and the Inuit Language Protection Act, on Wednesday, June 5, in the foyer of the Nunavut legislature as his deputy minister, Louise Flaherty, looks on. Joanasie said the bill seeks to fulfill the Government of Nunavut’s commitment to improve the education system and preserve and strengthen the Inuit language. (Photo by Jane George)

Nunavut’s education minister says that it will take 20 years longer than originally expected to bring Inuktut instruction into the territory’s schools from kindergarten to Grade 12.

That new goal is included in Bill 25, “An Act to Amend the Education Act and the Inuit Language Protection Act,” which was tabled in the Nunavut legislature yesterday.

“I believe Bill 25 strikes this balance between promoting and strengthening our Inuit language and culture, while preparing young Nunavummiut for a prosperous future, said Education Minister David Joanasie during a news conference today in the foyer of the Nunavut legislature.

Bill 25 also rolls back the Government of Nunavut’s goal to operate, at every level, in Inuktut to 2040. That’s also 20 years later than a target date set by the Bathurst Mandate when Nunavut was created in 1999.

After a second reading in the legislature, the bill will head into the standing committee of MLAs. Because the legislature adjourns its spring sitting tomorrow, that pushes discussion of the proposed act to the fall sitting, set to start on October 17.

At the heart of the bill, now online, there’s a recognition that it will take much longer to put Inuktut into the territory’s schools than the original deadline of 2020.

This delay is needed to look at issues like teacher shortages and lack of teaching materials, said Joanasie.

To make this happen, the proposed act says the education minister will develop and maintain a strategy for the retention and recruitment of Inuit-language teachers and provide the Nunavut Arctic College “with any reasonable assistance it requires with respect to its Inuit Language teacher education programs.”

The act would also aim to change the role of the district education authorities, putting them more in charge of what is now called “local community programs” instead of “education programs,” although Joanasie said some of the details of what the DEAs will or won’t do are yet will be discussed in the standing committee.

The proposed changes, Joanasie said, are designed to put in cross-Nunavut standards.

But Doug Workman, the president of the Iqaluit DEA, who attended the news conference, said he was disappointed that Bill 25 didn’t appear to take into account more of the feedback offered by DEAs.

The changes to the acts, contained in 10 amendments, are supposed to be based on consultations, which started last September. During these consultations, Government of Nunavut officials heard from more than 800 Nunavummiut, including representatives of Nunavut Tunngavik Inc., the Coalition of Nunavut DEAs, the Commission scolaire francophone du Nunavut, the Nunavut Teachers Association, the Office of the Languages Commissioner and four student groups.

The GN has known since 2013 that, due to a severe shortage of Inuit-language teachers and other capacity problems, it cannot meet the bilingual education goals set out in its 2008 Education Act.

The late Michael Ferguson, then the auditor general of Canada, told the GN that in a report tabled in November of that year.

Those original goals would have seen Inuktut and English used as languages of instruction all the way from kindergarten to Grade 12 by the 2019-20 school year.

Unless the dates set out in the Education Act were amended, the GN would have found itself in breach of its own law.

The GN’s first attempt to amend the act fizzled in 2017, when regular MLAs refused to move a set of amendments into committee of the whole for third reading.

So, in February of this year, the GN introduced an interim act to tide them over until MLAs could make more changes, now found in Bill 25.

The Interim Language of Instruction Act suspended the coming into force of certain sections of the Education Act and the Inuit Language Protection Act with respect to Grades 4 to 12, grades in which the GN faced difficulty over the years in extending Inuktut as a language of instruction.

But even with the 20-year reprieve, the challenge of revitalizing the Inuit language in the schools is huge.

Overall in Nunavut, the transmission rates of Inuktut as a mother tongue to Inuit children up to 14 years of age have fallen, said a Statistics Canada study that has not yet been officially released.

In 2016, fewer than seven in 10 Inuit children up to four years old spoke Inuktut as their mother tongue, down from eight in 10 children in 2001.

Overall, 26,270 people in Nunavut still reported speaking Inuktut at home on at least a regular basis in 2016—an increase since 2001.

But while Inuktut is being increasingly used in the home, for many it has shifted from being the main language to the secondary language, Statistics Canada found.

Meanwhile, Nunavut residents with a knowledge of English have grown in both number and proportion: in 2016, 94.1 per cent of Nunavut’s population, or 33,485 people, were able to conduct a conversation in English. That’s up from 86.7 per cent of the Nunavut population, or roughly 23,000 people, in 2001.