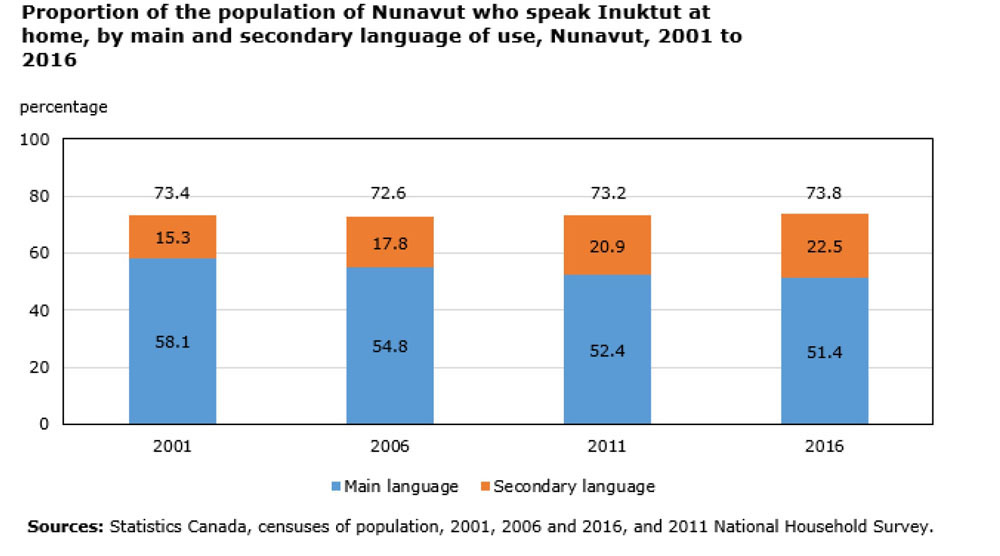 Relying on ideas contained in a report they commissioned last September from three European academics, Nunavut Tunngavik Inc. declared today that the Government of Nunavut’s education system may be “criminally inadequate” and “constitutes cultural genocide.”

“Education in Nunavut has a history of cultural genocide, linguicide, econocide and historicide, and this continues today,” Aluki Kotierk, the president of NTI, said in a statement released on Monday, April 22.

“Inuit children receive the majority of their education in the dominant languages instead of their mother tongue. This constitutes cultural genocide,” she said.

Kotierk, who is visiting New York City today, will present the report to the United Nations Permanent Forum on Indigenous Issues, NTI said in a news release.

In the report, titled “Is Nunavut education criminally inadequate?” the three European authors allege that, within the Nunavut educational system, Canada is violating many international legal instruments, as well as Canadian laws.

They also say Nunavut’s poor record in Inuit language education is related to many harms, including “econocide” (making people poor); “historicide” (exclusion from history); “ecocide” (killing the environment) and “linguicide” (killing a language.)

To help make their case, they cite the absence of Inuit-language instruction beyond Grade 3 in most Nunavut schools.

They also point to statistics showing that many Inuit in Nunavut are underemployed and suffer from poorer socio-economic conditions than non-Inuit.

And they suggest that’s because of Nunavut’s English-dominated school system.

“If the education system has been insensitive to local needs, and is mainly conducted through the medium of English, it is arguable that Inuit are pushed out rather than drop out. They opt out of what is seen as irrelevant education,” the report says.

As for the English language, the report says that it’s a “fraudulent myth” that English should be taught as a universal medium for communication.

“English is promoted as though it is the only language you need in international affairs, an argument that falsely makes other languages invisible.”

“This pernicious myth is energetically promoted in the U.K. and U.S.A., and has probably been internalised in all parts of Canada, including in Nunavut, with the exception of Québec, which, as a province in Canada, has rejected the myth,” the report says.

The report also says that Canada is a product of imperialism by both the French and the British, and that the constitutional concept of two founding nations is “a racist myth.”

And due to various breaches of international law, the Canadian state is practising linguistic and cultural genocide in Nunavut, the report alleges.

“[S]een from an educational and psychological point of view, and from the social consequences of current practices, there is prima facie evidence of education in Nunavut being involved in processes and practices of linguistic and cultural genocide,” the report says in its concluding section.

The report says that the international legal instruments that are violated by the Nunavut education system include:

The report also analyzes existing laws in Nunavut and Canada that are relevant to language and education and, after a lengthy discussion, the report—unsurprisingly—finds the GN is in breach of the 2008 Nunavut Education Act.

“As we have detailed in other sections of this report, it is our strongly held view that the system at present is failing comprehensively in supporting the use, development and particularly the revitalization of the Inuit Language and that therefore the Education Act, 2008 is being breached,” the report says.

And they also say that the Nunavut legislative assembly’s Interim Language of Instruction Act, passed this past March, represents an “an abject admission of failure on the part of the Nunavut authorities in respect of the obligations which they imposed upon themselves in 2008.”

Nunavut MLAs passed that law to give the GN time to develop amendments to the Education Act that are expected to be introduced at the legislative assembly’s spring sitting.

This graphic shows the small proportion of Inuit teachers and principals working in Nunavut schools, compared with the much large number of non-Inuit teachers. (Source: “Is Nunavut education criminally inadequate?”)

On the widely acknowledged shortage of Inuit-language teachers in Nunavut, the report suggests this is because the federal government doesn’t spend enough money on Inuktitut education.

“Appropriate funding for Inuktitut-medium education has never been allocated in the same way as it is met for other Canadian children. The federal government must meet this need,” the report says.

However, the report does not directly criticize the Government of Nunavut.

At a language conference in Iqaluit held at the end of March, a Statistics Canada report presented to delegates found that, overall in Nunavut, transmission rates of Inuktut as a mother tongue to Inuit children up to 14 years of age are falling

In 2016, fewer than seven in 10 Inuit children up to the age of four years spoke Inuktut as their mother tongue, down from eight in 10 children in 2001.

And knowledge of Inuktut among Inuit up to the age of 34 was much lower in the western Kitikmeot region than elsewhere in Nunavut in 2016.

The report also found that transmission rates for Inuktut in linguistically mixed families is low,

Only about three in 10 children of linguistically mixed couples in Nunavut speak Inuktut as a mother tongue, the StatCan report found.

Nunavut Linguicide Report by on Scribd