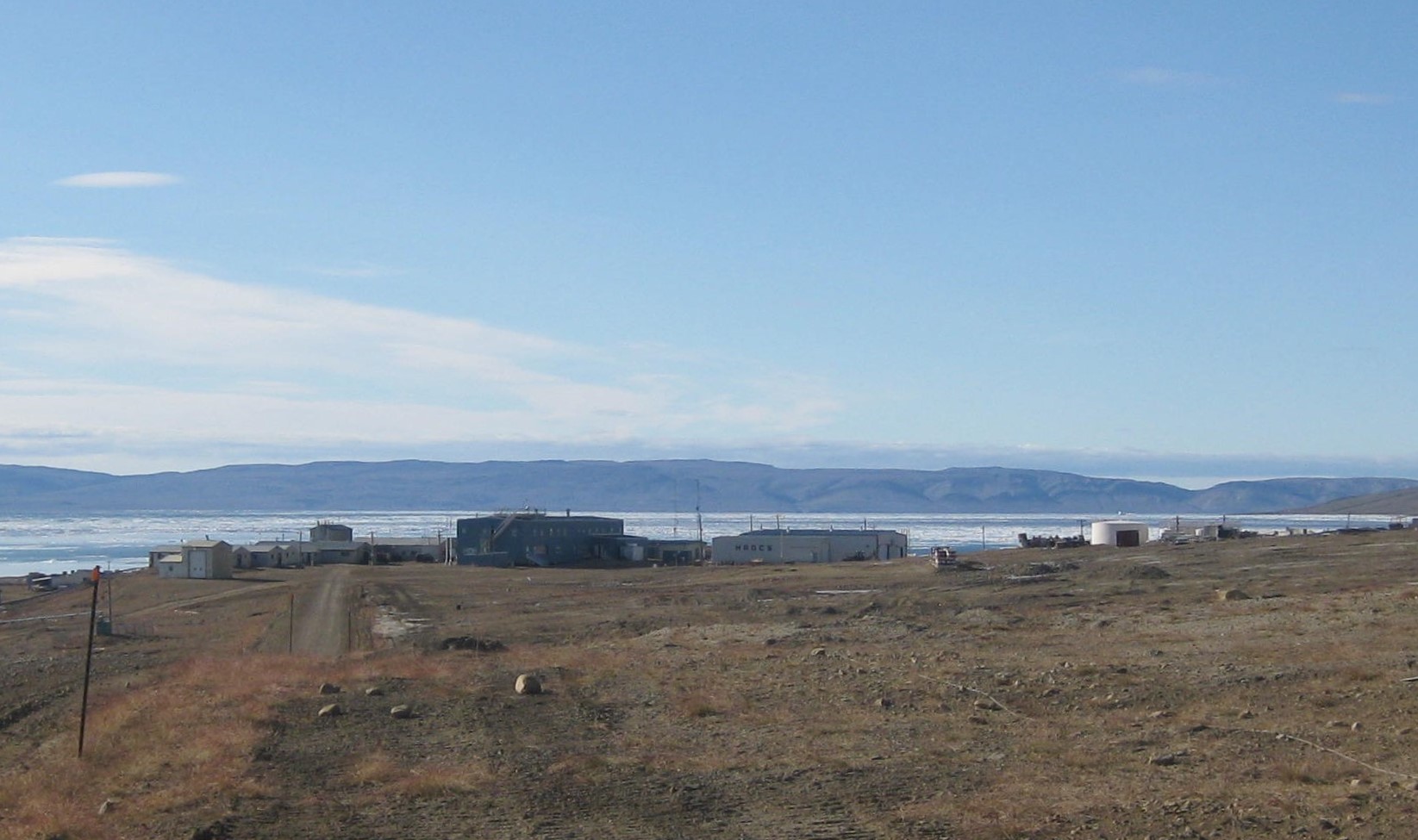 The Eureka Weather Station experienced its hottest July ever, 3.9 C above the 1981-2010 average. (Photo courtesy of Greg Stansfield)

Greg Stansfield and his colleagues had to take some time last month to build a makeshift screen door for the Eureka Weather Station’s kitchen.

Located on the 80th parallel, the station is the second-most northerly in Canada, experiencing average winter temperatures well below -30 C.

But this past July was anything but cold, being the warmest on record since the station opened on Ellesmere Island in 1947.

While Environment and Climate Change Canada doesn’t actively rank which month and year is the hottest or coldest for Eureka because of incomplete data and discrepancies in how and who has collected it over the years, their Canadian Climate Normals data for 1981 to 2010 indicates that the daily average temperature at the station in July is 6.1 C.

Over the course of the month, the station broke six daily temperature records.

While not a record itself, Eureka’s 18.5 C high on July 25 was warmer than the 16.7 C recorded the same day in Victoria, British Columbia.

“It rarely happens that we get temperatures this high,” said Stansfield.

“So when it gets warm like this, the inside of the building is extremely warm. We’ve got all the windows open, all the doors open.”

Meanwhile, across the territory, another 56 daily temperature records were broken last month according to data provided by Environment and Climate Change Canada.

Seven of those, the most anywhere in Nunavut, were in the High Arctic community of Grise Fiord.

Similar to those recorded at the Eureka station, they were a mix of three high maximum records and four high minimums, which collectively averaged 0.8 degrees warmer than the records they beat.

It was the third-warmest July on record for Iqaluit and Baker Lake, which set four and two records respectively.

Coral Harbour, where records have been kept since 1933, set six records throughout the month, all for highest minimum temperature, which ranged from 9.7 C to 11.6 C, roughly 1.4 C warmer on average than the previous records.

Kugaaruk set five records and had an average temperature of 12.8 C last month, three degrees warmer than the 1981-2010 average.

Environment Canada’s recent monthly forecast for August says the higher temperatures are likely to stay in place for much of Nunavut. 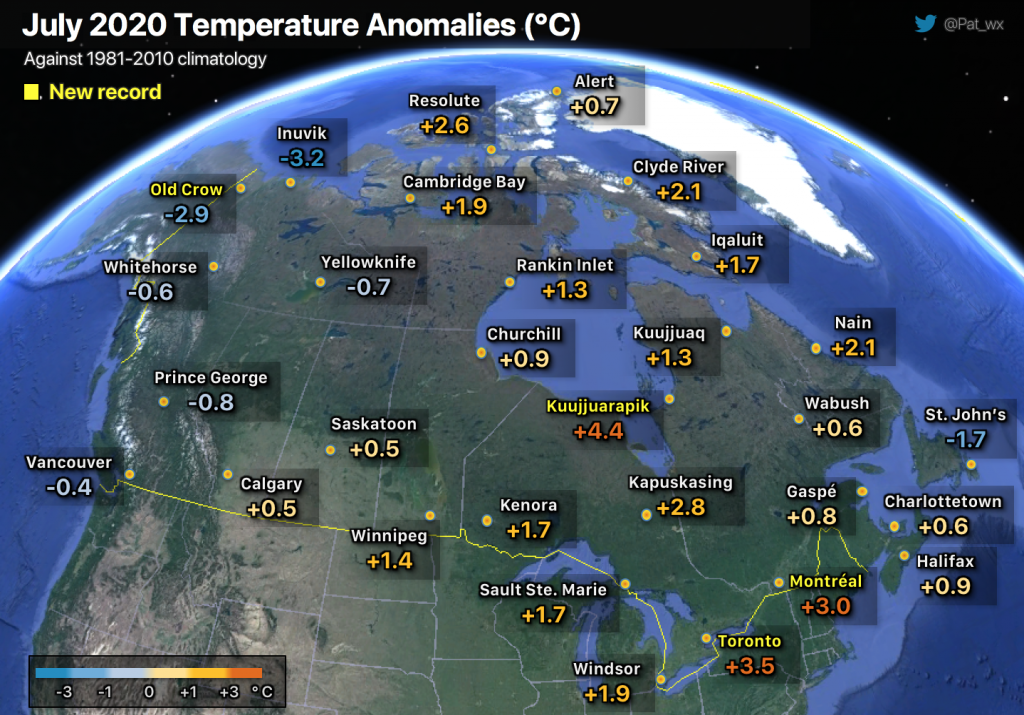 This map prepared by Patrick Duplessis of Dalhousie University shows the various temperature anomalies, or variations from the norm, across Canada for July. (Map courtesy of Patrick Duplessis)

Across the world, July was the third hottest on record, behind 2019 and 2016, according to the Copernicus Climate Change Service.

The Arctic as a whole also continued to be much warmer.

That heatwave peaked on June 20 when the town of Verkhoyansk saw temperatures climb to 38 C.

While temperatures briefly subsided in the weeks that followed, by July 19, parts of Siberia were again experiencing temperatures in excess of 30 C.

July records were also set across the Arctic.

According to Norway’s national meteorological service, the northernmost settlement on the Norwegian archipelago of Svalbard, the town of Longyearbyen, experienced a new record temperature of 21.7 C on July 25.

The average July temperature there is 5.9 C.

By the end of the month, the higher temperatures and lack of sea ice took their toll on Nunavut’s Milne Ice Shelf, causing almost half of it to collapse.

For Longyearbyen, like most Arctic communities that are often close to the water, diminished sea ice will also affect local temperatures, now and also usually into the fall, said Patrick Duplessis a physics Ph.D candidate at Dalhousie University.

“The Arctic on the Siberian side [has] definitely much less ice this year than average,” he said.

“That’s definitely participating in keeping the cold away.”

While the same may be true for Eureka, researchers and scientists say that broader events like the collapse of the Milne Ice Shelf or the heatwave in Siberia would be “almost impossible” without human-caused climate change.

Similarly, temperatures higher in the atmosphere, unlike those on the surface, are generally less constrained or influenced by events such as localized sea-ice melt.

Despite this, records were still set.

According to the Copernicus Climate Change Service, the average temperature roughly 1500 metres above the north pole was 6 C last month, twice as warm as any previous July on record for that level and location.

While a makeshift screen door may have helped the seven staff members of the Eureka Weather Station stay cool last month, the temperatures they experienced, like those seen across the Arctic, will have an impact on the planet as a whole.

“The poles influence weather and climate conditions in lower latitudes where hundreds of millions of people live,” said Petteri Taalas, secretary-general of the World Meteorological Organization, in a July 31 news release.