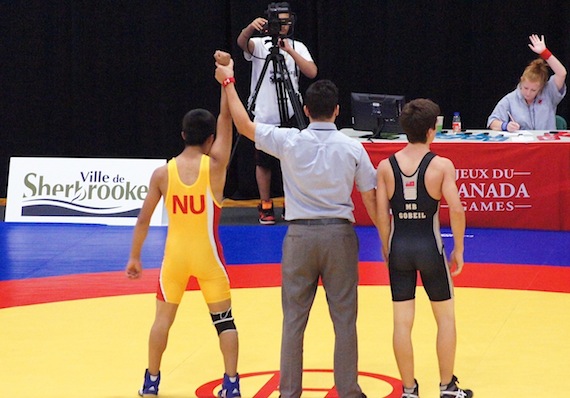 A referee raises the arm of Sandy Saviakjuk of Coral Harbour, one of three wrestlers from Nunavut at the 2013 Canada Summer Games. The 2022 Games will be held in the Niagara Region from August 6 to 22, where Nunavut’s largest team ever will compete in wrestling, beach volleyball and indoor volleyball. (Photo courtesy of Team Nunavut)

Nunavut will send its largest delegation ever to the Canada Summer Games after the COVID-19 pandemic delayed the event by one year.

Community and Government Services Minister David Joanasie announced Monday that up to 65 representatives, including athletes, coaches, youth ambassadors and support staff, will attend the games in the Niagara region of Ontario from August 6 to 22.

The Canada Games, which host summer and winter editions, are considered to be the highest level of competition available for amateur athletes in Canada. The last summer games took place in 2017 in Winnipeg.

Joanaise said this year’s delegation from Nunavut will include the new team additions of beach volleyball and indoor volleyball. Team Nunavut only sent a wrestling team to the previous Canada Summer Games.

Joanasie said the debut of volleyball teams “reflects the development in the Nunavut sport sector.”

The Canada Summer Games were originally scheduled for August 2021, but organizers decided to hold off on the event due to ongoing concerns around COVID-19.

“After two years of limited competition and travel opportunities due to the public health measures in place, I have no doubt this will be a very exciting debut of Team Nunavut and encourage all Nunavummiut to follow along and cheer on our athletes from afar,” Joanasie said.