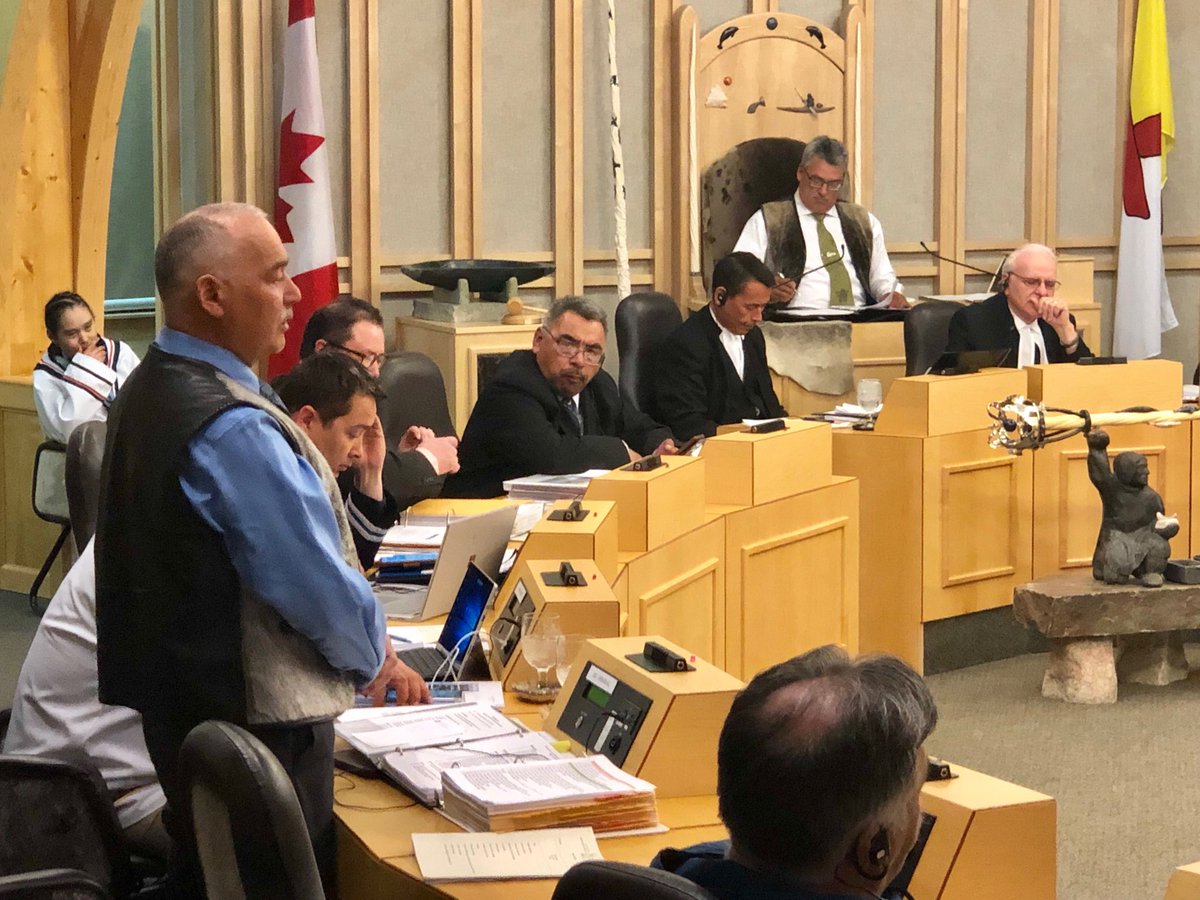 Nunavut’s MLAs will take their sealskin-upholstered seats on Thursday, Oct. 17, for the fall sitting, which is scheduled to wrap up on Nov. 7. (File photo)

After a summer break, Nunavut’s legislative assembly will reconvene for its fall sitting tomorrow, with a long list of items on its agenda.

The session will start with the swearing-in of David Qajaakuttuk Qamaniq, the newly elected MLA from Pond Inlet, at 9 a.m. in the legislature on Thursday, Oct. 17.

Qamaniq won a tight race in the Sept. 16 byelection in the constituency of Tununiq. The byelection was called to fill the vacancy created last March by the death of the riding’s former MLA, Joe Enook, who was serving as Speaker at the time of his passing.

Elisapee Sheutiapik, the government house leader and minister of family services, said the fall session will see a number of bills, some old and some new, come to the table.

During the spring sitting, MLAs finally saw the long-awaited amendments to Bill 25, An Act to Amend the Education Act and the Inuit Language Protection Act.

At the same time, the bill would bring the Inuit Language Protection Act into harmony with the Education Act, and extend the deadline for implementation of bilingual education for Grades 4 to 12 on a phased-in schedule that ends on July 1, 2039.

Bill 25 is expected to be discussed during a two-week televised hearing of a standing committee from Nov. 19 to 28.

But before that, MLAs will discuss Bill 29, an Act to Amend the Labour Standards Act, which received second reading on Sept. 17. It was sent to the standing committee on legislation and is expected to return to the assembly this sitting.

If passed, Bill 29 would make Nunavut Day, July 9, a statutory holiday in the territory. Right now, the day is only an official holiday for public service employees.

One focus of the sitting will be the Government of Nunavut’s capital budget for the 2020-21 fiscal year, which starts next April 1.

Those bills include the following:

John Main, MLA for Arviat North–Whale Cove and chair of the regular members’ caucus, said he expects lots of discussion from MLAs about the capital budget bill.

“Another big concern when it comes to capital projects is how much of the benefit is staying in the territory.”

Main said for him, it is important to scrutinize where projects will go in the territory and with that, where capital dollars are flowing.

“There’s a large number of communities that are waiting for infrastructure projects,” he said.

“Our government can’t be spending money like we have an endless supply of it. Because we don’t.”

The fall session will also see the introduction of Bill 35, the Medical Professional Act, which deals with the regulation and registration of medical professionals in Nunavut, Sheutiapik said.

In 2015, the Government of Nunavut held a review of the territory’s current Mental Health Act. The GN held public consultations on a new, improved piece of legislation in communities across the territory.

The GN released a summary of their review in 2017, but a new act has not been brought to the table until now.

Sheutiapik could not offer many details about the new Mental Health Act, but she said it would discuss, among other things, suicide prevention, mental disorders and individual rights to mental health services.

Main said the regular members’ caucus has had productive discussions over the summer, including those on Bill 25.

“As a caucus, we are getting stronger. We’ve been on the job as MLAs for just about two years now. So I think that members are considerably stronger than they were, particularly the new ones,” Main said.

Both Main and Sheutiapik said they did not think the fall session would go into extended sitting hours.

For Sheutiapik, who represents the riding of Iqaluit-Sinaa, the fall sitting is an opportunity to hear from her fellow MLAs about what their communities need.

“I always look forward to our face to face and to hear about the communities. It kind of helps us in my view. It helps our mandate but hearing those questions helps justify when you make budgets for the upcoming year,” she said.

Paul Quassa, a former premier and current MLA for Aggu, is also expected to introduce a motion during this sitting for a plebiscite on whether to allow the Nunavut public to directly elect the territory’s premier.