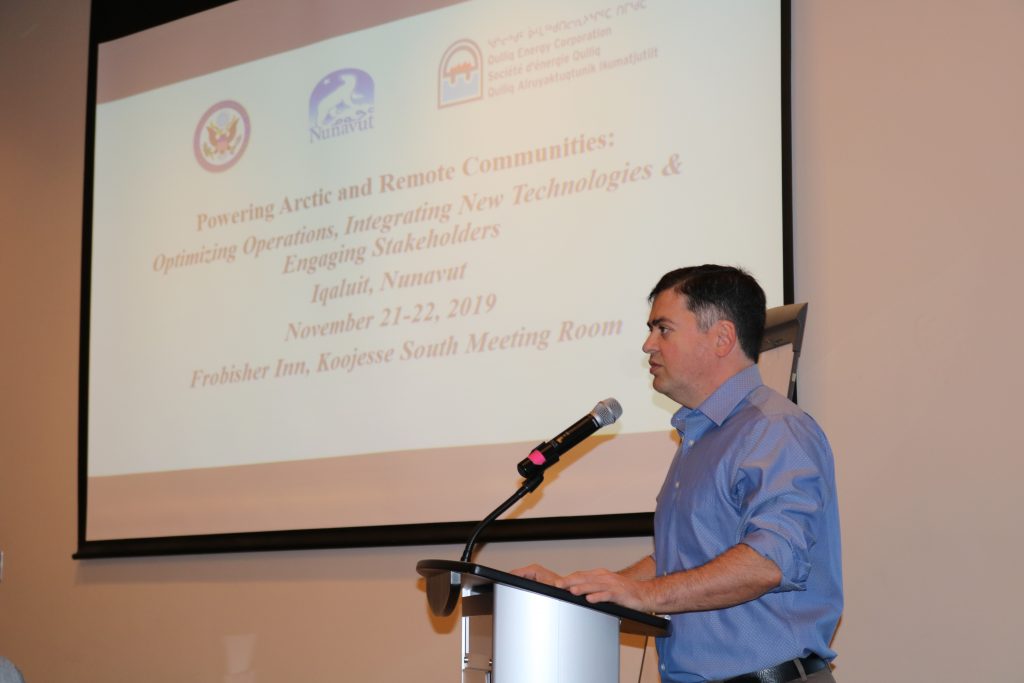 Bruno Pereira, president of the Qulliq Energy Corp., presents at the Powering Arctic and Remote Communities conference in Iqaluit on Nov. 22, 2019. (Photo courtesy of US Consulate General)

Renewable energy experts from across the Arctic gathered in Iqaluit on Nov. 21 and Nov. 22 to share ideas and lessons learned when operating in the North.

Participants from Nunavut, Yukon, the Northwest Territories, Quebec, Newfoundland and Labrador, Greenland and the United States discussed the failures of different projects in their respective regions.

The workshop, called Optimizing Operations, Integrating New Technologies and Engaging Stakeholders, was organized by the U.S. Department of State in partnership with the Government of Nunavut and the Qulliq Energy Corp.

Bruno Pereira, president of QEC, said the workshop was a chance to learn from each other.

“In terms of adopting renewable energy in our communities, we’re very interested in looking at other jurisdictions, seeing what’s made them successful or some of the pitfalls that they’ve encountered,” Pereira said.

Pereira also said that although it was important to bring representatives from Arctic communities together to discuss green energy possibilities, there are different challenges in Nunavut than in Alaska, for example.

“Some of those communities have road access, so they’re not really remote in the context of Nunavut communities. But they face some of the same challenges we face, in terms of logistics, getting the technical skills in those communities, so we do see similarities.”

“So we’ve been able to build about 80 projects in remote communities that include renewable energy on top of the existing diesel grid. So I think we just have a lot of experience now that’s starting to pay off,” Rose said.

That fund, which is designed to promote the development of renewable energy projects, provides benefits to Alaskans by reducing and stabilizing the cost of energy.

Rose said in Southwest Alaska, five communities have worked together to install refurbished wind turbines that they now share energy from.

“So now there’s this cross-pollination of understanding of how to operate and maintain these turbines and they help each other install them,” Rose said.

In Alaska, as in Nunavut, home heating bills are very expensive. Rose said the communities using wind turbines have found a way to use excess wind energy to not only power their homes, but to help heat them too.

“The way they’ve done that is by putting small resistance heaters in people’s homes that are surrounded by ceramic tiles. So when there’s excess wind electricity goes into those heaters, and they’ve essentially built a small smart grid so that the wind heaters can talk to the power plant operators electronically,” Rose said.

“But because those ceramic heaters can store heat, it’s an interruptible load. It can be turned on and off in the home without really impacting the people’s comfort, plus they have a backup heater.”

But in Greenland, installing wind turbines has proved difficult, according to Niels Erik Hagelqvist, a technical special advisor on renewable energy in Nuuk.

Cold temperatures and long periods of darkness make it difficult for wind turbines designed for the south to work in the North, Hagelqvist said.

Hagelqvist said although two turbines that were successful in other parts of the world were installed in northern Greenland, they ended up failing.

“We say in Greenland that we prefer proven technology. Even these two wind turbines we put up, they have been established, one of them in 200 different places in the whole world and the other one 150 different places,” he said.

One of the turbine’s blades fell off, while for the other, the oil used to lubricate its gears became too thick in the cold temperatures and caused the engine to break down, Hagelqvist explained.

During the 2019 federal election campaign, three parties promised that if elected they would get Nunavut off diesel by 2030.

Although it will take some time to develop renewable energy projects that function in the Arctic, Hagelqvist said the need for green energy is urgent.

“We have to do something to replace all the diesel fuel and all the normal oil, because of global warming, because something is going wrong at the moment. It’s a political question if you will have this green energy, because you have the technology but you don’t have the money. You can do it if you have enough money,” he said.

Pereira said there is a lot to learn through discussions with Nunavut’s Arctic neighbours.

“I think it really allows us to consider other options, in terms of how we start a transition process on incorporating renewables. Some people have used some technology and they’ve gone through the process of having failures with things that worked in the south but not in the North. So when we get to the point where the financial situation allows us to adopt some of that, we can maybe avoid some of the pitfalls they’ve gone through,” Pereira said.