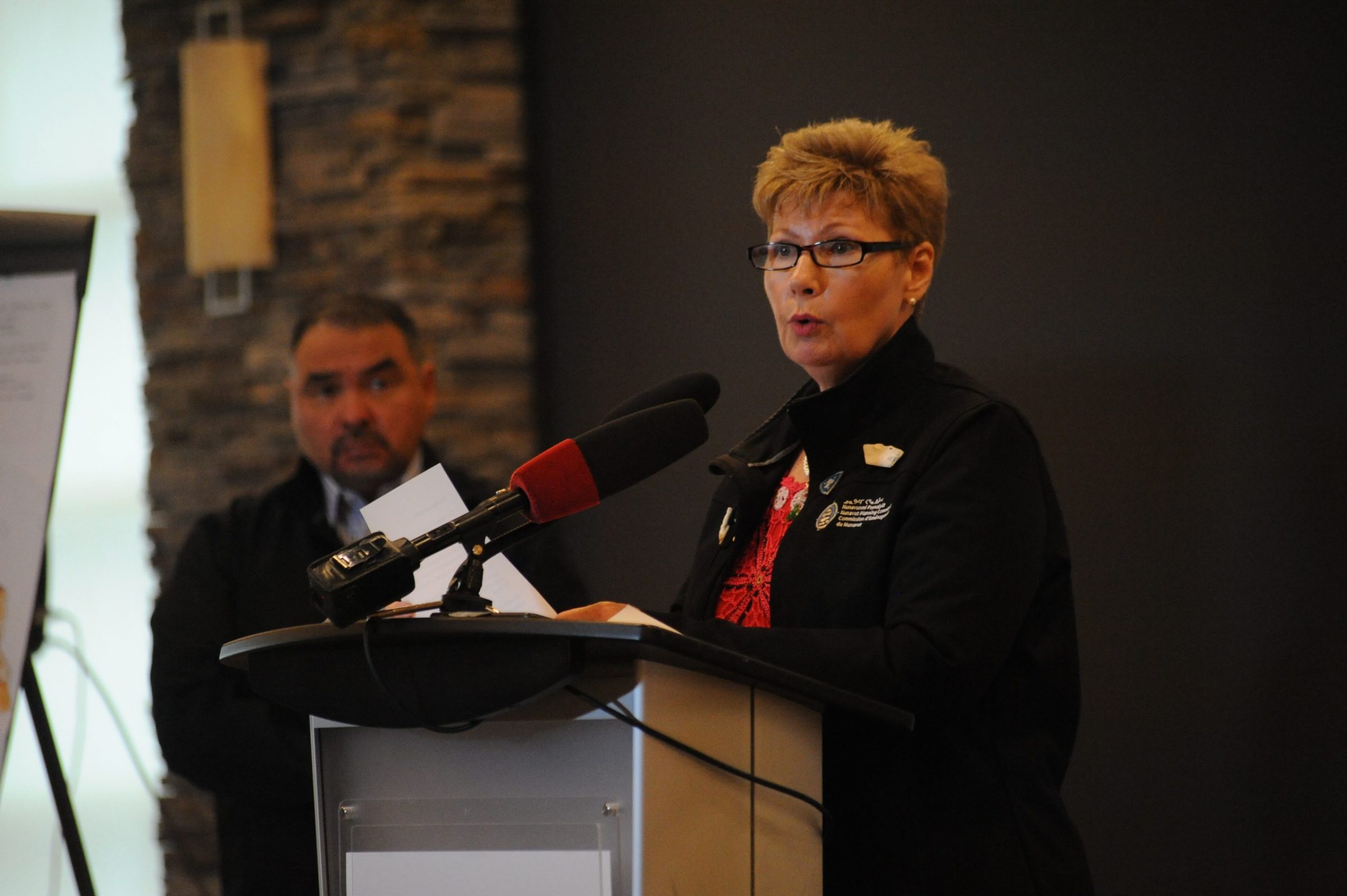 Nunavut Planning Commission executive director Sharon Ehaloak speaks during the unveiling of the territory’s new draft land use plan at the Frobisher Inn in Iqaluit on Thursday. She says the new draft plan balances Inuit culture and economic interests. (Photo by David Venn)

The Nunavut Planning Commission has released a new draft land-use plan for the territory that aims to win over critics with a compromise: more land will be protected but more leeway will be given to companies seeking to develop mineral claims within the territory’s protected areas.

The commission’s last draft plan, released in 2016 but never adopted, drew criticism from Nunavut Tunngavik Inc. and regional Inuit organizations which were opposed to how it would designate 15 per cent of the territory as protected areas, fearing it would prevent the territory from taking advantage of its mineral wealth.

Under the new plan, 22 per cent of the territory would be protected. But the owners of existing mineral claims would be offered more certainty that they would be able to continue with development.

“Nunavummiut are clear that they want long-term preservation and conservation of the land, wildlife and wildlife habitat, and a stronger, more diversified and stable economy,” said the commission’s executive director, Sharon Ehaloak, at the unveiling of the new plan at the Frobisher Inn in Iqaluit on Thursday.

The new plan categorizes land as limited use, conditional use or mixed use.

Mixed use areas, making up 65 per cent of the territory, are the most relaxed zones with no restrictions, said Jonathan Savoy, planning manager for the commission.

Conditional use areas, making up nine per cent of Nunavut, have requirements that projects must fit into, such as operating during particular seasons to protect sensitive areas such as polar bears den or caribou crossings, Savoy said.

Limited use areas are the most restrictive — they’re most similar to what the commission called a “protected area” in its 2016 draft plan — and prohibit industrial and commercial activity year-round.

The Northwest Territories and Nunavut Chamber of Mines had expressed concern that the earlier draft plan would have prevented the development of existing claims in protected areas.

The new plan, which includes broader provisions for existing projects to be grandfathered in, “provides certainty to the industry,” Ehaloak said.

The commission plans to hold public hearings on the new draft plan in the Kivalliq and Kitikmeot in November and potentially Pond Inlet and Iqaluit in early 2022 if it is granted more money.

After that, the commission may make changes to the draft plan, depending on feedback, and then ask for approval from the federal and Nunavut governments and NTI, which all have to agree for the plan to take effect.