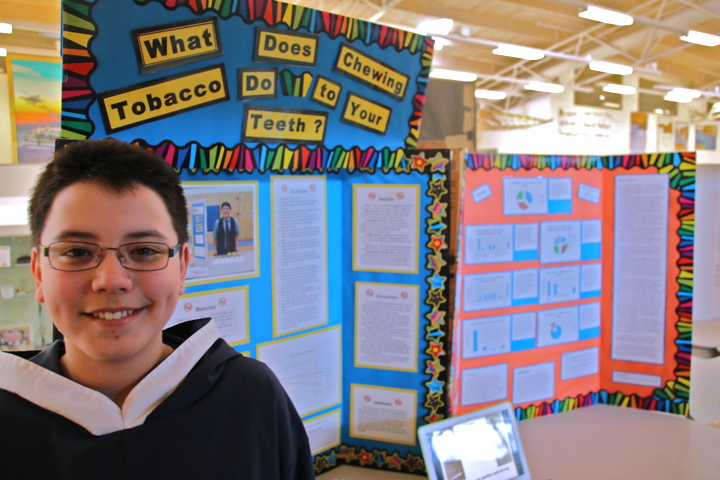 Jordan Takkiruq was the 2015 winner of the Kitikmeot Science Fair. Nunavut’s Qikiqtaaluk region has not had a science fair in 18 years—until now. (FILE PHOTO)

This Friday, the first Nunavut students’ science fair to be held in the Baffin region in nearly 20 years will be held virtually. The Qikiqtaalummi Science Fair judges will evaluate student video submissions from afar, and while that process will not be streamed for the public, the judges will share updates via social media.

Three winners, to be announced on Monday, will get to go to Fredericton, New Brunswick for a week focused on STEM, or science, technology, engineering and math, starting on May 11.

“It’s a great week of learning that a lot of students in our region may not (otherwise) have access to,” said Tara Vanderveer, secretary of the Qikiqtaalummi Science Fair.

Every school in the region with students in grades 7 to 12 was invited to enter three students into the competition. So far, nine applicants have submitted a video file of their science project.

The winners will spend the first few days of their trip in May at the national science fair. Later, the students will sit in on university workshops on topics such as robotics and using science in art. They’ll also have the chance to learn about oceans, do experiments and go to cultural events.

Besides learning about STEM topics, the students will get to make new friends and make life-long connections, Vanderveer said.

The trip will be paid for in part by Youth Science Canada. To cover the remaining costs of about $2,000 per person for five people, a Gofundme fundraising campaign was set up for the three selected students and the two chaperones to take this trip.

Vanderveer says this first virtual science fair in 18 years in the Qikiqtaaluk region is going to help students who are passionate about STEM pursue their dreams. By taking the trip to Fredericton to the nationals, those students will be able to “expand their horizons” and get inspired.

There are a lot of trips for students to play sports, but not many for science, she says.

“I think any student that has an interest in science should be encouraged,” Vanderveer said.

“We love this idea of fostering science about Nunavut by Nunavummiut.”