“Retailers can sell subsidized food for any price they see fit. And they do.” 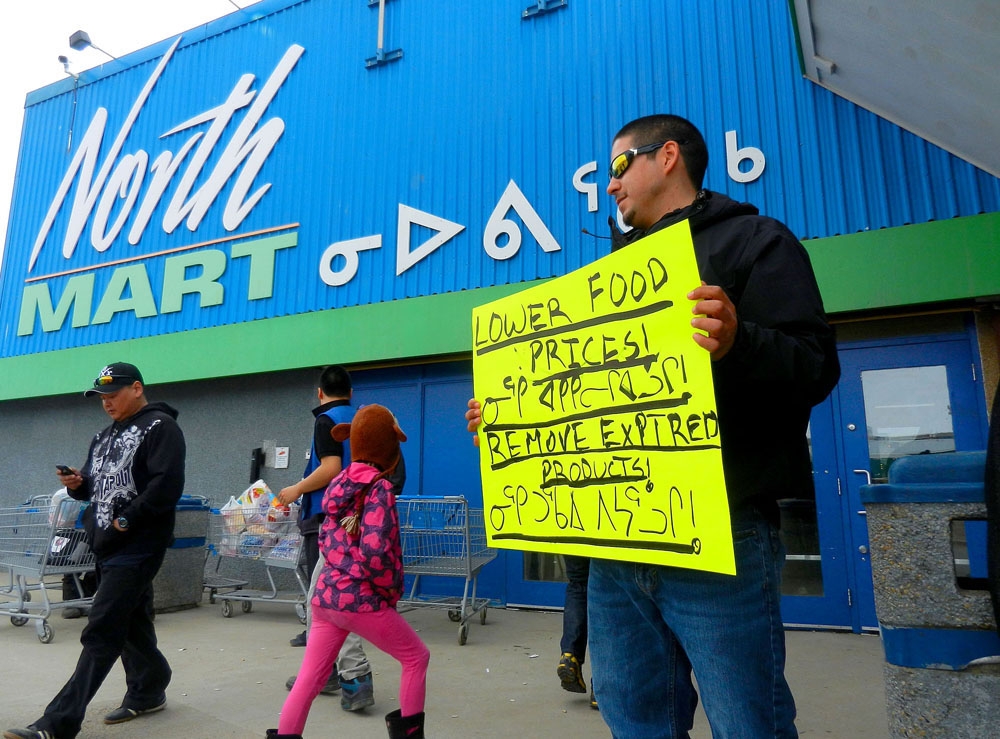 An Iqaluit man stands at the entrance to the Northmart store, protesting food prices. (FILE PHOTO)

The Government of Canada suffers from an image problem.

It currently spends $100 million a year to subsidize shipments of staple food items to remote, northern communities, yet nearly every day, news and social media sites are bombarded by photos of high-cost food for sale in northern stores.

On Monday, the federal government announced a long-awaited update to the Nutrition North Canada subsidy program.

The update included higher subsidy rates for staple food items, support to help smaller retailers show subsidy levels on their receipts, and an improved framework for working relations with Inuit.

Sadly, none of these changes will improve the government’s image with northern consumers. The problem lies with the way the subsidy is built.

Northern retailers receive a subsidy for every kilogram of staple food they ship to northern communities. End of story. There are no rules about pricing. None.

Retailers can sell subsidized food for any price they see fit. And they do.

Prices differ between stores, between eligible communities, between provinces and territories.

Subsidized foods are sold for vastly different prices depending on where and when shoppers buy goods. There is nothing in the current federal subsidy program to prevent this from happening.

So, while this week’s changes may result in more food being on the shelves of northern grocery stores, there is no guarantee that food will have price labels people can afford.

The core of the problem is that northern markets have very few players: few retailers, few airlines, in reality, very little competition for every item or service sold.

This near-monopoly requires a different form of regulation from southern markets, one the federal government is reluctant to embrace.

There have been calls for substantive changes to Nutrition North Canada since it was implemented in 2011. This week’s announcement was a chance to address the fundamental problem with the subsidy: its failure to hold retailers accountable for the taxpayer dollars they receive.

The federal government chose instead to window-dress the problem with changes that ensure government money continues to flow into the coffers of a few retail corporations, rather than into the pockets of hard-hit northern consumers.

My message to the Government of Canada is simple: Nutrition North Canada is a public policy disaster that will have long-term consequences for the federal government across the North and among Canadian taxpayers concerned about how their hard-earned dollars are spent.

Fix this program now by regulating pricing. That will help your image.

Tracey Galloway is a professor at the University of Toronto, Mississauga. Her research examines the impact of federal policies such as Nutrition North Canada on the health and well-being of Indigenous people.