Ocean plastics continue to impact some Arctic seabirds more than others: study 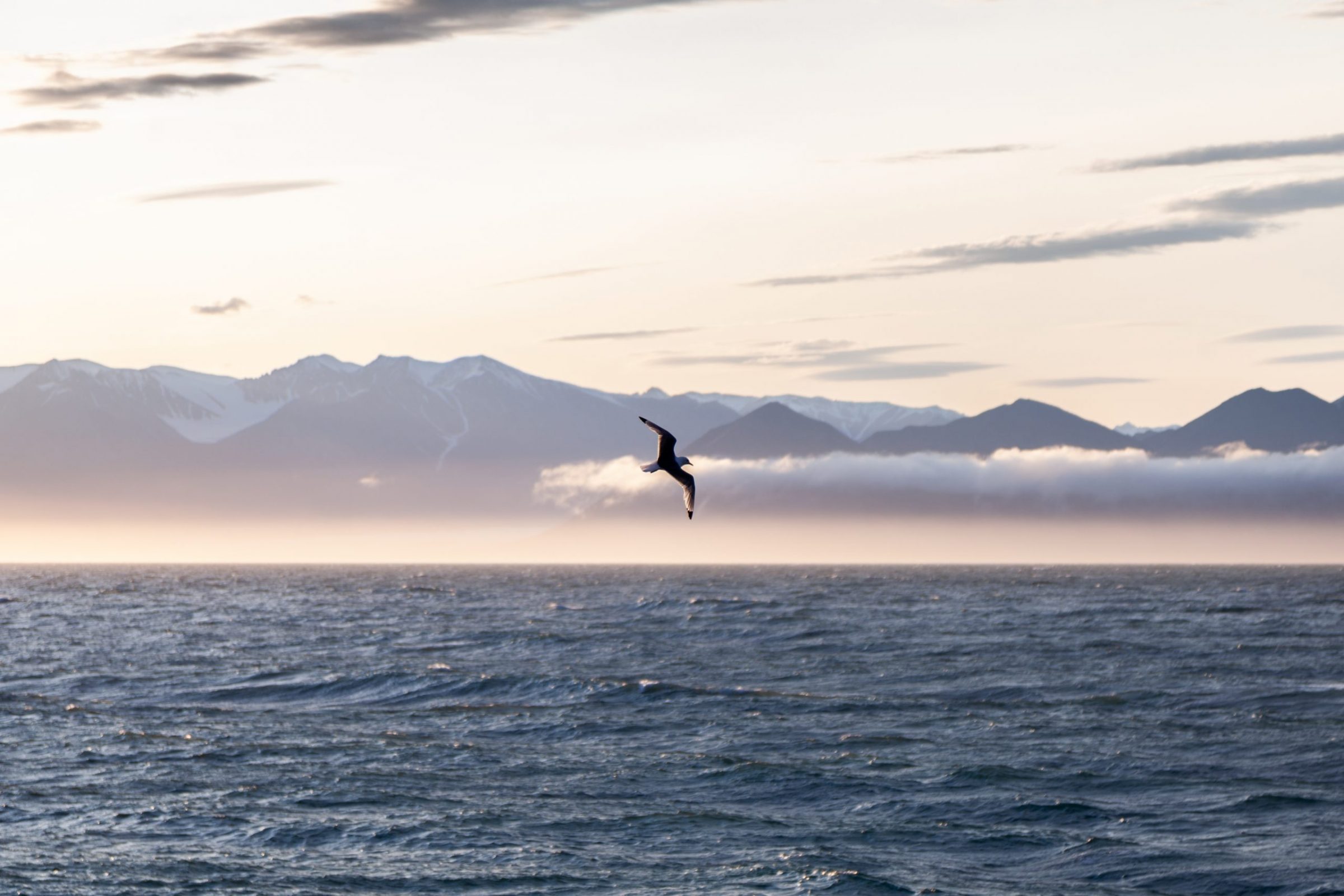 Some Arctic seabirds such as the black-legged kittiwake, seen here, are more susceptible to ingesting plastics than other birds that call the Arctic home. (Photo courtesy of Julia Baak)

Although it’s understood that plastics are in the Arctic and that some birds are more at risk of ingesting them, less is known about how this has changed over time.

A new study published last month in the journal Marine Pollution Bulletin sought to change that by examining four different species of Arctic seabirds for plastics larger than one millimetre in size and comparing those findings to data from a decade ago.

“We now have a baseline of what the trends of plastic ingestion are,” said Julia Baak, the paper’s lead author and a master’s student studying biology at Acadia University in Nova Scotia.

Baak examined 20 black-legged kittiwakes, 30 thick-billed murres, 20 black guillemots and 29 northern fulmars, all of which were collected by Qikiqtarjuaq hunters from the Nattivak Hunters and Trappers Association in collaboration with Acadia researchers.

The findings were mixed.

“Of all the studies in the Arctic so far, to our knowledge, we report the highest frequency of occurrence in kittiwakes,” said Baak.

According to the paper, the occurrence of plastics in kittiwakes was previously as high as 13 per cent, while Baak found that 15 per cent of the birds contained plastics.

Other species, like the guillemots and murres, showed no signs of plastics and no change over time.

“Guillemots, to my knowledge, have never had plastics in the Arctic.”

This is because of where ocean plastics tend to be dispersed within the ocean.

“Plastics are generally distributed on the surface or at the bottom, there’s not as many plastics in the middle of the water column,” said Baak.

Birds like black guillemots and thick-billed murres are divers that pursue fish well below the surface but above the sea floor, meaning they’re less likely to encounter plastics.

Fulmars are notorious for consuming plastics.

“One of the problems with these [plastics] is if a bird which is so long lived, like these fulmars, accumulate so much plastic, it won’t be able to have food pass through their digestive system and it could die of starvation,” said Baak.

“We have seen this happen before.” 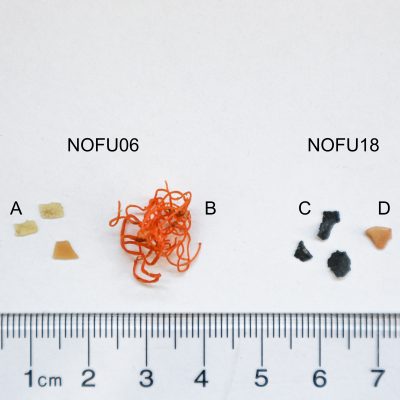 When Baak first found this thread ball in one of the fulmars, she didn’t know it was plastic. “All of the food that the bird was eating got caught up in this thread, so I pulled out a very large ball of food,” said Baak. While the food would eventually break down, the danger with plastics like these is that they can trick the bird into thinking it’s full to the point where it won’t eat or prevent it from getting any other food down, both of which could lead to an early death. (Photo courtesy of Julia Baak)

But what Baak found in the fulmar samples wasn’t what was expected.

“Normally, the frequency of occurrence of plastic in fulmars has increased over time. Back in the ‘80s, it was about 40 per cent and now you’re seeing numbers upwards of 79 to 89 per cent and there’s other areas in the Arctic where fulmars are ingesting over 90,” said Baak.

“We expected that plastics probably would increase with fulmars but they did not.”

What Baak found was that while the same number of northern fulmars, 72 per cent, are still ingesting plastics, the number and mass of the pieces decreased from 2007 to 2018.

“This could be from the fact that as plastics stay in the ocean, they start to break down into a lot smaller pieces,” said Baak.

Another possible reason for these changes in the amount of plastic found in the fulmars and kittiwakes is the small sample size, a caveat of her research, says Baak.

Jan van Franeker, a biologist with Wageningen Marine Research in the Netherlands who was not involved with the paper, agrees.

“In the Netherlands … to give a reasonable figure, you would need about 40 birds per year,” said Van Franeker, who also noted that in other geographic regions that number may be different.

A 2015 paper on the subject written by Jennifer Provencher, who was also involved with this current study, demonstrated that even different colonies of the same species of bird within Canada could require vastly different sample sizes due to higher levels of plastic ingestion in certain areas.

According to that paper, the minimum number of birds required annually for each ocean, the Atlantic, Pacific, and Arctic, is the same as in the Netherlands, 40.

However for fulmars that live in the Arctic, Provencher recommends that up to approximately 80 birds would be needed annually.

This is because fulmars that live at higher latitudes ingest less plastic that those in southern regions.

Geographic differences may also be a reason behind the change in the number of plastics over time.

“Because these birds can be caught at a colony but forage at different locations, it’s also possible that some are getting more plastic than others,” said Baak.

The bigger issue that the study sheds light on goes beyond the birds themselves.

“It’s not about the fulmar, the fulmar is just the messenger,” said Van Franeker. 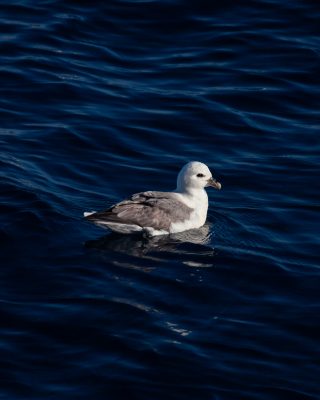 Although similar in appearance to gulls, northern fulmars are actually more closely related to petrels and albatrosses. (Photo courtesy of Julia Baak)

“For a government, if they aim to reduce the abundance of marine litter, you need monitoring systems to see that happening and the stomach contents of fulmars is one of the most simple
ways to do this.”

While other animals such as belugas and seals have been studied for plastics, the amount of plastic ingested by seabirds like the fulmar have made it, in the eyes of scientists like Baak and Van Franeker, an indicator species.

The birds aren’t just a means of tracking marine litter, they’re also a way of monitoring chemical pollution, which is Baak’s next step, looking at plastic-associated contaminants in the tissues of these birds.

“Seabirds give us an overarching look at what plastics could be in the marine environment.”

Although there are some studies currently looking at plastics and contaminants in fish, using the birds as indicators of these issues is easier and, more importantly, also relevant to humans.

“The important things about seabirds is that they eat a lot of fish and so do people in northern communities,” said Baak.

“So human health risk is always a slight concern.”

Now that the plastic ingestion baseline has been updated, the other next steps should involve regular long-term monitoring using the same standardized methods, says Baak.

Van Franeker also agrees with the need for continued monitoring, though he would like to see the collection method change.

“I would advise to put serious effort in [making] contacts with longline fisheries and getting the birds from them,” he said.

“They fish the same areas every year in about the same time, so there’s a lot of variables that you can cover in using longline bycatch.”

For Van Franeker, changing the collection method from hunting the birds to utilizing bycatch would also increase the sample size and speed up the timeframe to establish statistical proof.

Despite this, he also acknowledges that the amount of plastics found in fulmar stomachs in the North Sea is slowly decreasing.

“It is getting better,” said Van Franeker.

“So in that sense, [this study] fits the larger picture.”