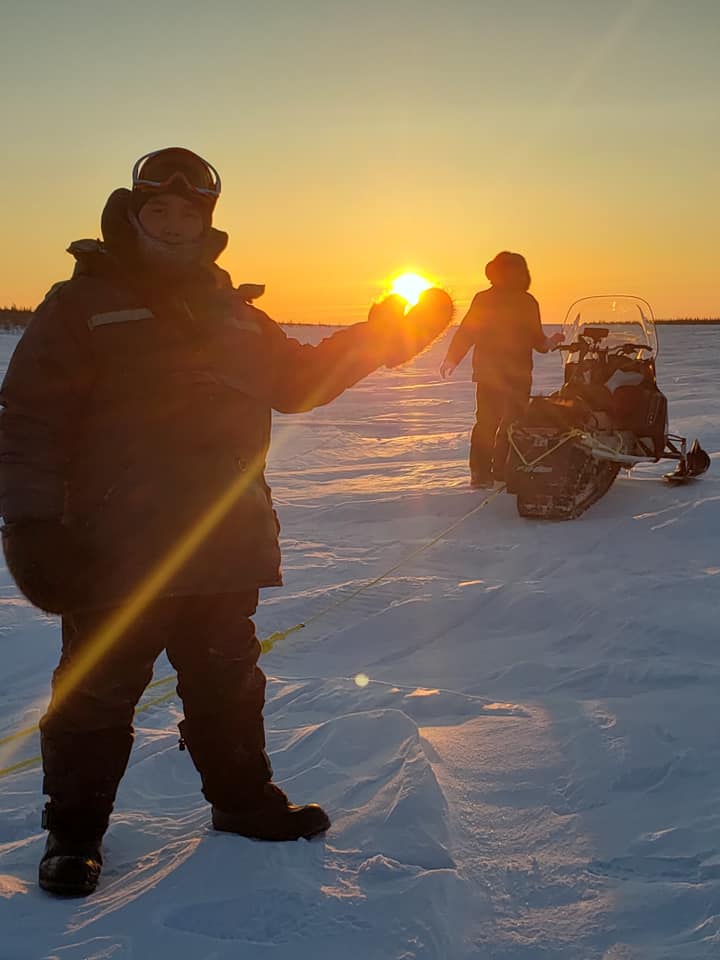 Danny Kigusiutnak and Andrew Muckpah are seen out on the land near Arviat in mid-March. (Photo submitted by the Young Hunters Program)

On the land during a pandemic

A program in Arviat is responding to the COVID-19 pandemic using the principles of Inuit Qaujimajatuqangit, or the Inuit way of knowing.

The Young Hunters Program is run by the Aqqiumavvik Society, which executive director Kukik Baker calls a non-profit society that focuses on well-being and research.

In mid-March, schools and programming around Nunavut ground to a halt, including a men’s group run by the society.

“But when we looked at the Young Hunters Program … we decided it would be more beneficial for the kids to take longer land trips before any sickness came to our area,” Baker said.

She said organizers made sure that none of the children or their family members were feeling sick. The board of the society and the health centre approved the trip. They decided to take a smaller group than usual.

While most people in the world hunkered down and got used to doing schoolwork and their jobs from home, the group of young men went out on the land for a week.

They caught caribou, wolverines, wolves and foxes. Baker said they were looking for muskox, but didn’t find any. But they did get to see where their ancestors used to live on the land.

“So that was very touching for them,” Baker said, “being able to see where their grandparents grew up and the log cabins where their families came from.”

Baker said it was better for the children to go out on the land, rather than “sitting in town waiting for sickness to come, and have nothing to do and be bored all day.”

Even though the world is going through turmoil, Baker said, going out teaches young people that they can ground themselves and connect with the land.

“Because the land is very healing,” she said. “It doesn’t matter if it’s physical or mental healing, it’s [a] connection Inuit have with the land that creates a sense of healing for them.”

Baker said learning hunting skills, and about the connection between land and healing, is a way to give young people a sense that the pandemic is not the only thing going on in the world. It gives them a means to accept what they cannot control, and continue to move forward.

“A lot of planning, preparing and forward thinking, which are all Inuit Qaujimajatuqangit values,” Baker said. “Our foundational laws.”

The Young Hunters Program was started in 2012 as a way to teach young people between the ages of eight and 18 traditional skills, and to provide country food to households in Arviat.

It wasn’t meant to benefit mental health, Baker said, but she said that they realized when they evaluated the program after the first year that physical and mental health benefits were a spinoff from the program. 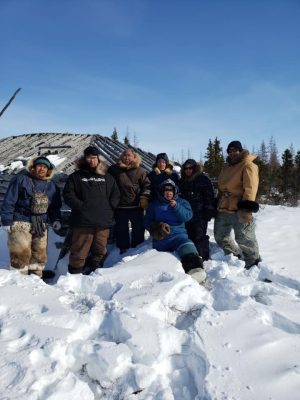 Then they go into a workshop and learn how to make traditional tools.

The third part of the program ties it all together—participants go out on the land, taking the knowledge they learned in the classroom and using the tools they built.

Baker talks about how the program has evolved over the years. In the beginning, she said an elder noticed that the young people didn’t know how to watch weather, look out for animals or track the movement of the stars.

So the elders started to teach the youth how to develop those skills, Baker said, “so they’re being observant and noticing the changes that are happening around them in the world, and being able to adapt to those changes.”

That value is one of the reasons the society decided it was important for the program to be active in the face of COVID-19.

The main goal of the program now is to “have our kids to be able to see things in a different light and notice things that most other people don’t notice,” Baker said.

Since the last fiscal year, the international men’s health organization, Movember, has been helping to fund the Young Hunters Program.

Sonia Prevost-Derbecker, the global director of Movember’s Indigenous file, who is based in Winnipeg, said she and Baker had many conversations when they realized that COVID-19 would be a concern for every community in Canada.

They realized it was a good opportunity for youth in Arviat to get out on the land when most other people were self-isolating.

“It’s like isolating as a pod, it’s isolation without isolation.” Prevost-Derbecker said. “Your safe way to isolate.”

They plan to send another smaller group out next week for another week-long trip.

“You’d think [as] there’s no school they’d be typical teenagers where they don’t want to get up ‘til after lunch,” Baker said. “I’ve come to unlock the door and there’s kids already waiting outside, they’re so happy to be able to do these activities.”