One month into MP Qaqqaq’s leave, still unclear how Nunavut’s voice will be heard 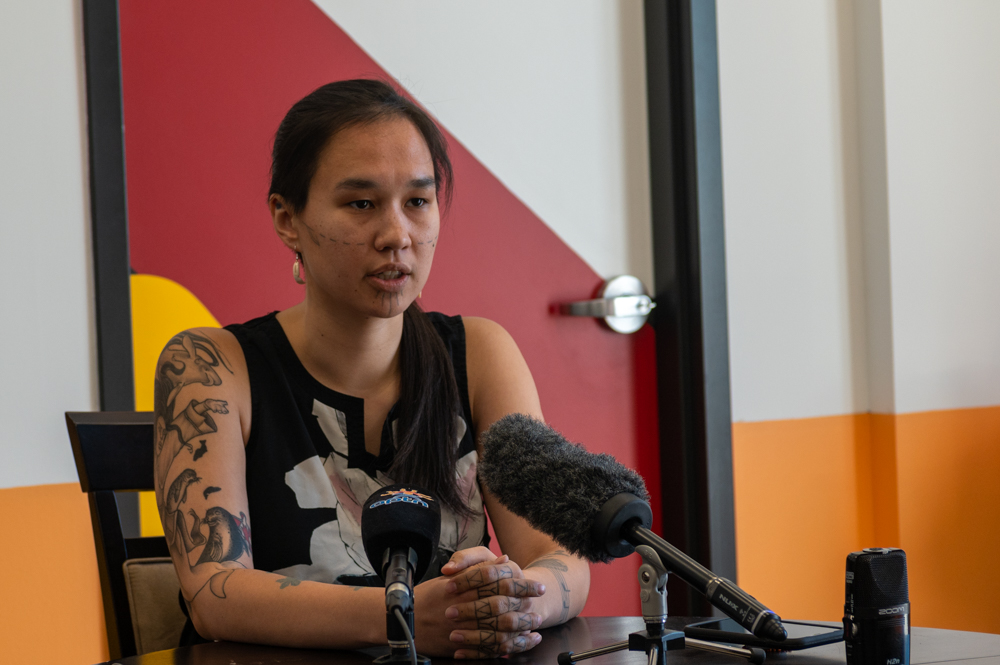 Nunavut’s member of Parliament, Mumilaaq Qaqqaq, seen in this August 2020 file photo, says she will seek a second term representing the territory in the House of Commons. (Nunatsiaq News file photo by Meagan Deuling)

Halfway through Nunavut MP Mumilaaq Qaqqaq’s leave of absence and three weeks after a report on housing conditions that “cannot wait any longer” was promised, it is unclear how the territory’s voice will be heard in Parliament until her return.

One month ago, on Oct. 23, the NDP announced Qaqqaq’s eight-week leave of absence for “personal” health reasons. Very little details have been given, except that Qaqqaq’s condition is not COVID-19 related.

Because Qaqqaq is Nunavut’s only member of Parliament, the territory’s only official representative in Parliament is now Conservative Senator Dennis Patterson.

Qaqqaq did not appoint a representative to take her place during her absence, said NDP House Leader Peter Julian.

But Julian said that the NDP will take a “team approach” to making sure Nunavut’s voice is heard.

“It’s important for people in Nunavut to know the NDP will continue to bring up issues that matter to them,” he said.

NDP leader Jagmeet Singh said in a tweet Nov. 19, that he assured the premier of Nunavut, Joe Savikataaq, he is ready to support the people of Nunavut but gave no details about how he would support them.

Today, I spoke with the Premier of Nunavut

Whether testing, housing or resources, I assured Premier @JSavikataaq that I stand ready to support him and the ppl of Nunavut pic.twitter.com/wYVcRwh5Rr

Yesterday, Qaqqaq addressed her constituents in a tweet for the first time since her leave, following a spike in COVID-19 cases in Nunavut.

My time off has been much needed. A quick check in to say I’m fine. As numbers rise and Christmas approaches let’s think of those we love and want to keep safe.
Happy holidays and I’ll be back before you know it. All my love 🧡

“My time off has been much needed,” she said. “I’ll be back before you know it.”

In the House of Commons Oct. 2, Qaqqaq said she would present a report on the “inhumane” housing conditions in Nunavut “in the coming weeks.” This was three weeks before she went on leave.

The report would follow Qaqqaq’s housing tour in the Kivalliq and Kitikmeot regions where she saw “homes where babies and young children were living that were overcrowded and mould-ridden, and that had not been renovated in years.”

“Inuit and Nunavummiut cannot wait any longer,” she said.

Julian would not confirm whether the report would be delayed by Qaqqaq’s absence, but said it would have to be done right to do the serious issue justice over the coming “weeks or months” before its release.

Her leave technically ends on Dec. 21, but MP Qaqqaq may not need to be back in Ottawa until the end of January, as Parliament is scheduled to take a break until Jan. 25 after a sitting in mid-December.

“There is no doubt that Nunavut would see a major drop in deaths by suicide if the federal government would just honour their obligations and provide adequate housing,” said Qaqqaq in the statement where she first announced her leave.

Qaqqaq, elected in 2019, is one of Canada’s youngest members of parliament at 25 years old, which is the average age of the population of Nunavut.