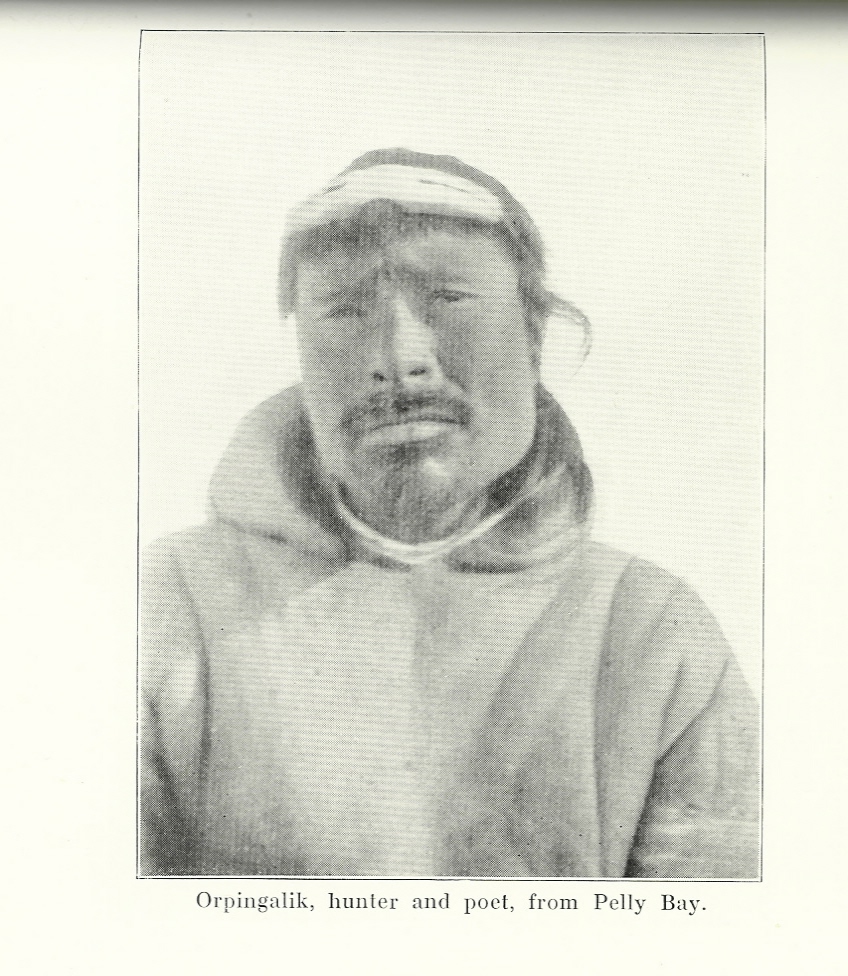 Orpingalik and the power of magic words

In all his meetings with Inuit on his journey over the top of North America, Knud Rasmussen busied himself with documenting their beliefs, legends, songs, taboos and magic words.

He was particularly interested in true stories from their lives. This was the case when he had the good fortune to meet the hunter and poet Orpingalik.

A year before Rasmussen met him, Orpingalik had suffered a tragedy and lost one of his sons, Inugjaq.

On a journey in the interior, Orpingalik and his youngest son had been ferrying their belongings on an ice pan over a wide, swift-running river.

The current was strong and suddenly it caught the pan and forced one side down so deep into the river that it turned over. Both father and son were immediately at the mercy of the river, which carried them downstream.

Orpingalik was knocked unconscious against a rock. When he came to, he was lying half in the water and half on the river bank, his head being knocked against a stone by the regular wash of the waves.

The pain quickly brought him to his senses and a glance at the sun told him he had been unconscious for some time. Suddenly, he realized his circumstances and began to look frantically for his son. He found Inugjaq further down the river.

“He carried him up to the bank and tried to call him to life with a magic song. It was not long before a caterpillar crawled up on the face of the corpse and began to go round its mouth, round and round. Not long afterwards the son began to breathe very faintly, and then other small creatures of the earth crawled on to his face, and this was a sign that he would come to life again.

“But in his joy Orpingalik went home to his tent and brought his wife to help him, taking with him a sleeping skin to lay their son on while working to revive him. But hardly had the skin touched the son when he ceased breathing, and it was impossible to put life into him again.

“Later on it turned out that the reason why the magic words had lost their power was that in the sleeping skin there was a patch that had once been touched by a menstruating woman, and her uncleanness had made the magic words powerless and killed the son.”

“People say that the ice floe on which Orpingalik was crossing the river was so large that it ought not to have capsized in the current. But they say that it was as if the floe suddenly met with some resistance that forced it down under the waters of the river.

“Therefore it is believed that the cause of the disaster was magic words, bad magic words that rebounded upon their own master: irinaliut utirtuq inungminut.”

Qaqortingneq offered Rasmussen an explanation of what he assumed to be the cause of the ill fortune that had befallen Orpingalik and cost the life of his son. Uncharacteristically, it involved a white man, but this is perhaps indicative of the rapid culture change that was beginning to occur in that isolated part of the Arctic.

During the previous year, Capt. Jean Berthie, a trader with the Hudson’s Bay Company, had made a trip to Pelly Bay to trade. Orpingalik’s son, Inugjaq, was blamed for tampering with one of the trader’s observation instruments that lay on his sled, and the trader scolded the young man.

Orpingalik felt offended by this, but said nothing to the trader. Instead, he composed some evil magic words that were intended to kill Berthie before the end of the year. But the words had not been powerful enough to do the job.

Qaqortingneq explained that “a formula of wicked words like that must kill if there is any power in it; and if it does not kill the one it is made for, it turns against its creator, and if it cannot kill him either, one of his nearest must pay with his life.”

The Inuit believed, quite simply, that Berthie was a greater shaman than Orpingalik, and that the magic words had no choice but to turn against their source. But Orpingalik was also a shaman of some repute — when the evil words were unable to kill him also, they turned against and killed his son.

Berthie spoke Inuktitut well and was apparently a popular man among the Inuit. But he was unaware of any of this, or of the shamanic power that had been ascribed him by the Inuit. He had scolded the young man and that, as far as he knew, was the end of it.

Rasmussen, always analytical, found this whole episode to be illustrative of two characteristics of Inuit: the habit of concealing anger while contemplating revenge, and the exaggerated family feeling of “sirnaaneq,” which ensures an Inuk will always side with his family.

Rasmussen observed simply and in conclusion, “They do not tolerate having their children corrected by others.”

On April 5, when Rasmussen’s time at Orpingalik’s camp was at an end, everyone broke camp. Orpingalik and his family would continue on to Repulse Bay to trade.

Rasmussen and his companions would sled westward with the hope of meeting Orpingalik’s son, Igsivalitaq. When the two parties were a little distance apart, Orpingalik’s group stopped and waved their hands.

The shaman’s son, Kanajoq, called out, “May we all travel without evil spirits following us!”