Ottawa mayoral contender shoring up support on backs of Nunavummiut 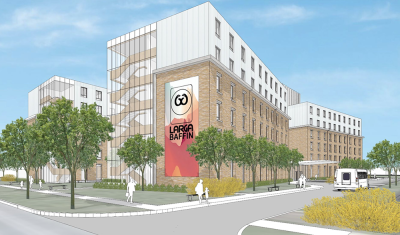 A new 220-room Larga Baffin building, depicted in this artist’s drawing, proposed to be built in Ottawa, ran into resistance from the city councillor who represents the ward where it could go, along with objections from people who live in the area. (Image courtesy of Larga Baffin)

Ottawa mayor-wannabe Diane Deans appears to be shoring up her support base at the expense of the well-being of Nunavummiut, who need the services Larga Baffin provides.

Deans is the city councillor for the area in Ottawa where Larga Baffin wants to build a new 220-room boarding house for Nunavummiut to stay in when they go south for medical treatment.

News reports say Deans is going to run for mayor this fall. There will be a wide-open race to replace longtime Mayor Jim Watson, who is not running again. Candidates can officially register to put their name on the ballot starting Monday.

Deans threw cold water on Larga Baffin’s proposal at a virtual public meeting Tuesday, saying she objects to the plan “in its current form.”

That’s politician-code for “No… but I don’t want to be seen saying no. And I want to leave some wiggle room.”

She objects to its height and how much space it would take up.

She took the side of some residents who said Larga Baffin’s proposal is too tall, has too many rooms and will create too much traffic in the immediate area, which is mostly residential.

The opposition is classic not-in-my-backyard syndrome.

Deans’ opposition could be a hurdle for Larga Baffin. A thumbs-down from the well-connected councillor could set the tone when the proposal comes to a vote at a planning committee meeting, and ultimately when it’s time for city council to make a final decision.

Her opposition could be a cynical political move — but a shrewd one. Larga Baffin’s users don’t vote in Ottawa. Area residents do. In a crowded mayoral race, she will need the backing of people in her own ward.

As the capital, Ottawa gets the honour of hosting national institutions, such as the National Arts Centre and National Gallery of Canada, that other Canadian cities don’t.

Not to mention the 100,000-plus handsomely paid federal public servants who insulate the city from unemployment, guarantee a high quality of life and ensure steadily rising property values.

So, Ottawa benefits from being Canada’s capital. In exchange, there should be a readiness to be its brother’s keeper when it comes to providing services that other communities can’t.

It would be wonderful if Nunavut’s health-care infrastructure were robust enough to meet the needs of Nunavummiut at home. The reality, of course, is that it’s not.

As Nunavut’s population grows and the demand for health services increases, it will take decades before the territory is able to meet those needs on its land.

Welcoming a new Larga Baffin building is one little thing Ottawa can do to help Nunavummiut.