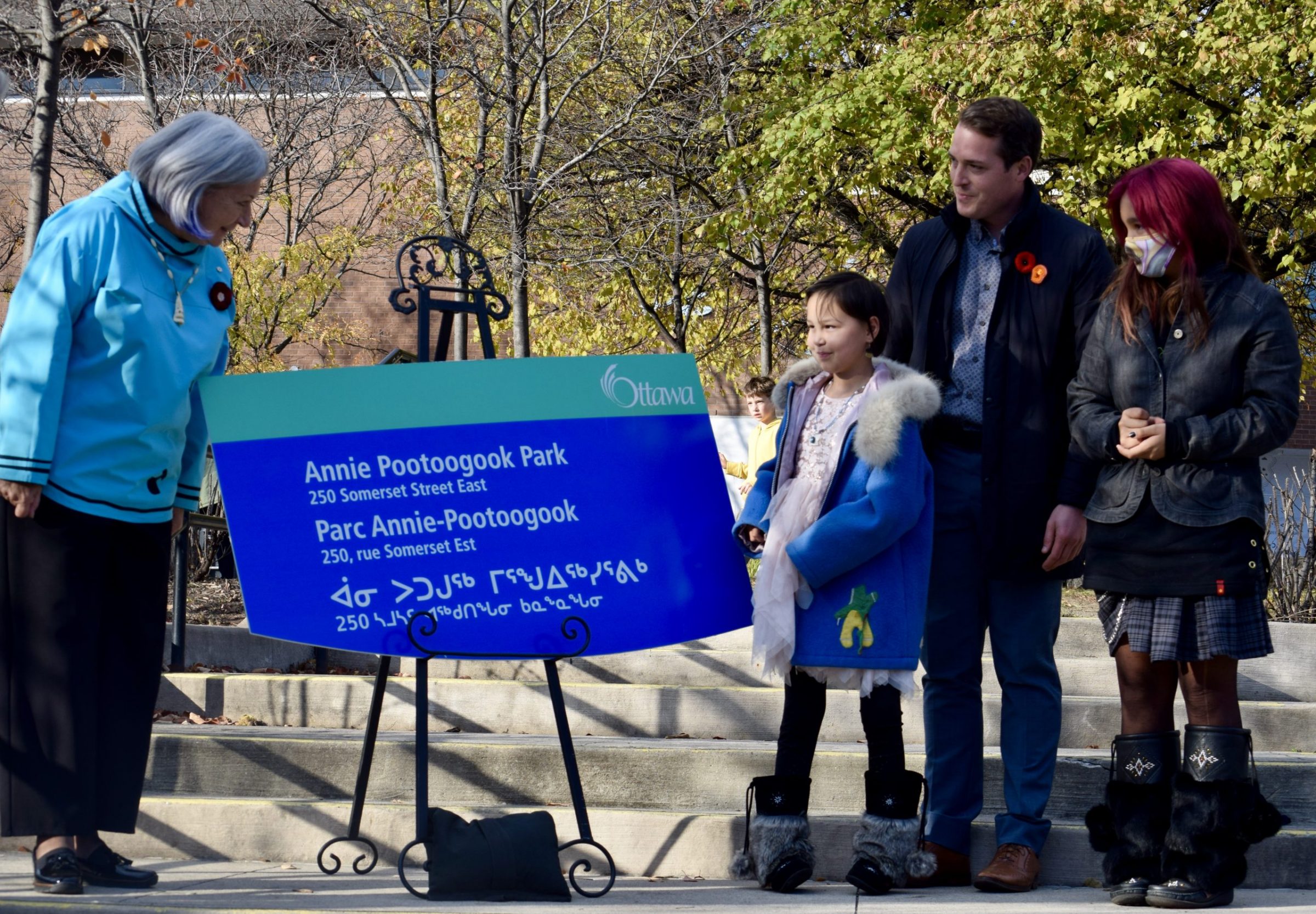 Napachie Coburn, 9, daughter of the late artist Annie Pootoogook, looks up at Gov. Gen. Mary May Simon as they unveil the new sign for Annie Pootoogook Park in Ottawa on Nov. 7. From left: May Simon, Coburn, Ottawa Coun. Mathieu Fleury, and Coburn’s sister Ellie, 12. (Photo by Madalyn Howitt)

Sounds of Inuit singing and drumming rang through the air on Sunday as the sun shone down on the newly named Annie Pootoogook Park in Ottawa.

A crowd of more than 200 people gathered in the city’s Sandy Hill neighbourhood for the official unveiling of the park, named in honour of the famed Inuk artist.

Members of Pootoogook’s family, including her young daughter Napachie Coburn, 9, and other prominent Inuit community members were present at the outdoor event, which coincided with International Inuit Day.

Gov. Gen. Mary May Simon addressed the crowd in a speech that touched on her own connections to Pootoogook’s art.

“As the first Inuk and Indigenous Governor General, I want to draw attention to how Inuit artists, including Annie, depicted our people and how we see ourselves. We are active participants in sharing our culture, our language, and the truth of our history,” she said.

Originally from Kinngait, Pootoogook was known for her pen and coloured pencil drawings of contemporary Inuit life, which often showcased traditions such as hunting and making bannock, alongside more mundane moments, like shopping or watching TV.

“[Pootoogook] presented to Canadians a point of view that is seldom seen, particularly outside of the norm,” May Simon said.

Pootoogook died suddenly in September 2016 at the age of 47. Her body was found on the banks of the Rideau River. Though her death was ruled suspicious, no arrests have been made in the investigation.

“Although Annie died tragically in 2016, she left behind a legacy of Inuit art, of promoting her Inuit heritage, of showing our people who they are, the good and the bad,” May Simon said.

“We turn to our adversity into strength.” 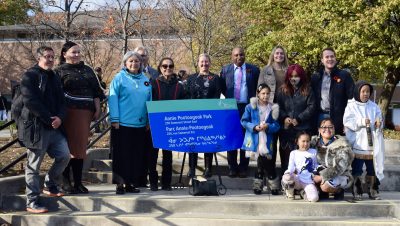 While Pootoogook grappled with mental health issues, addiction and abuse throughout her life, she remained a prolific and acclaimed artist, winning the Sobey Art Award in 2006 among other notable accomplishments.

Jason St-Laurent, the curator of the SAW Gallery in Ottawa, spoke about Pootoogook’s impact on the city’s art scene.

“So many years ago, when we had learned that Annie Pootoogook had moved to Ottawa, we desperately wanted to meet her. She was like art royalty to us,” he said.

Despite being a sought-after artist, St-Laurent remembered Pootoogook’s reluctance to be the centre of attention when the gallery opened an exhibition of her work.

“She showed up an hour before our big opening, because she really didn’t like the spotlight. That’s how humble she was. She is probably blushing watching this right now,” he said.

Taqralik Partridge, director of the Nordic Lab at SAW Gallery, said he’s grateful to Pootoogook for creating a path for younger artists to follow.

“She set a standard that is hard to follow, but also an honour to follow,” she said.

The event was hosted by Ottawa Coun. Mathieu Fleury and featured a recorded speech from Nunavut Premier Joe Savikataaq. A livestream allowed Pootoogook’s family from Kinngait to watch the afternoon’s proceedings, which also included a drumming performance by Sheena Akoomalik and her family and throat singing performed by Annie Aningmiuq and Kendra Tagoona.

Emily Danielle, a first-year student at Nunavut Sivuniksavut, said that naming the park after Pootoogook gives Inuit youth “a sense of visible space” in the city.

“Having a park named after her, a great artist whose life represents Inuit realities, helps us spread our voices as Inuit and how we are situated in this country,” she said. “It’s a great honour to be an Inuk today.”