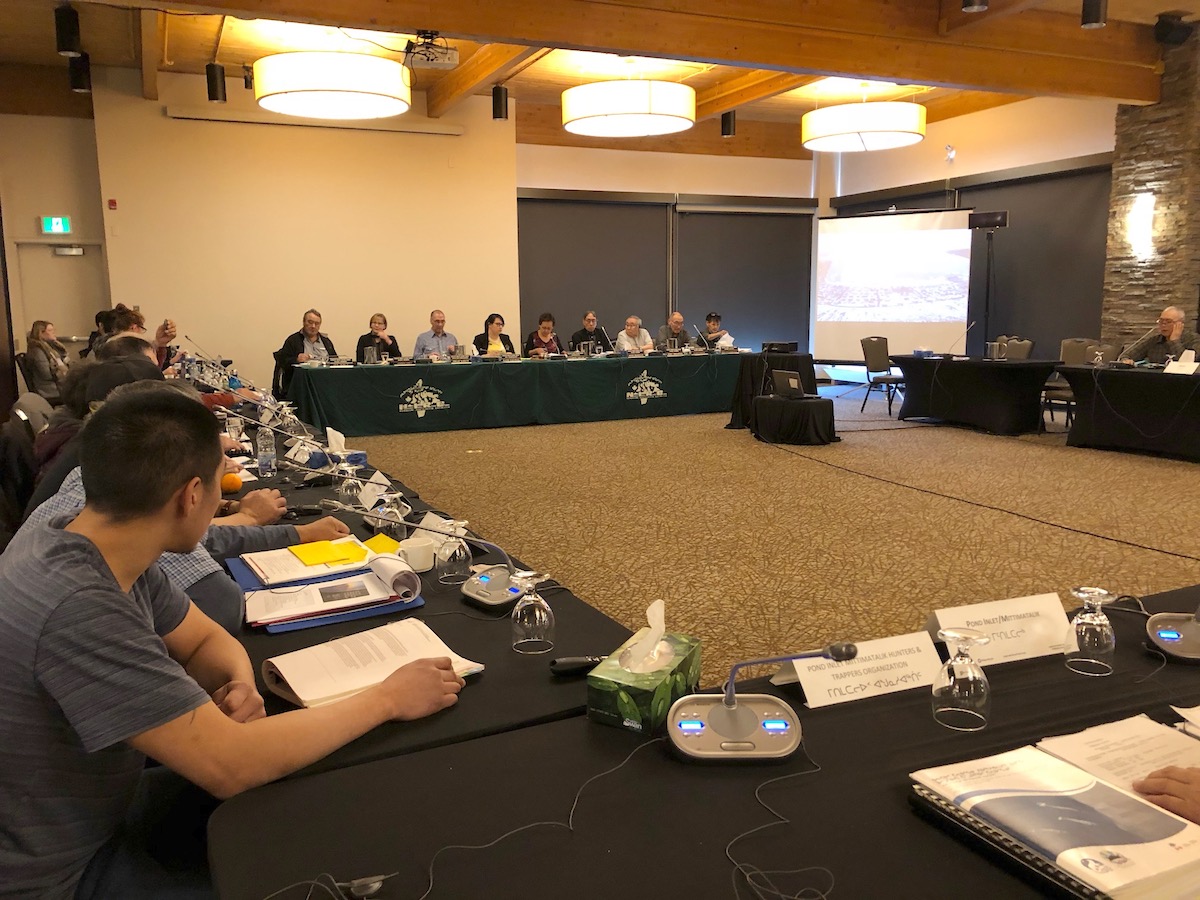 The members of the Nunavut Impact Review Board listen to testimony during a public hearing, held this past March in Iqaluit, on oil and gas development in Baffin Bay. The hearing touched on the need for more spill preparedness, the effect on marine life of seismic testing during exploration, the lack of infrastructure and the unknown impact of climate change. The NIRB now has until the end of July to deliver its report with recommendations to the federal government. (Photo by Jane George)

Ottawa has granted the Nunavut Impact Review Board’s request for a two-month extension on its deadline for delivering its recommendations on potential future oil and gas development in Baffin Bay and Davis Strait.

The NIRB was supposed to deliver its report, called a strategic environmental assessment, or SEA, by May 31, but asked to have that delivery date pushed back to the end of July.

Just 10 days before the expected delivery date, Kaviq Kaluraq, the NIRB’s acting chairperson, wrote to Crown-Indigenous Relations and Northern Affairs to say that regulators needed “additional time to ensure the SEA final report and recommendations are as accurate and comprehensive as possible.”

The delay won’t cost more money, the NIRB said, and it won’t change the general timeline for community meetings planned for the fall of 2019.

An official with Crown-Indigenous Relations said May 31 that the department appreciates the amount of time required to develop a final report and recommendations and granted the delay.

The past March, the NIRB held a week of hearings for the assessment in Iqaluit.

Issues repeatedly mentioned during the public hearing include: the need for more spill preparedness, the effect on marine life of seismic testing during exploration, the lack of infrastructure, and the unknown impacts of future climate change.

All these uncertainties led many to come out in favour of an extended moratorium.

They asked for the five-year moratorium, put into place by Ottawa in 2016, to be extended past 2021 for another 10 years because not enough is known about the potential risks and benefits of oil and gas development in the region.

During the SEA hearing, the NIRB board heard about:

• Whether offshore oil and gas activity should go ahead in Baffin Bay and Davis Strait.

• The location and timing of potential oil and gas activity.

• Options for maximizing benefits for people in Nunavut.

• Specific areas where regulators and others need more information.

• Actions that could prevent or reduce the damage that could be caused by offshore oil and gas activity.

All information relating to the SEA, including transcripts from the final public hearing in Iqaluit in March and materials provided by parties in response to questions raised there, can be accessed from the NIRB’s online public registry.