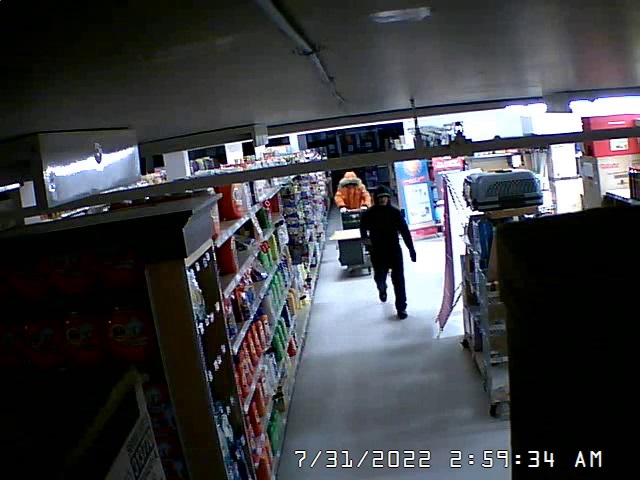 In July, RCMP released security camera images to ask the public for information about the suspects they say broke into the Arctic Ventures store. (Photo courtesy of RCMP)

RCMP have arrested two men in Iqaluit after a rash of break-and-enters in the city over the summer.

A 28-year-old man is charged with four counts of break and enter to a business, along with one charge of failing to comply with court orders, RCMP announced Monday in a news release.

A 25-year-old man faces three charges of break and enter.

The pair are accused of breaking into Arctic Ventures, the NCC Building, CIBC bank, and Hunter’s Market in July and August, according to spokesperson Cpl. Tammy Keller.

In early August, RCMP released security camera footage from the Arctic Ventures break-in, showing two people in large parkas walking through the store with a dolly loaded with boxes.

At the time, police said more than $70,000 worth of gift cards and merchandise was stolen from Arctic Ventures.

Both of the accused are in custody and their next court date is scheduled for Sept. 27.

Correction: This story has been updated to correct the number of break and enter charges the 28-year-old man is facing.