Agreement will ensure managed of artifacts is Inuit-informed, representatives say 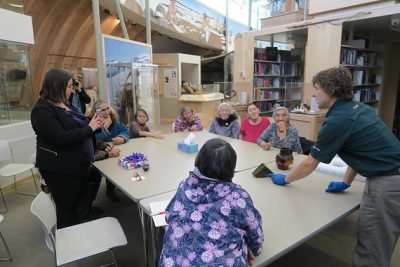 Parks Canada and the Inuit Heritage Trust have signed an agreement on how to care for the Franklin expedition’s new and yet-to-be-discovered artifacts.

In 2018, the United Kingdom gifted Canada the remaining items gathered from the wrecks of the HMS Erebus and HMS Terror, the two ships that took part in Franklin’s 1845 expedition in search of the Northwest Passage.

Both ships were discovered resting on the ocean floor near King William Island, or Qikiqtaq, in western Nunavut, in 2014 and 2016.

While the U.K. kept 65 of the first items found at the wreck sites—including clothing, clothing, plates and the ship’s bell—the 2018 agreement passed all yet-to-be-discovered artifacts to Canada via Parks Canada and the heritage trust, an entity created through the Nunavut Agreement to preserve the territory’s archaeological and ethnographic history.

The agreement will help to ensure that the items, which are currently stored in an Ottawa-area facility, will be managed by Inuit and eventually make it home to Nunavut.

“I’m very pleased that the memorandum of understanding ensures that Inuit Qaujimajatuqangit will be incorporated into our collaboration with Parks Canada on these important artifacts,” said Pamela Gross, president of the Inuit Heritage Trust.

The use of IQ will be upheld in part through the Franklin interim advisory committee, made up of representatives from different Nunavut organizations that advise on the management of the Franklin wrecks, until the time when an Inuit impact and benefit agreement is finalized between Parks Canada and the Kitikmeot Inuit Association.

Parks Canada’s dive mission in 2018 only turned up a small sample of items from the wreck of the MHS Erebus, including some deck rigging from the ships.

These historic artifacts were shared with the communities of Gjoa Haven and Cambridge Bay shortly after they were recovered, before being transferred to Parks Canada’s lab in Ottawa to undergo conservation treatment and study.

A 2018 crew had hoped to search the cabin of Franklin himself for documents and ships’ logs, but those efforts were hampered by heavy ice.

Parks Canada estimated there are thousands of artifacts still to be recovered from both ship wrecks, making it the largest underwater archaeological project in Canada’s history.

“This [agreement] is an important step as we work together with Inuit to ensure that the story of the 1845 Franklin expedition and other stories of the Northwest Passage continue to be told,” said Catherine McKenna, the minister responsible for Parks Canada.

The sites of both ship wrecks are not yet open to the public except with a permit, while Parks Canada and the Franklin advisory committee develop visitor experiences that will allow for the long-protection of both sites.