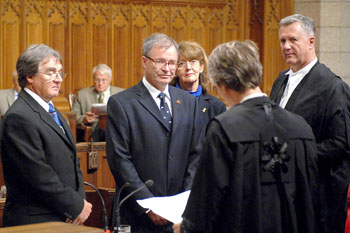 Nunavut Sen. Dennis Patterson, centre, is shown at his 2009 swearing-in ceremony. Patterson quit the Conservative caucus Friday over what he says is inappropriate support for the Freedom Convoy protest that has caused gridlock in Ottawa for a week. (File photo by Steve Ducharme)

He quit the Conservative caucus Friday over some of its members’ support for the controversial protest that has thrown Canada’s capital into gridlock. Who’s next?

By putting it on the line, the 73-year-old senator showed he’s got lots to say before his time in Parliament’s upper chamber runs out in two years.

Patterson, who was appointed to the Senate in 2009 by former prime minister Stephen Harper, announced Friday he was quitting the Conservative caucus over the support some of his colleagues have thrown behind the protest.

For example, fellow Conservative Senator Denise Batters, from Saskatchewan, was photographed in downtown Ottawa alongside former party leader Andrew Scheer and five other elected MPs, posing in front of some of the trucks that have created chaos around Parliament Hill for the past week. Protesters have threatened to drag it out for weeks unless the federal government meets their demands to end all vaccine mandates.

In a four-tweet thread Friday afternoon, Patterson blasted the conduct of some convoy participants for demonstrating hate, intolerance and lawlessness.

“Let me be clear — if you wrap yourself in or go about waving a Nazi or Confederate flag, you are declaring yourself a person who embraces hate, bigotry and racism,” Patterson wrote.

He also blasted the unknown protester who was now-infamously recorded dancing on the Tomb of the Unknown Soldier, people who block public roads and those who are interfering with ordinary citizens’ daily lives.

“Nothing a person like that has to say is anything I’m interested in hearing and nothing I respect,” he wrote.

It’s a stunning break with the Conservative party in an action-packed week that saw members of Parliament turf leader Erin O’Toole. The events of the past seven days reveal a deep divide within the party over how closely it should be aligned with the right wing in Canadian politics or whether it should move to the centre of the political spectrum in a bid to dethrone Justin Trudeau’s Liberals.

As an unelected senator from Nunavut, Patterson’s profile in Ottawa isn’t as high as some Conservative MPs who were cabinet ministers in the past. But he’s a veteran parliamentarian, lifelong politician, and former premier of the Northwest Territories (prior to Nunavut’s creation). He carries some clout — at home in the territory, on Parliament Hill and in Conservative circles.

His abrupt defection from Tory ranks will be noticed on the Hill.

The question his departure raises is — is he alone?

Now that a reasonable, respected Red Tory has signalled he no longer feels comfortable within the Conservative caucus because of the alignment of some members with the extreme right, who else will follow his lead?

Canadians witnessed a spectacular collapse of party solidarity earlier this week when MPs threw O’Toole under the proverbial bus.

Patterson’s exit should set the stage for other disenchanted Tories to follow his lead.