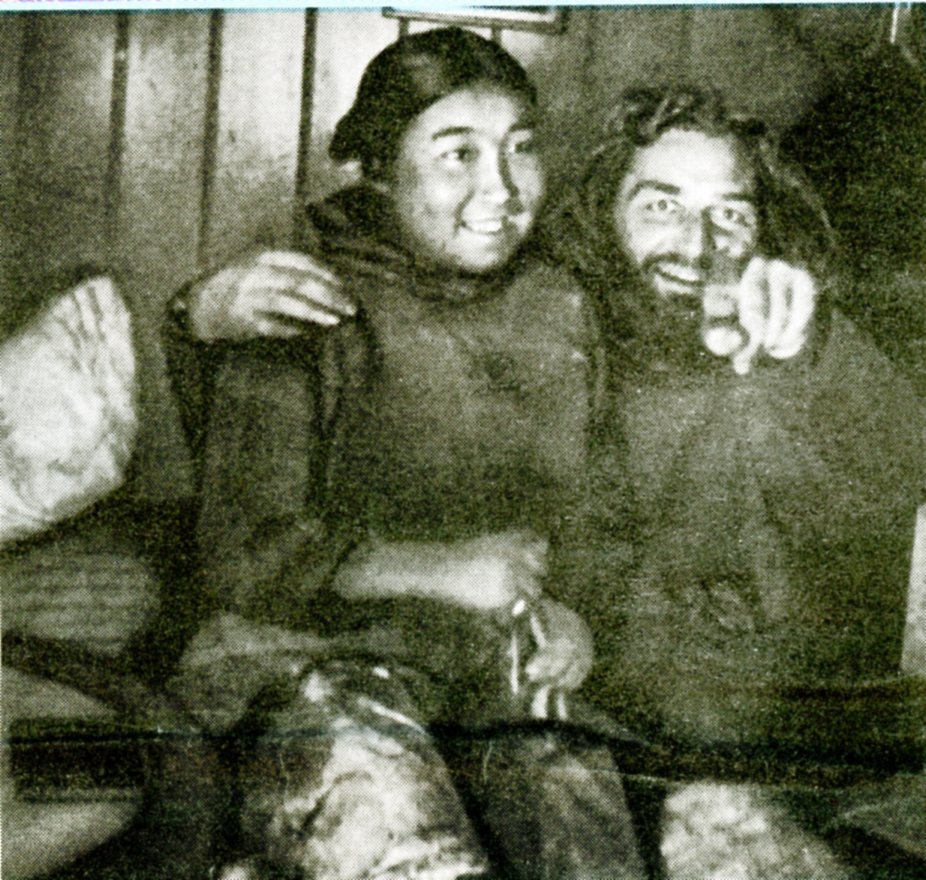 Peter Freuchen and his wife, Navarana, in Thule, some years before the start of the Fifth Thule Expedition. (Photographer unknown. Photo courtesy of Arktisk Institut #506)

Peter Freuchen was a giant of a man.

Standing close to two metres tall, he towered over the other members of the Fifth Thule Expedition and the Inuit of the Melville Peninsula.

The Inuit called him Piitarjuaq — big Peter (Piitarsuaq in Greenlandic).

He was born in Denmark on Feb. 20, 1886. As a young man, he dropped out of university to participate in an expedition to northern Greenland. Once back in Denmark, he was working as a reporter when he met Knud Rasmussen. The two became fast friends.

In 1910, they established the North Star trading post in the heartland of the Inughuit of northern Greenland, where Freuchen became chief trader.

But he was much more than a merchant. Freuchen travelled and explored, adding to the geographical knowledge of northern Greenand.

He collected zoological, botanical and meteorological specimens for museums. But, most important, he learned the language of the local Inughuit and immersed himself in their customs.

A year after his arrival in the district, and intending to make his life there, Freuchen took a young woman, Navarana, as his wife.

In Denmark, this marriage would have at least turned heads if not earned the ire of the local authorities, for Navarana was only 13 years old, while Freuchen was 26. But in Thule, it was seen as normal. Hunters needed wives, and most women married young.

The local missionaries took a dim view of this Inuit custom marriage, but it suited Freuchen just fine. He wrote to a friend, “I am hated by the mission and loved by the Eskimos. What more can I ask for?”

Navarana was to have accompanied the Fifth Thule Expedition — a major scientific and cultural expedition to the Canadian Arctic, started in 1921 — as a seamstress and general assistant, but she died before the expedition left Greenland. Freuchen decided to continue without her.

In later years, he became well-known worldwide as a writer and storyteller, though many have cast doubt on the veracity of his stories.

For nearly all of his stories, though, there was a basis of fact, although Freuchen was certainly not averse to embellishing his tales. Many of his best-known stories were the results of his experiences on the Fifth Thule Expedition.

One of those was of a map-making trip he made with Helge Bangsted and guides Aaqqiuq and Patdloq.

At one point, Freuchen was separated from the group and then became lost when a storm arose. That posed no problem, he thought: he would simply build a snowhouse and wait out the storm.

Unfortunately, snow conditions were not right for building an igloo so here, in his own words, is what he did:

“I began digging in the solid snow and soon I had a depression long enough for me to lie down in. I put my sled on top of this strange bed…

“On my sled I had the skin of a bear’s head I had killed some days before, and I took this along for a pillow. Finally as I crawled into my snug little shelter, I pulled my small sleeping bag in place with my foot, so that it covered the opening like a
door.

“I was well protected against the sub-zero temperature, dressed like an Eskimo in two layers of fur… I had heavy boots and good gloves… Warm and comfortable at last, I soon fell asleep.

“When I finally woke up I was very cold. I knew I had to get out and move about at once. What worried me the most was the fact that my feet did not hurt any more — a sure sign of danger.”

Freuchen was trapped in his little cave.

He had intended to simply push the sled away when he woke, but snow had drifted over it and he was unable to move it.

He rolled over and pushed up on it with his back, but the sled wouldn’t budge. Hoping to dig his way out, he discovered the condensation from his breath had turned the walls of the tiny cavity into ice. He tried scratching with his hands, but
that proved futile.

Desperate, he managed to pull the skin of the bear’s head down from the end of the cave. He chewed on the edge of it until it was saturated with spit, then let it freeze.

He was able to dig a little with the frozen skin, but it softened quickly. Nonetheless, he managed to create a small hole. Then things got worse.

“I pushed with all my strength but the hole was much too small. I got out far enough to expose my face to the drifting snow. My long beard was moist from my breathing and from the spit which had drooled from my bearskin.

“The moment my face got through the hole my beard came in contact with the runners of the sled and instantly froze to them. I was trapped…

“With all my strength I pulled my head back. At first the beard would not come free, but I went on pulling and my whiskers and some of my skin were torn off, and finally I got loose. I withdrew into my hole and stretched out once more.”

After resting for a time, Freuchen had a new idea. He explains:

“I had often seen dogs’ dung in the sled track and had noticed that it would freeze as solid as a rock. Would not the cold have the same effect on human discharge? Repulsive as the thought was, I decided to try the experiment. I moved my bowels and from the excrement I managed to fashion a chisel-like instrument which I left to freeze.

“This time I was patient. I did not want to risk breaking my new tool by using it too soon… At last I decided to try my chisel, and it worked! Very gently and very slowly I worked at the hole. As I dug I could feel the blood trickling down my face from the scars where the beard had been torn away.”

Freuchen managed to work his body into the hole, and to move the sled which had blocked his passage. He was free at last, his life saved by his own excrement.

Taissumani is an occasional column that recalls events of historical interest. Kenn Harper is a historian and writer who lived in the Arctic for more than 50 years. He is the author of “Minik: the New York Eskimo” and “Thou Shalt Do No Murder,” among other books. Feedback? Send your comments and questions to kennharper@hotmail.com.