I Can See You celebrates unique bond between mothers and babies 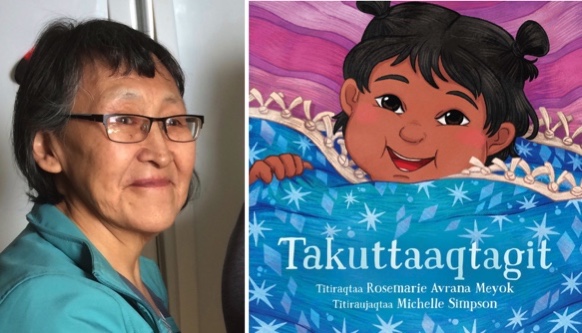 Author Rosemarie Avrana Meyok of Kugluktuk is a longtime language teacher and first-time picture book author. Takuttaaqtagit, or I Can See You, teaches babies and toddlers about the five senses and includes illustrations that highlight Inuit culture and community. (photos courtesy of Inhabit Media)

A new picture book for babies and toddlers is shining a spotlight on the Inuinnaqtun language and western Arctic Inuit culture.

Takuttaaqtagit, or I Can See You, is a brightly coloured children’s book from Kugluktuk author Rosemarie Avrana Meyok and Iqaluit publisher Inhabit Media.

Meyok, 68, is a retired Inuinnaqtun teacher, translator and program specialist. She spent years developing language teaching resources for Nunavut’s Department of Education and researching the most effective ways of teaching languages to beginners, like using physical movement to boost vocabulary retention and pairing elders with cultural and language fluency with beginners to learn through conversation.

So when Inhabit Media approached her with the idea of a picture book for young language learners, Meyok immediately thought of a mother and child learning about the five senses by interacting with each other and their environment.

“The best place I think to learn language and culture is away from the four walls and instead in our environment, where we’re so used to being connected to the earth,” Meyok said. The rich colour palette and unique cultural references in the book are meant to help illustrate that for young readers, she said.

Digitally illustrated by artist Michelle Simpson, the book is filled with images like a narwhal stuffed animal perched on a bed, a mother and baby giving each other a “kunik” nose kiss, and the northern lights dancing in the night sky.

Meyok also wrote down specific details she wanted in the pictures that would represent the western Arctic region she grew up in — Meyok was born at a small Hudson Bay Post on Reid Island, N.W.T.

“I grew up seeing my mother and other ladies packing their babies in the hoods of their beautiful flower parkas … so I had them change the pictures from the eastern style parkas to the western style,” she said.

A page in the English edition of I Can See You, a picture book showing the bond between mothers and children. The book is also available in Inuinnaqtun. Author Rosemarie Avrana Meyok said she wanted specific cultural details in the images, like floral-print parkas that she remembers from her childhood in the western Arctic. (Image courtesy of Inhabit Media)

Meyok gave advanced copies of the book to her young family members who are learning how to read.

“When it arrived just before Christmas I was ecstatic — it’s beautiful,” she said.

The timing is appropriate, as the book is enjoying its official release in the same month that Nunavut is marking an annual language celebration called Uqausirmut Quviasuutiqarniq.

Meyok has a few projects on the go with Inhabit Media, including working on transcribing and translating handwritten stories her father’s cousin would tell her as a child.

She hopes her work in language education, and her latest foray into picture books, will help future teachers promote Inuinnaqtun learning too.

“I’m very glad that our younger teachers and the younger generation are learning a new standardized writing system that best represents the spoken language of our ancestors,” she said.