“Today I am here to say sorry” 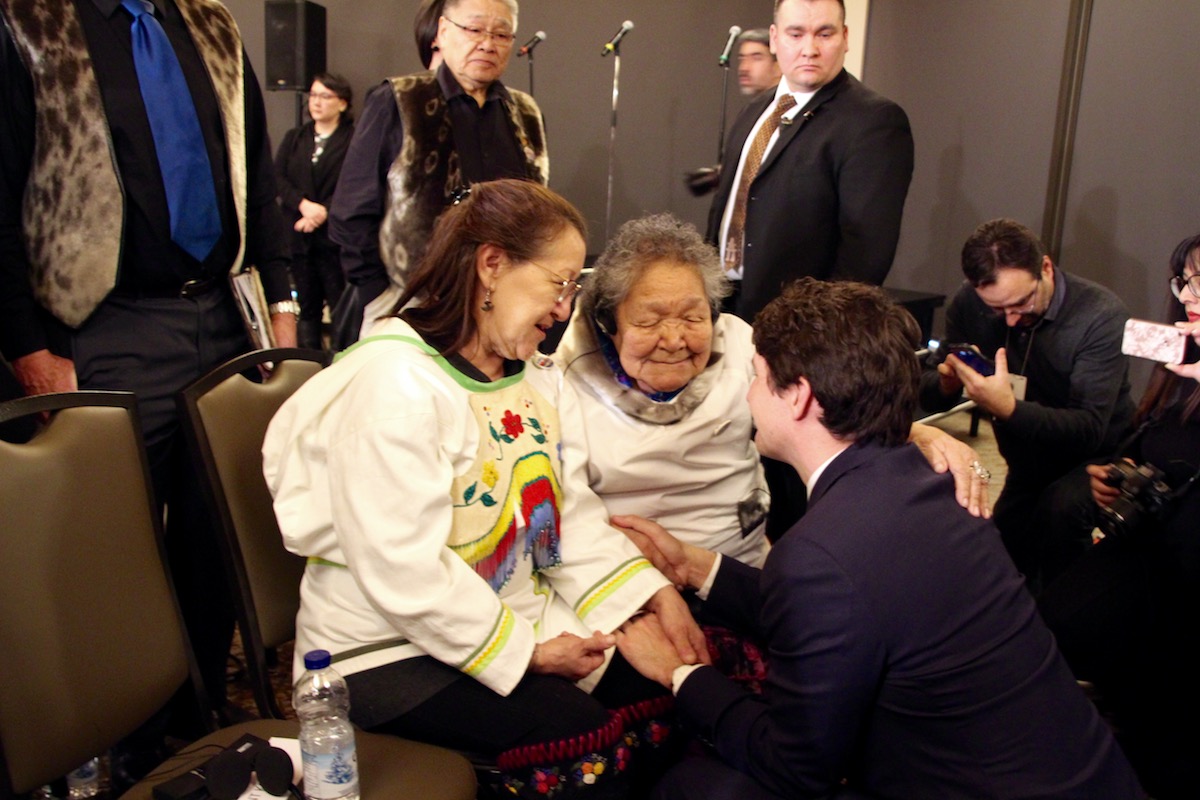 Prime Minister Justin Trudeau speaks with Lizzie Epoo-York of Kuujjuaq and Alacie Joamie of Apex after delivering his government’s apology in Iqaluit today on the mismanagement of the tuberculosis epidemic among Inuit between the 1940s and 1960s. Epoo-York told how she was taken south in her mother’s amautik when she was a baby for TB treatment, while Joamie recounted her husband’s departure to a TB sanatorium in 1967. He never returned, leaving her and her children to a life of hardship. (Photo by Beth Brown)

Inuit in Iqaluit who listened to Prime Minister Justin Trudeau apologize today for the federal government’s mismanagement of the tuberculosis epidemic among Inuit between the 1940s and 1960s responded to him with applause, hugs and tears.

The damage done by the federal government’s program of southern hospitalization for Inuit TB patients was the result of “destructive” and “misguided” colonialism, Trudeau told about 100 or so Inuit from across the four Inuit Nunangat regions. 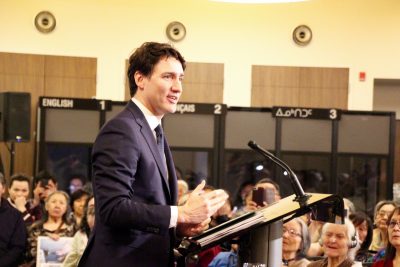 “Today I am here to say sorry,” Prime Minister Justin Trudeau said today before an audience of about 100 Inuit gathered at Iqaluit’s Frobisher Inn, in relation to the federal government’s mismanagement of the tuberculosis epidemic during the 1940s to 1960s. Trudeau also repeated his government’s commitments to help create a database of Inuit who were treated for TB during those years and work to tackle the high rates of TB still found among Inuit. (Photo by Beth Brown)

Trudeau, speaking a day later than planned at Iqaluit’s Frobisher Inn due to a blizzard in the Nunavut capital, condemned the shipping of Inuit to southern TB sanatoriums—from which many never returned.

He called it “a shameful chapter in Canada’s history” and promised to do better in the future, repeating the government’s commitment to eliminate TB across the North by 2030.

Trudeau acknowledged that in the past, Inuit weren’t prepared to leave their homes and didn’t get a chance even to say goodbye. Many children were pulled from their parents and many elders were torn from their homes.

“These were years of isolation, confusion and pain,” Trudeau said.

These wrongs will never fade, he said.

“Today I am here to say sorry.”

Trudeau apologized for the government’s lack of respect and care for Inuit and repeated his apology, saying “we are sorry for your pains.”

He promised a “new approach” with the Nanilavut (let’s find them) program, an Inuit-led project, that, among other things, will create a database of Inuit who went missing or died while undergoing TB treatment in the south.

Beyond providing a bank of information, the money will also help to mark graves, create plaques and support commemorative activities, he said.

“Nothing can bring back the voice of a parent or the embrace of a friend, but acknowledging where they were laid to rest is a start in honouring their memory,” he said.

Helping Inuit travel to where their relatives were treated, and many died, as well as mark graves, “is a start in honouring their memory,” he said.

Trudeau also acknowledged that TB is a disease, affecting Inuit at a rate about 300 times more than non-Indigenous Canadians, “that cannot be cured by medicine alone.”

“Alongside our work to tackle TB directly, we’re investing in the basics, including more than $640 million for housing,” he said, referring to funds previously announced by his government.

The federal government has also committed $27.5 million over five years for tuberculosis treatment across Inuit Nunangat.

The apology ceremony in Iqaluit featured Inuksuk High School singers who started off by singing “O Canada” in Inuktitut and English.

“There was no dry eye in the room” 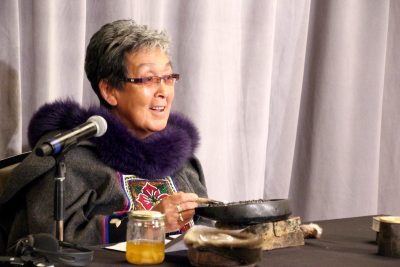 Elisapi Davidee Aningmiuq speaks to those present at the apology ceremony in Iqaluit as she tends a qulliq. (Photo by Beth Brown)

Elisapi Davidee Aningmiuq of Iqaluit, who tended a qulliq throughout the event, ended the proceedings with a Christian hymn, inviting everyone to sing “What a day that will be.”

She said she chose this hymn, which she sung in Inuktitut, as a song of hope, reflecting Kotierk’s final words to everyone present: “let us hope.”

After the apology ceremony, Trudeau mingled with those who had been waiting for more than 24 hours for his arrival.

“It was a long time coming,” the former Nunavut premier, Eva Aariak, said after the ceremony. “There was no dry eye in the room, which really illustrates how important it is to the people of Nunavut and beyond.”

“She came back, but unfortunately her mother or her grandmother never came back. We are still in the process of looking for their graves,” Aariak said.

“This event will bring a lot of closure.”

“The healing process can start now,” Nunavut Premier Joe Savikataaq said. “The apology was thorough and sincere. I’m thankful he could come and do this himself.”

Former MP Jack Anawak, who lost his adoptive mother and his stepmother to TB treatment in the South during the 1950s, said he felt Trudeau’s apology seemed “earnest” and would provide some closure to him.

No new funds or policies 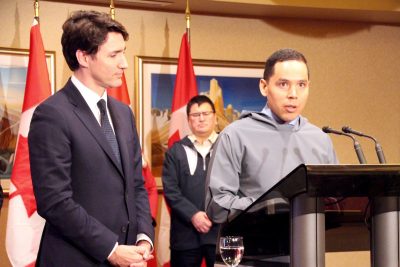 Inuit Tapiriit Kanatami President Natan Obed speaks to journalists at a news conference, where the questions asked by southern journalists focused on events unrelated to the TB apology. (Photo by Beth Brown)

But some Inuit criticized the apology as too little, too late.

Terry Audla said on social media that, while the apology is needed for his father, who with two young children lost his first wife, and for his late grandfather, uncle, and aunts, “this apology without substantive policy change nor current dollars rings hollow. As an Inuk I am still waiting on reconciliation.”

Speaking after the ceremony at a news conference, Trudeau said that Ottawa would continue to invest more in infrastructure and housing for Inuit. But he said that the apology was what the government was committing to today.

At the news conference, questions from southern reporters focused on Trudeau’s political challenges in the south: the resignation of two cabinet members and the SNC-Lavalin scandal.

Inuit Tapiriit Kanatami President Natan Obed, who had called the apology a step to reconciliation during the ceremony, scolded the journalists for their focus.

Obed said that there always seem to be more important stories than Inuit, chiding them to show more respect to the place and the people whose stories need to be told.