“Climate change is so rapid, particularly in the Arctic, that I don’t think an evolutionary remedy is likely for the polar bears” 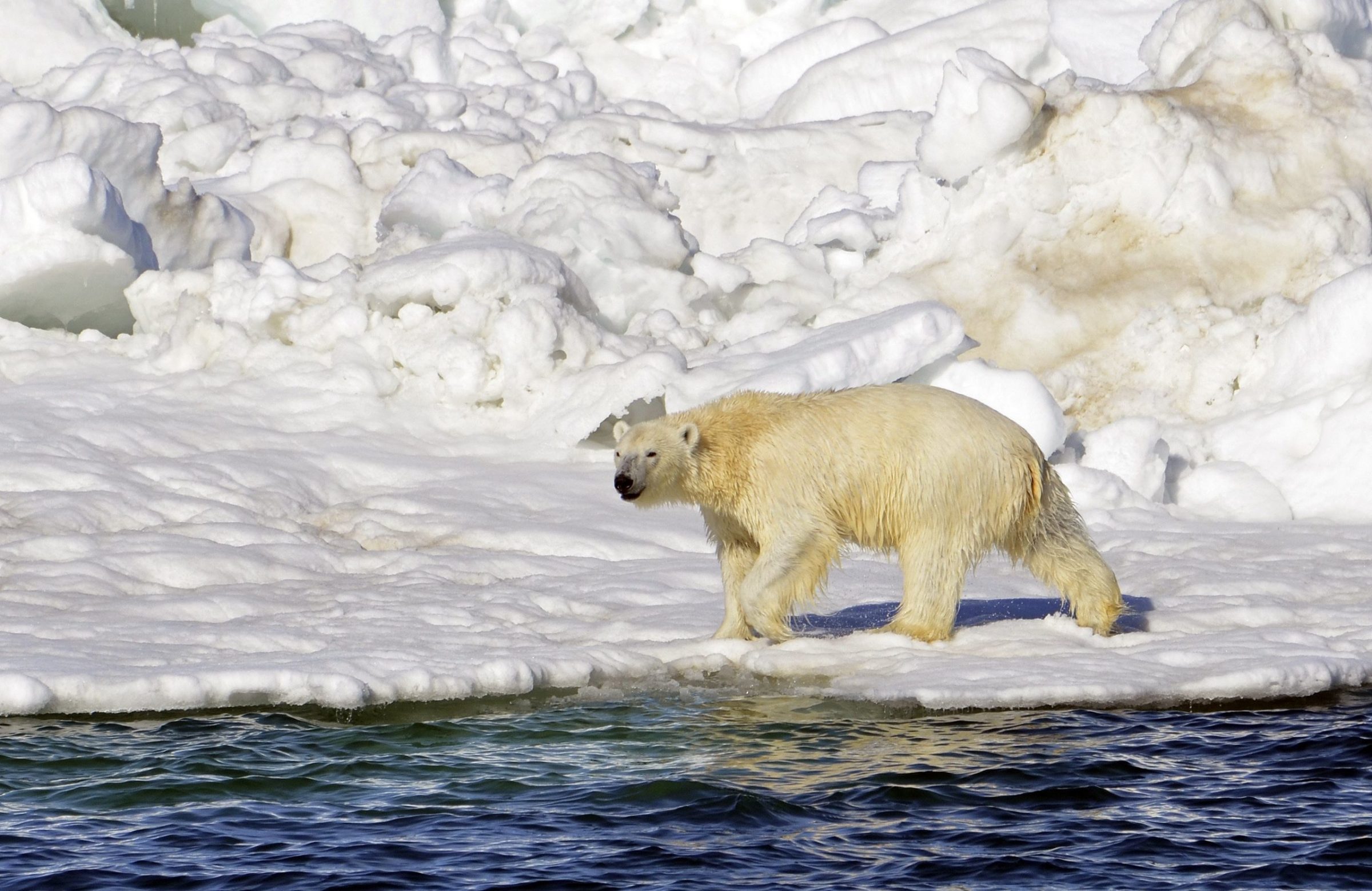 A polar bear dries off after taking a swim in the Chukchi Sea in Alaska, June 15, 2014. (Brian Battaile / U.S. Geological Survey)

When polar bears split into a population distinct from brown bears, they evolved into creatures perfectly adapted for an icy Arctic environment.

Now, the Arctic is warming too rapidly and sea ice is vanishing too quickly for polar bears to simply return to the terrestrial foods that supported their long-ago ancestors, a pair of new studies suggest.

Polar bear teeth and jaws are suited perfectly for soft food — specifically, the blubbery swimming seals that the bears hunt from sea ice — and spectacularly ill-suited for consumption of hard foods that would be found on land, one of the studies concludes. That study, published in the journal Global Change Biology, used specialized techniques to examine the microscopic wear on teeth and the structure of jaws from Alaska polar bear skulls ranging from 1,000 years old to specimens collected in the early 2000s.

The study found no real signs of hard food consumption on polar bear teeth — except for among the small selection of 21st-century bears. It found the structure of the jaws, in the bears’ elongated skulls, did not support this type of hard food chewing. That was the case even for the bear specimens from about 1,000 years ago, known as the “Medieval Warming,” a period with intermittent temperature increases and ice loss.

There are good reasons for the specialization. Polar bears are very large animals that move around a lot in a very cold climate, so they need plenty of energy to sustain their bodies. Fat-packed seals provide that energy; polar bears’ bodies are suited perfectly to hunting at sea. Land-based food like caribou meat or birds tends to be lower in fat and of less caloric value, she said.

“It’s clear that the situation is dire, and it’s clear that terrestrial diets are maladapted for the polar bear,” said Petherick, who was at Vanderbilt University when she worked on the study. 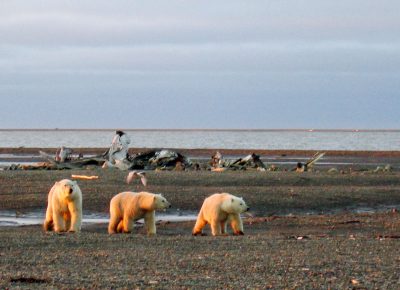 That leaves big questions about the polar bears’ future.

“Can a population adapt or move or go extinct? Those are pretty much what evolutionary options are when you’re faced with climate change,” she said. And she is not optimistic about the first two options. “Climate change is so rapid, particularly in the Arctic, that I don’t think an evolutionary remedy is likely for the polar bears.”

In all, researcher examined 49 modern specimens and 20 archeological ones, with most coming from the University of Alaska Museum of the North.

Some polar bears today are managing to eat food they get off the land. One notable case is on Alaska’s North Slope, where bears gather at bone piles left on the beach after Inupiat whalers butcher their harvests. Those scraps have become a significant part of the diet of some bears in the vulnerable Southern Beaufort Sea population.

But those scraps tend to be mostly bone, with little remaining fat — and the hard bone is not easily crunched by polar bear jaws and teeth, Petherick said.

Even the one type of terrestrial food that does carry significant fat content — eggs of tundra-nesting birds — is unlikely to do much to support hungry polar bears, a different study found.

That study, which examined polar bear behavior in Nunavut, found that bears that have taken to raiding birds’ nests for food are not very good at that type of food foraging. The study is published in the journal Royal Society Open Science.

The project used drones to monitor bear activity around duck nests on Nunavut’s Mitivik Island. As the egg supply dwindled, the scientists found, the bears expended more energy trying to find more — and were unable to distinguish between egg-holding and empty nests. In all, it was an inefficient way for polar bears to get food, the study concluded.

The common conclusion of both new studies — that terrestrial food will not make up for losses in polar bears’ traditional marine diet of fatty seals — back up conclusions of earlier U.S. Geological Survey-led research that concluded that land offers little to meet polar bears’ nutritional needs.

That 2015 USGS-led study found that only a few bears ate even moderate quantities of land-based foods.

“We didn’t find any evidence anywhere that terrestrial foods could benefit any more than a few individuals out of a population,” said Steve Amstrup, a former USGS biologist and the chief scientist with Polar Bears International, who was a co-author of that study.

Especially detrimental to polar bears on land is their attraction garbage left by people. Trash foraging can put dangerous substances into polar bears’ bodies. A North Slope Borough study of 51 polar bears harvested between 1996 and 2018 bears found a lot of non-food substances in their stomachs, raising concerns about gastric blockages. Thirteen of the bears had plastic in their stomachs, mostly plastic bags, according to the findings, which were presented in a poster at the 2019 Alaska Marine Science Symposium in Anchorage. Two of the bears that turned out to have large amounts of ingested plastic had been acting aggressively and not responding to hazing before they were killed, the study found. 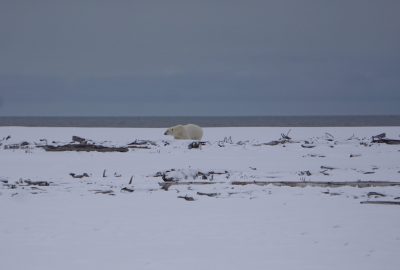 Beyond problems for bears, the turn to terrestrial foods poses risks for animals and people on land.

Polar bear raids of bird nests, no matter how inefficient, could be devastating for bird colonies, scientists warn. Specifically, they have raised alarms about bird populations in Arctic Canada — where one study found that bear incursions into nesting sites had increased seven-fold since the 1980s — as well as in Greenland and Svalbard.

The trash-foraging behavior sets up potential human-bear encounters. In one notorious 2019 case, more than 50 polar bears rampaged through a Siberian town, going beyond trash dumps to enter buildings.

Land in the Arctic does offer sufficient food to feed a different type of bear, the grizzly, but only to a limited degree. That is not a good sign for hungry polar bears, Amstrup said.

The grizzlies that live on the Arctic tundra have the smallest bodies of all grizzly populations, and they are few in number, he said. “That land won’t support many bears,” he said. It certainly would not support an incursion of hungry polar bears moving in from the sea, he said. “There isn’t any reason why you would expect a whole population of the largest bears of the world to move into an area that doesn’t support many bears.”

Additionally, as shown by the study on polar bears’ teeth and jaw, the Arctic grizzlies have skulls that are much more suited to the consumption of hard-textured foods.

There is recurring speculation that grizzly-polar hybridization could be a response to climate change, and the subject gets a mention in the new paper examining teeth and jaws. Polar bears and grizzlies have mated in the past; the evolution of polar bears into highly specialized Arctic ice-dependent, seal-hunting, swimming animals has been interrupted over the past hundreds of thousands of years by cross-breeding. That complicates estimates of timelines for polar bear evolution, which range from 150,000 years ago to millions of years ago.

Some cross-breeding is happening In modern times. A few polar-grizzly hybrids — sometimes known as “pizzlies” — have been spotted in Canada. But it is not much of a solution to the polar bears’ problems, Amstrup said.

“Hybridization is not going to save polar bears. So what if we have a future brown bear 100 years from now that’s carrying some polar bear genes?” he said.

Hybridization or not, unless humans change their ways, time is running out for polar bears, he said. “Polar bears are likely to starve out before they’re bred out,” he said. 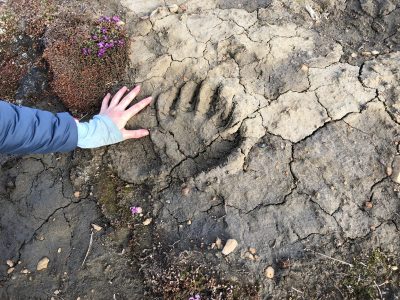 A polar bear track is seen in the Canning River delta on the boundary of Alaska’s Arctic National Wildlife Refuge. (Shiloh Schulte / USFWS)