“We depend entirely on healthy wildlife to provide our food” 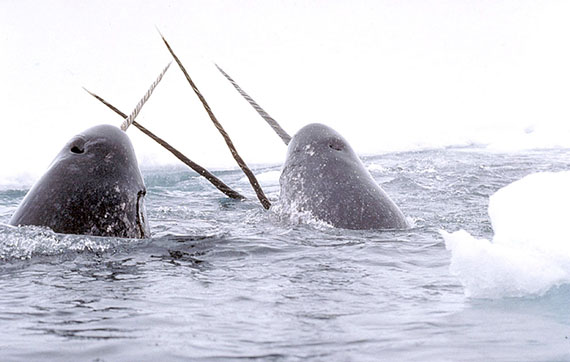 Hunters in Arctic Bay and Pond Inlet say offshore oil and gas development in Nunavut waters would affect food security by damaging the marine ecosystem. They want overwintering areas used by narwhals, seen above, to be protected from underwater testing and drilling. (PHOTO COURTESY OF WIKIMEDIA COMMONS)

Two groups of Nunavut hunters say they won’t support preliminary studies into oil and gas development unless more “meaningful” consultation is had with their Inuit communities about the impact offshore drilling could have on marine life.

“Our HTO has serious concerns about the impact of oil and gas activities on marine mammals and we don’t believe that this is reflected in the preliminary findings report,” Joshua Kango, chairperson for the Ikajutit HTO, said in reference to a joint report on oil and gas extraction released last fall by the NIRB and the Qikiqtani Inuit Association.

“We have expressed our views to the NIRB and QIA at the community consultations, but the report suggests that the NIRB has not heard our concerns and is not supporting our community,” the HTO said.

Kango’s letter is just one in a string of public submissions made to the NIRB last week, in the lead-up to a technical hearing for a strategic environmental assessment of oil and gas development off the east coast of Baffin—in Baffin Bay and the Davis Strait—that the review board has worked on since February 2017.

That technical hearing will take place in Iqaluit this month, on March 18–22.

The Ikajutit HTO and Mittimatalik HTA will both be present at the hearing, along with the Nangmautaq HTO from Clyde River.

The Pond Inlet group will make a presentation about Inuit knowledge of marine food webs in Baffin Bay, and the importance of invertebrates like krill, Mittimatalik HTA chair Eric Ootoovak wrote. He said drilling will affect the food supply of larger animals used by Inuit as food.

“The sea floor is a very sensitive environment where animals live as juveniles and then come to the surface as adults,” he said.

While oil and gas development is sold as a way to boost the economy and jobs in the North, Ootoovak warned that the work could also damage fishing stock.

“If fisheries are negatively impacted from the oil and gas development, the HTOs and communities will lose income,” he wrote.

Both groups cautioned the NIRB about damage to marine mammals from underwater noise.

“Narwhal can hear small noises from miles away and we have noticed changes to narwhal behavior from the Baffinland shipping activity which is already creating a lot of underwater noise and impacting some animals,” Ootoovak said. “We are concerned that seismic testing and oil and gas activities will add more noise to our marine environment and have a negative impact.”

Narwhal overwintering areas near Pond Inlet and Arctic Bay, like Alexandra Fiord and Pikialasorsiaq, should be off limits to oil and gas work, he said.

“We depend entirely on healthy wildlife to provide our food,” the Arctic Bay HTO wrote. The HTOs want more information on what the response would be to an oil spill, saying that the risks to Inuit food security in the wake of an oil spill would be too much.

Kango said the notice given for a fall 2018 round of NIRB consultations was “last minute” and that his community wasn’t given the resources to make “meaningful comments” on a first report by the NIRB. “The preliminary findings report is over 100 pages and was released publicly on September 26, 2018,” he said. Consultations were held shortly after, in October, and the HTO didn’t have the capacity to review the NIRB technical documents fully, he said.

That early NIRB report also implies, the HTO said, that sounds of seismic testing are similar to the noise levels, in decibels, created on the water’s surface by “the cracking and break-up of sea ice.”

“We believe this is biased and misleading,” Kango wrote.

In January, the Clyde River Hunters and Trappers Association sent a letter to the NIRB to say that this ban should go on for another five years, to 2026 instead of 2021. Clyde River called for community plebiscites and said neither the NIRB nor the federal government were giving Inuit enough information about project impacts and timelines.

The NIRB said the goal of the hearings is to provide background information, describe challenges and scenarios surrounding oil and gas development, assess impacts and identify gaps in knowledge and data.

The technical hearings will lead to a final report and recommendations.

Beside the HTOs, the technical hearings will see presentations by the following: