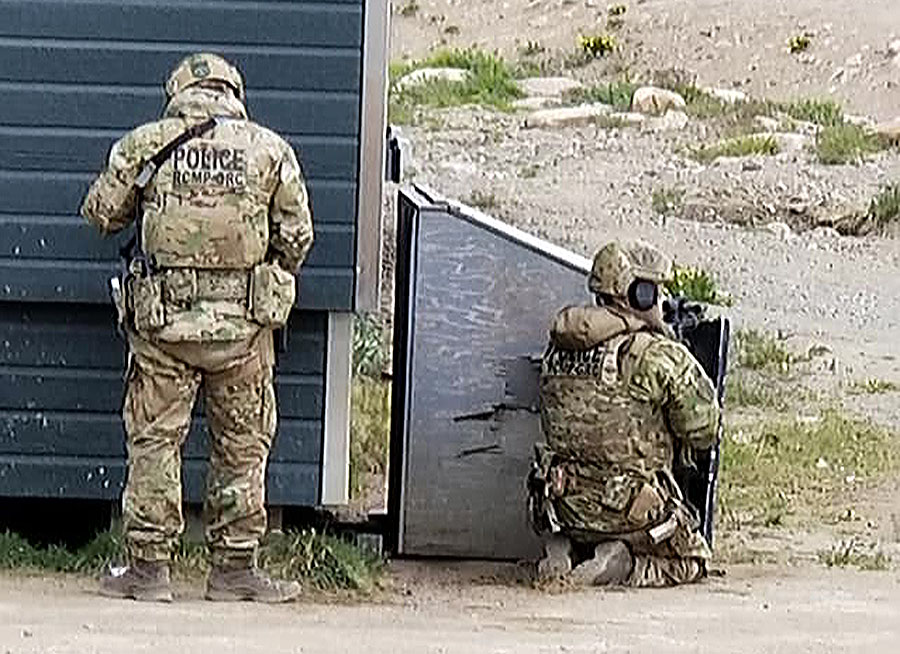 Iqaluit RCMP are seen here on June 30, 2019, prior to Wayne Panipakoocho’s arrest in the killing of another man in Iqaluit. (Photo courtesy of Joe Hess)

A Nunavut judge sentenced Wayne Panipakoocho to nine years for killing Hannas Braun in Iqaluit in the summer of 2019.

Justice Susan Charlesworth broke down the total of 111 months in jail Thursday morning in an Iqaluit courtroom — he faces 108 months for manslaughter and three months for breaking and entering.

Each day of pre-trial custody counts as 1.5 days, and taking into account outstanding jail time for a previous assault, Charlesworth said Panipakoocho has approximately four and a half years left to serve.

Panipakoocho was originally charged with first-degree murder, but Charlesworth found him guilty of manslaughter following a trial in October.

“The loss of Mr. Braun’s family is forever, and it was solely caused by Mr. Panipakoocho,” Charlesworth said in an Iqaluit courtroom Thursday morning.

Panipakoocho shot Braun in both legs with one bullet at close range with a 270 caliber Ruger rifle — which he had stolen from a shack — inside of his aunt’s apartment in the 2600s area of Iqaluit at around 7:25 a.m. on June 30, 2019.

Braun bled out shortly after and police arrested Panipakoocho around noon that same day.

Panipakoocho has been in custody since then.

Ten days prior to the shooting, Panipakoocho had arrived in Iqaluit from Pond Inlet on a custody sentence for an assault charge where he repeatedly kicked a victim in the head and had a probation order dating back to a previous offence not to drink alcohol or get into legal trouble.

“He obviously made little if any attempt to follow either of those orders that were in effect,” Charlesworth said.

The Crown had argued Panipakoocho should be sentenced to 11 to 13 years in jail, because any reasonable person would understand that firing a powerful gun at close range has the potential to kill somebody, Charlesworth said.

Whereas the defence had argued for six years in jail because Panipakoocho had shown remorse after he learned Braun died, and offered to plead guilty to manslaughter “which would have avoided the trial,” Charlesworth said.

Charlesworth said her decision takes into account aggravating factors, such as the crime being committed with the use of a firearm while he was on probation.

She also received letters from Braun’s family members, some of whom were in attendance in the Iqaluit courtroom, which depicted Braun as “a huge support” to his family and friends.

Charlesworth spoke specifically of a picture drawn by Braun’s daughter of her and her dad at a playground.

As for mitigating factors, Charlesworth said her decision also takes into account his upbringing and the progress that Panipakoocho has made so far.

During his time at the Ontario jail, he joined Bible study classes and “Aboriginal programs,” Charlesworth said, adding that he had good attendance and treated staff well.

“This was a very difficult case and I hope that you continue the work that you’ve been doing,” she said.