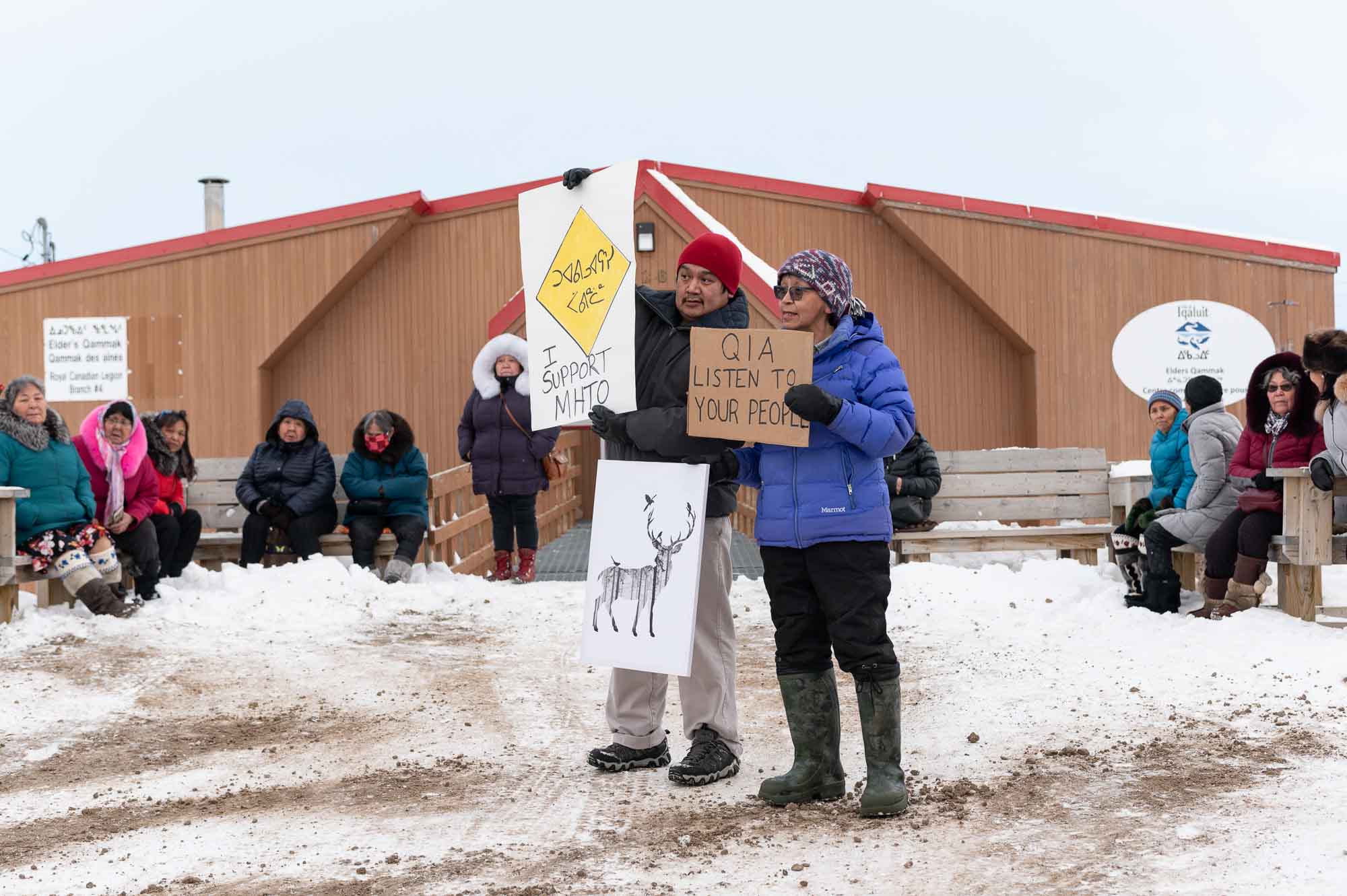 Abraham Kublu (left) a former Pond Inlet hamlet councillor and current Iqaluit resident, was joined by roughly 30 others to stage a protest in support of the hunters involved in a blockade of Baffinland’s Mary River mine on Monday. The protesters announced they are decamping from the site overnight Feb. 10. (File photo by Dustin Patar)

The mayor of Pond Inlet is calling on two Inuit organizations to help address the concerns of protesters who have blockaded the airstrip and road at Baffinland’s Mary River iron mine.

In a letter sent Wednesday to the Qikiqtani Inuit Association, Nunavut Tunngavik Inc. and Nunavut Premier Joe Savikataaq, among others, Pond Inlet Mayor Joshua Arreak called for a meeting of all parties to discuss the blockade, which was in its seventh day on Wednesday.

“I am asking for a meeting to be held as soon as possible to allow protesters to stand down, knowing that their concerns and issues will be heard by those who are responsible for addressing them,” Arreak wrote.

The protests are against Baffinland’s proposed mine expansion, which would see an additional six million tonnes of iron being shipped through the Tallurutiup marine conservation area, and the construction of a 110-kilometre railway that Inuit say will have extensive impacts on their culture and environment. Baffinland says it needs to expand the Mary River mine to make it financially viable.

Arreak proposed that QIA and NTI acknowledge concerns raised by the hamlet and hunters and to commit to finding better ways of sharing royalties and other economic and social benefits provided from Baffinland’s activities.

“We are not satisfied with the benefits we are currently receiving,” Arreak wrote. “Agreement with what is proposed will immediately be communicated to the protesters.”

The letter came after a judge in Iqaluit ordered on Wednesday the protesters to end their blockade of the airstrip and allow mine employees to leave.

“The order is to facilitate the transportation of the employees who are currently on the site so that they can leave and go home,” said judge Susan Cooper.

The company has said there are more than 700 employees at the mine site and the blockades are preventing supplies from coming in and employees from leaving.

The mine expansion has yet to be approved, and the Nunavut Impact Review Board’s hearing on the matter is set to resume sometime in March in Iqaluit.

With files from Dustin Patar