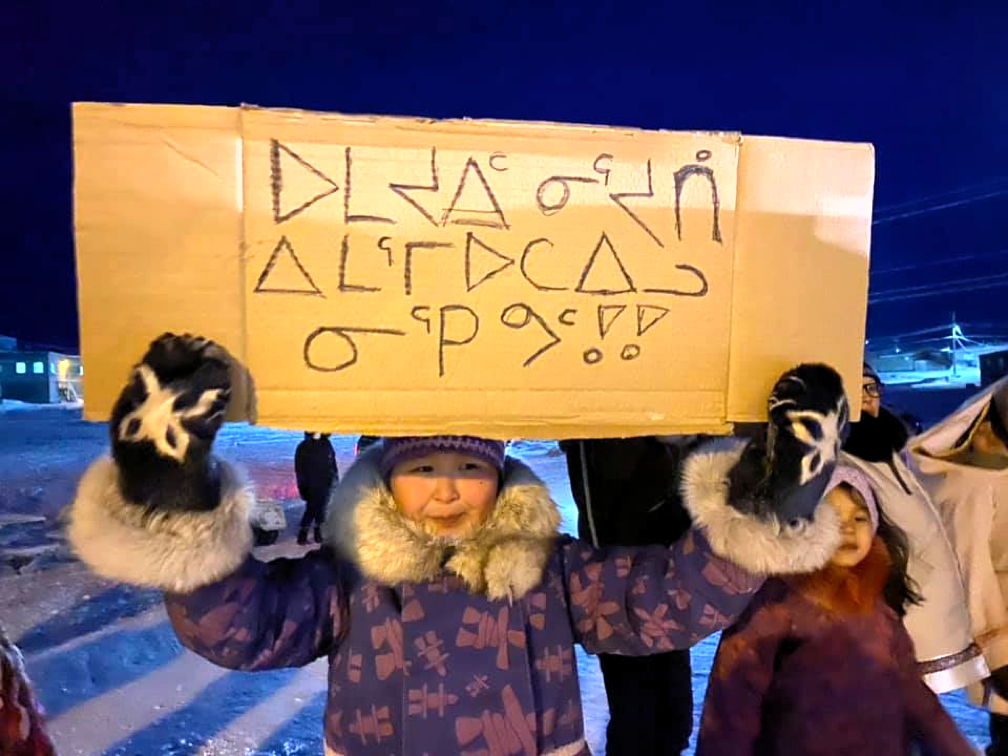 About 25 women and children protested in front of the Pond Inlet community hall last night, where the Nunavut Impact Review Board’s hearing into Baffinland’s expansion proposal have been held for the past two weeks. (Photo courtesy of Shelly Funston Elverum/Facebook)

A group of about 25 Pond Inlet women and children demonstrated in front of the Pond Inlet community hall Friday night in support of a small group of Pond Inlet and Arctic Bay hunters who have been blockading the Mary River airstrip and road since Thursday night.

Baffinland Iron Mines Corp.’s Mary River mine isn’t delivering what the company promised and it hurts women and children, said Pond Inlet resident Shelly Funston Elverum, one of the demonstrators.

The Pond Inlet community hall is where the Nunavut Impact Review Board has been conducting a public hearing for the past two weeks into Baffinland’s controversial proposal to expand its iron mine, a step the company says it needs to take to make the mine financial sustainable.

“The protest was held in front of the community hall where the meetings were taking place, so that NIRB, [Baffinland] and the regulators would come face to face with the women and children that are impacted by this project,” Funston Elverum told Nunatsiaq News.

For the past four years Baffinland has been using a truck route to haul ore from the mine. The expansion would see the construction of 110-kilometre railway, a new ship-loading facility at Milne Inlet, and 176 transits by ore-carrying vessels taking up to 12 million tonnes of iron ore per year from the mine.

But despite the potential for more Inuit jobs, benefits and royalties for the Qikiqtani Inuit Association, the project faces strong opposition from people in Pond Inlet and some other North Baffin communities.

“This protest shows that many mothers and children fundamentally disagree with Baffinland’s statements of impacts and significance, by being willing to stand in solidarity with the hunters blockading the Mary River mine and protest at -38 temperatures,” Funston Elverum said.

Funston Elverum said another protest was to have been held at noon Saturday, again in front of the community hall where the NIRB hearing continues today with presentations by intervenors.

The hunters who are camped out at the Mary River site have questioned the legitimacy of the Qikiqtani Inuit Association, the NIRB and even the Hamlet of Pond Inlet.

One of the hunters said in a satellite phone call recorded in a video posted publicly on Vimeo that he and his group are protesting their treatment by the Qikiqtani Inuit Association, saying QIA is not listening to them.

“It is due to the QIA’s actions on the Mary River Phase 2 project that we are protesting at Mary River. QIA has treated us haphazardly…” said the man, who is not identified in the video.

QIA, the legally recognized Inuit organization for the Baffin region, owns most of the land the project sits on and has negotiated commercial land-lease and royalty agreements, as well as an additional deal called the Inuit Certainty Agreement.

On Friday, Jack Anawak, a former Liberal MP for Nunavut and an NDP candidate in the 2015 federal election, said he supports the protest “from the sidelines.”

“I think the Inuit of Nunavut are on a verge of great change thanks to the great wisdom and determination of the people of Mittimatalik,” Anawak said in a Facebook post.

Meanwhile, David Akeeagok, Nunauvt’s minister of Economic Development and Transportation, said in a message on Facebook that he acknowledges the protest at Mary River.

But he urged people to respect the environmental assessment process set out in the Nunavut Land Claims Agreement and to use the opportunities that the NIRB provides Numavummiut to ensure that their voices are heard.

“Emotions are high, but we must continue to work together with respect for one another to complete the Nunavut Impact Review Board’s hearing process,” Akeeagok said.

“I firmly believe in the NIRB process as set out under the NLCA,” Akeeagok said.