Power shift: How northerners are pushing their own agendas 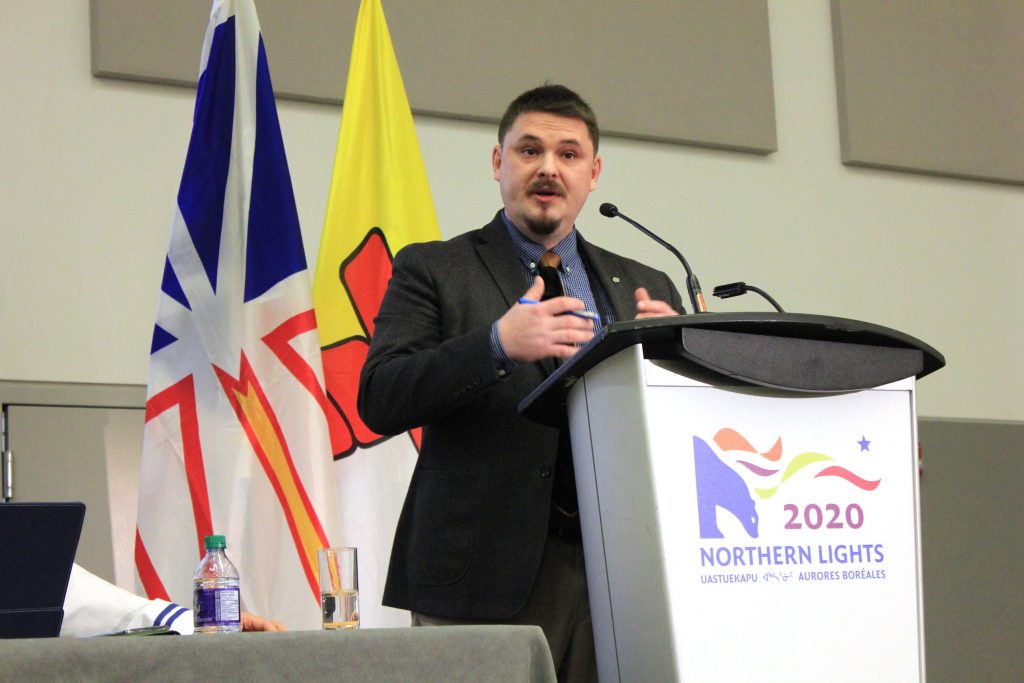 P.J. Akeeagok, president of the Qikiqtani Inuit Association, shares his blueprint for community-led development during a panel discussion at the Northern Lights conference in Ottawa on Feb. 5. (Photo by Lisa Gregoire)

Nunavut jobs, and the benefits they bring to individuals and families, don’t have to come from driving ore trucks or sitting behind a government desk. They can come from the new “conservation economy.”

P.J. Akeeagok, president of the Qikiqtani Inuit Association, told delegates at the Northern Lights conference in Ottawa on Feb. 5 that Inuit visionaries from the 1950s and 60s—John Amagoalik, Larry Audlaluk and the late Sam Omik, for example—foresaw the role Inuit could play in protecting the Arctic land and now Inuit are making a living doing just that.

Akeeagok was speaking about Inuit in Grise Fiord, Resolute Bay, Arctic Bay, Clyde River and Pond Inlet who stand to benefit from jobs and investment now flowing from agreements covering the Tallurutiup Imanga National Marine Conservation Area in Lancaster Sound and the Tuvaijuittuq Marine Protected Area, west of Ellesmere Island, which awaits a feasibility study on how it will be preserved and the role Inuit will play protecting it.

He said he was honoured to share how they developed “a blueprint, really, of what a true conservation economy could look like. It was Inuit driven and Inuit led.”

Akeeagok was part of a panel discussion on community-led innovation in northern economic development.

The QIA successfully negotiated $54.8 million over seven years to pay for a number of initiatives including new co-governance models—which include Inuit community members—fisheries development, Inuit-led research, training, monitoring, scholarships, and capacity-building and support for local hunters and trappers organizations.

It will also go toward one of the benefit agreement’s signature programs, the Nauttiqsuqtiit Inuit Steward program.

The stewards will act as eyes and ears on the land and water, monitoring and conducting research and data management, acting as cultural liaisons and interpreters, harvesting for their communities, mentoring youth and helping with search and rescue efforts.

“The Nauttiqsuqtiit, the stewards … they are the local heroes, really,” Akeeagok said.
“When I was growing up, that would have been my dream job. Coming from Grise Fiord, when there’s such a lack of opportunities, to be able to create something so meaningful to Inuit in these communities is something we’re very proud of.”

Ottawa has also promised $190 million in infrastructure investment, including country food processing units in each of the five communities, new harbours in Grise Fiord and Resolute Bay, small-craft harbours in Arctic Bay and Clyde River and a regional training centre in Pond Inlet—partially funded by the Canadian Northern Economic Development Agency and $10 million negotiated in a Mary River benefits deal with Baffinland.

“The agreement is really ground-breaking,” Akeeagok said, “unprecedented in terms of what true partnerships could look like, when you have the federal government as well as the Inuit come to the tables as true equals.”

Neil O’Rourke, assistant commissioner for the Canadian Coast Guard’s Arctic region, was also part of the conference panel. He offered a government perspective on community-led development.

In 2018, Ottawa announced that Fisheries and Oceans Canada, which includes the Canadian Coast Guard, would create a new Arctic region to encompass areas previously contained in the Central Arctic region, Newfoundland and Labrador, and Quebec. The new region will include all of Inuit Nunangat, although the exact boundary is still being finalized.

After extensive consultations throughout the North last summer, led by O’Rourke and DFO Arctic regional director general Gabriel Nirlungayuk, the department has developed a vision of what the new Arctic region will be. One thing seems clear, O’Rourke said. It won’t be run the way it used to be, from southern Canada.

“Decision-making needs to happen in the North,” he said, “not from people who are thousands of kilometres away, who may have, in some cases, never even set foot in the Canadian Arctic.”

The department also plans to spend money on service improvements and infrastructure. “We heard over and over again, there needs to be more invested in environmental response capabilities and search and rescue capabilities,” he said, “and more investments in small-craft harbours.”

And what’s to come? Well, jobs for one. As more program delivery moves north, there will be more job opportunities for northerners. O’Rourke said CCG is currently hiring for ship-bound positions as well as other opportunities.

The Northern Lights conference wrapped up in Ottawa on Feb. 8. The conference’s next visit to Ottawa is expected to occur in 2022.