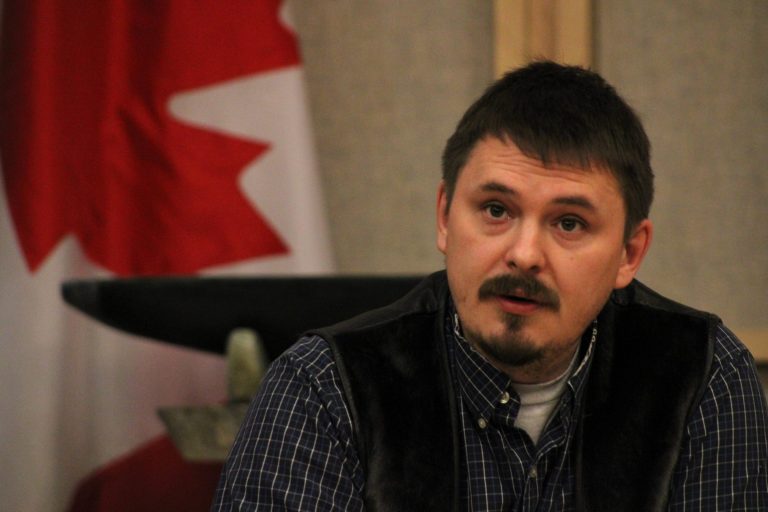 Nunavut Premier P.J. Akeeagok began his first statement of the legislature’s winter sitting by addressing Russia’s invasion of Ukraine and its potential implications to the Arctic.

“Nunavut stands with the people of Ukraine and Ukrainians around the world,” Akeeagok said Monday afternoon.

In showing that support, he announced the territorial government will commit $25,000 of humanitarian aid to the Red Cross to assist Ukraine.

Beyond donations, the premier has been active in voicing his concern for Arctic security as Russia, an Arctic neighbour, becomes more hostile on the global stage.

On Feb. 24, Russia launched a full-scale invasion of Ukraine, with several of its cities being bombed, including the capital, Kyiv. Ukrainian civilians are struggling to evacuate the country because of constant shelling from the Russian military.

But Russia’s presence is in Nunavut itself, as Nordgold S.E. is a Russian-owned gold mining company that is doing exploration work near Whale Cove.

While the federal government has imposed economic sanctions on Russia and Russian businesses, Akeeagok told Nunatsiaq News the territory will not be making an immediate response to Nordgold’s operation in Nunavut, but that “nothing’s off the table.”

Akeeagok is also one of the three territorial premiers who signed a letter to Prime Minister Justin Trudeau, asking for a discussion on Canada’s Arctic security and sovereignty in the wake of Russia’s invasion of Ukraine.

He said that while there is no specific agenda, the three premiers want a direct conversation to discuss mechanisms for defending the Arctic coastline.

“I know our senior officials have been working around the clock really on this particular point, and we’ll just continue to have the conversation until the meeting is scheduled,” Akeeagok said.

One of the concerns voiced in the letter, which was obtained by Nunatsiaq News, is Russia’s growing economic and military presence in its northern regions.

“As Russia’s global investments and interests grow, we fear that Russia’s aggression will inevitably present itself into Arctic affairs,” the letter stated.

In 2020, Russia put through legislation that encouraged the increase of oil and gas infrastructure in its north, with climate change allowing an increase in the number of shipping routes through the Arctic. Then, just over a year later, Russia increased its military might in the Arctic by adding soldiers and a missile-launching system in Franz Joseph Land, a previously uninhabited Arctic island in Russia.

But in terms of immediate problems, Akeeagok said, both in his statement on Monday and in the territorial premiers’ letter, that Russia’s aggression will compromise the Arctic Council, an international body for discussing Arctic affairs. Russia is nearly halfway through a two-year term as the Arctic Council chair, a term that runs until May 2023.

Last week, Canada and six other Arctic nations announced they plan to pause all Arctic Council meetings as a result of Russia’s invasion of Ukraine.

In response to what Canada is doing to defend its Arctic sovereignty, Government of Canada’s Department of National Defence spokesperson Daniel Lebouthillier said the department is working on several northern initiatives. Those initiatives include expanding the Canadian Rangers, buying more Arctic vehicles and improving satellite surveillance of the North.

– with files by Mélanie Ritchot