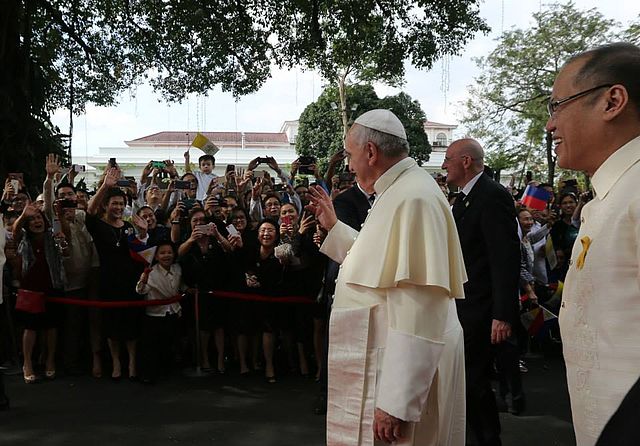 Pope Francis greets a crowd during a visit to the Philippines in 2015. Iqaluit should be preparing now for a papal visit later this year, says Coun. Joanasie Akumalik. (Photo by Robert Viñas, Wikimedia)

“The city should be preparing and planning,” Akumalik said during Tuesday’s council meeting at city hall.

When Queen Elizabeth visited the capital of the then-new territory of Nunavut in 2002, the city built a road so she would have a “smooth ride” and cleaned up the area around the river, Akumalik said.

He suggested at least twice during Tuesday’s meeting that Iqaluit should be getting ready to host the Pope, but there was no discussion of the matter during the meeting.

There have been media reports that Pope Francis will include Iqaluit in his itinerary for a trip to Canada this summer.

On April 1, Francis apologized to three delegations of Indigenous Peoples from Canada — representatives of Inuit, First Nations and Métis organizations — for the role some members of the church played in Canada’s residential school system abuses.

Those schools, run by Roman Catholic and Anglican churches, were part of the federal government’s plan for separating Indigenous Peoples from their cultures.

When Francis gave that apology at the Vatican three weeks ago, he said he would like to come to Canada soon. There have been calls for years for the Pope to apologize in Canada to the people who were directly affected by the residential schools.

“We know this will be a major event,” Akumalik said, referring to the potential visit by the religious leader.

But Bell added that city officials have not been formally notified of any pending papal visit.

“We have not seen anything official yet,” the mayor said.

Despite that, in an email statement released earlier this month Premier P.J. Akeeagok also referenced an expected visit by Pope Francis to Iqaluit.

In it, he said “I believe that the Iqaluit visit will be another opportunity to engage with survivors of residential school and their families and to offer an apology for the church’s role in the systemic oppression of Inuit.”

RCMP Staff Sgt. Robert Gallant, who was at Tuesday’s council meeting to provide a monthly report on police activity, echoed the mayor when he was asked if police are ready for the security and crowd control issues that accompany a papal visit.

“There’s all kinds of discussion in the background. There is nothing official yet,” Gallant said.