One critic says video is ‘racist’; union says it shows testimonies freely given by Inuit workers 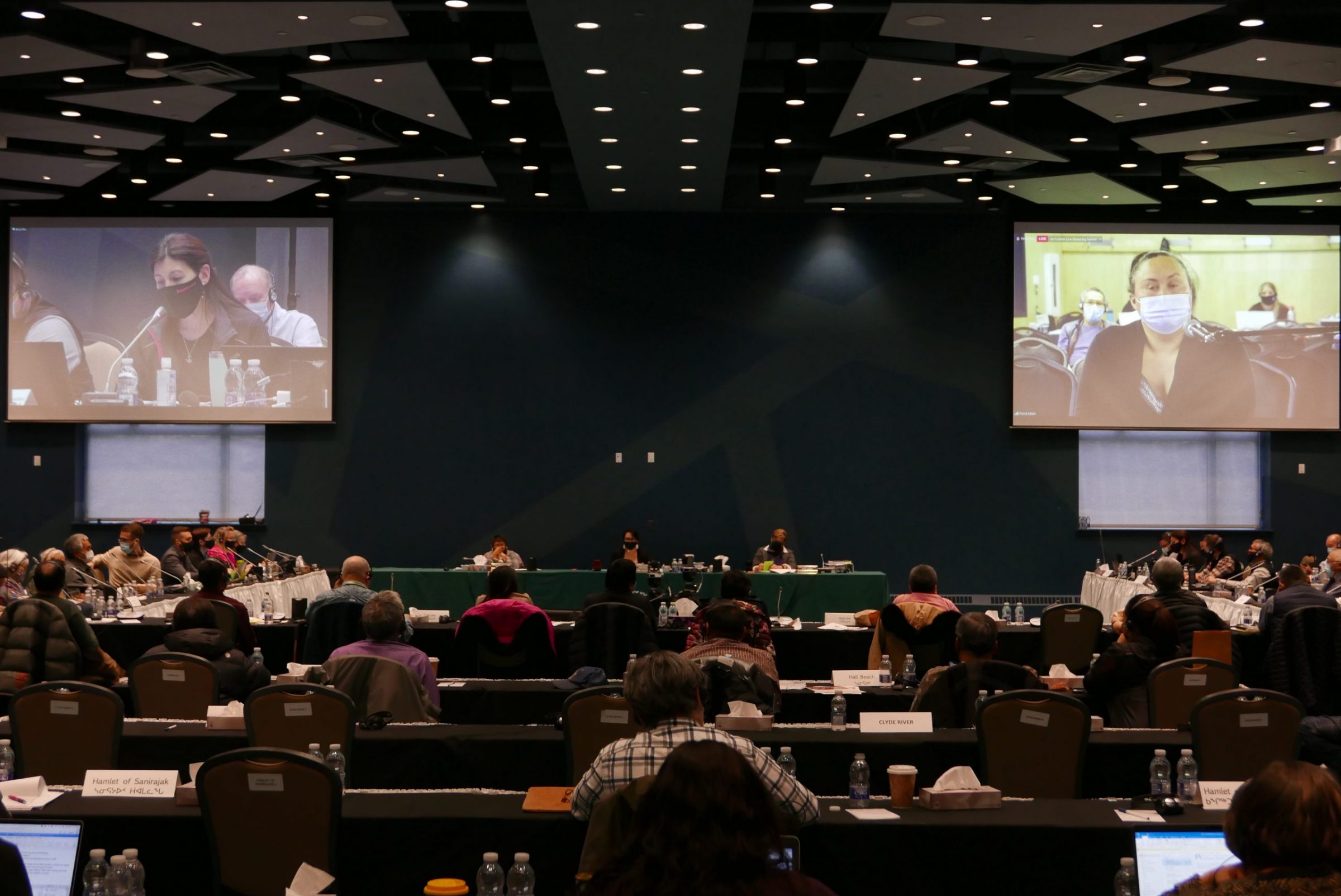 Inuit were self-sufficient before Baffinland Iron Mines Corp. existed and will continue to be if the company’s proposed expansion doesn’t go through, said a Pond Inlet resident Wednesday afternoon at the Nunavut Impact Review Board hearing.

The board is conducting a hearing into the mining company’s proposal to expand its Mary River mine. Opponents say the plan to build a railway to Milne Inlet and increase shipping threatens caribou and narwhal, integral to traditional Inuit culture.

“Saying how Phase 2 is the only way Inuit are going to survive — that statement is false,” said Anita Uvuttuvak at the Nunavut Impact Review Board hearing. “Inuit have survived for years before Baffinland existed.”

Uvuttuvak made the comment in response to a video played Tuesday evening during the community roundtable — time allotted to residents from affected communities to voice their concerns — produced by the International Union of Operating Engineers, Local 793, which represents Baffinland employees.

The video warns that the mine’s Nunavut employees could continue to experience layoffs, as they did during the COVID-19 pandemic, if the mine expansion is not approved.

“This tough reality, experienced on a temporary basis due to COVID, could be a permanent experience if Baffinland’s Phase 2 expansion is not approved,” the video’s narrator said.

One employee featured in the video said they he tells people that Phase 2 “should happen. And they just agree with me all the time, they’re jealous of wanting to work over there.”

Uvuttuvak said the video was filled with “brainwashing tactics to get Inuit to believe Baffinland is the answer to all their needs.”

The video was “culturally offensive and racist,” wrote Chris Debicki, a vice president with Oceans North, in an email to the board’s lawyer, Teresa Meadows.

Mike Gallagher, business manager of IUOE Local 793, said the union “strongly disagrees” with Debicki’s assertion that the video is racist.

“The video is a collection of testimonials freely given by our Inuit members at the mine and expresses their personal views and opinions concerning Phase Two,” he said in an email to Nunatsiaq News. “They want their voices heard during this regulatory process and as their union, we facilitated this happening.”

Debicki also objected to the NIRB allowing the video to be played because the union is not a registered intervenor, and so he said it shouldn’t be able to present during the community roundtable.

Meadows responded following the lunch break Wednesday, saying that several parties had objected to the video being considered by the board. They have until Nov. 8 to file their objections to the video, and Baffinland can reply up until Nov. 15.

In the meantime, the board will not file the video materials, pending the outcome of the decision.

Udloriak Hanson, a Baffinland vice-president, said the company had nothing to do with which employees were featured in the video, or what they were asked.

But Baffinland was thrilled when the union approached them to say they were going to make a video about employee support for the expansion, because many employees are scared to voice their opinions, Hanson said.

“So for people to disregard what some of those employees so courageously shared and so happily, I mean, some of them were so happy to share,” Hanson said, adding that more than 300 Inuit work at the mine.

“We need to celebrate that.”

Uvuttuvak received loud applause from attendees in the Iqaluit conference room — a rare display during the hearing — after she finished her 20-minute speech.

Uvuttuvak told the board about her experience growing up, and how there is hardly any wildlife left near Pond Inlet. She said the hamlet’s residents have been “treated like guinea pigs” and are expected to accept the expansion.

“[The expansion] will ruin our waters,” she said. “The people of Pond Inlet have already lost so much.”

Hanson said trusting the company will be hard, but that her, along with many Inuit employees at Baffinland, wouldn’t work there if they didn’t believe harvesting and hunting could coexist with a mine, she said.

The company wants to double its iron ore output to 12 million tonnes per year and build a 110-kilometre railway from the Mary River mine to Milne Inlet. The in-person, public review phase of its proposal is scheduled to end on Saturday.

After that, the board will prepare its recommendation for Northern Affairs Minister Daniel Vandal, who will either approve or deny the project.