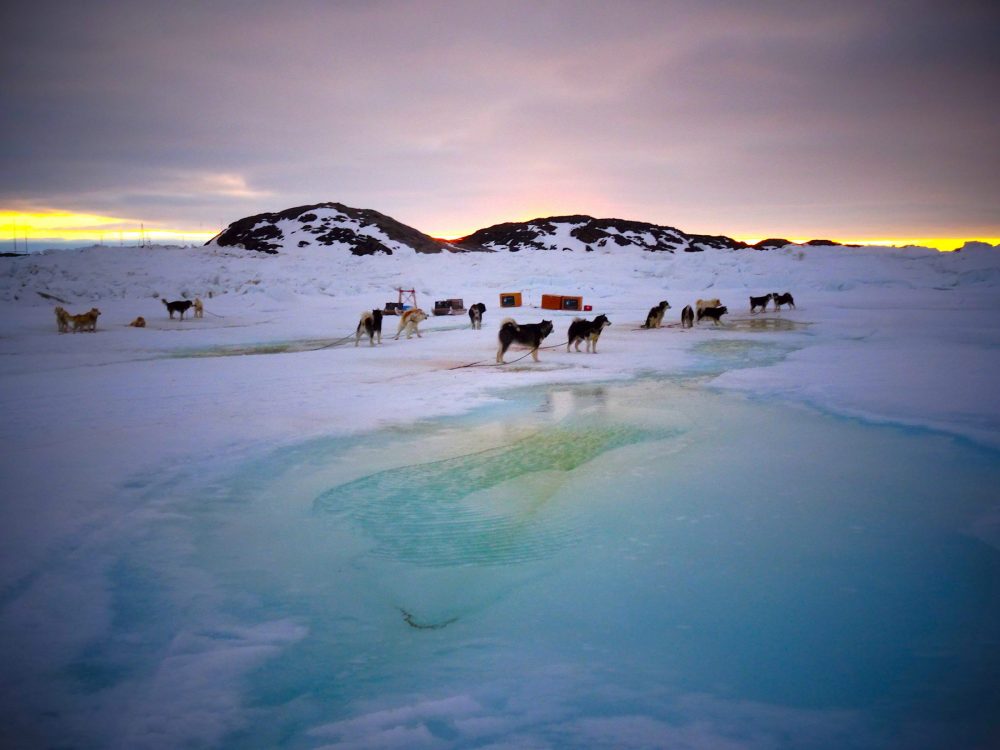 Inuit dogs stand on the melting ice on the causeway in Iqaluit in May 2018. The official name of these dogs as registered under the Canadian Kennel Club is Canadian Eskimo Dog. The group that oversees the breed is hoping to change that. (File photo)

In northern Canada, Inuit and qimmiit have worked alongside each other for centuries.

Capable of pulling heavy sleds over ice and snow for long periods, the thick-coated, resilient sled dogs are one of the world’s rarest dog breeds. They’ve been known to prove their value by spotting everything from game to potential predators to dangerous cracks in the sea ice.

The qimmiq, the traditional Inuit sled dog, is also the official animal of Nunavut, named by the legislative assembly.

Qimmiq, the Inuktitut word for dog, also refers to canines in general.

But according to the official records of the Canadian Kennel Club, the primary registration body for purebred dogs in Canada, these dogs are listed as Canadian Eskimo Dogs. The breed was registered with the CKC back in 1888 as Eskimo Dog. That name hasn’t been changed since, except when in 1986 “Canadian” was added to the breed’s name to distinguish it from the Greenland Dog.

The CKC is a national, member-based organization. It includes over 20,000 members and 700 registered breed clubs, including the Canadian Eskimo Dog Club, which provides registry services for purebred qimmiit in Canada.

The Canadian Eskimo Dog Club is asking the CKC to change the official name of the dog to “Inuit Qimmiq.”

Although the definition of a purebred qimmiq can be confusing, Rachel Attituq Qitsualik, a former columnist for Nunatsiaq News, wrote that Inuit don’t attach significance to a certain breed.

“I’ve never quite grasped whatever impulse overcomes people when they want to view their dogs as status symbols. Although Inuit have been known to be proud of their dogs, such pride lies more in having an efficient team or pup-bearing bitch than in an individual dog,” Qitsualik wrote.

“Having been raised in an environment where dogs were strictly valued for their utility, where with rare exceptions affection was peripheral, one can understand my rather slow adaptation to the idea of dogs as pets—especially house pets.”

But to do that, the club needs to gain the support of the CKC’s some 20,000 members. If the club’s application for a name change is approved, the CKC’s members will vote on the new name in September of this year.

The Edmonton Eskimos, a Canadian football team, has been widely criticized for its named. In 2015, Natan Obed, president of Inuit Tapiriit Kanatami, demanded that the team stop using the term.

“Consider the legacy of naming in our experience. In the past, non-Inuit imposed their own names onto our lands and bodies in place of centuries-old Inuktut ones. Inuktut place names were systematically substituted for English names that then became part of the basis for Canadian land ownership,” Obed wrote in a letter to Nunatsiaq News.

Foucault said for the most part, the response to the proposed name change has been positive. Some members, however, have taken issue with removing “Canadian” from the dog’s name.

But Foucault says it’s important to distinguish the dog as Inuit, rather than Canadian.

“The word qimmiq is being used because it’s the language of the people that developed the dog in the first place. And understanding that the Inuit have always referred to the dog as qimmiq, it came fairly easily in the discussion.”

As a club, Foucault says his members are also focused on preserving the breed, especially in the North.

“The breed over the last 10 years or so had maintained a pretty steady number in the low to mid 300s. So there’s still not a huge population, but it’s one that at this point is a sustainable number of dogs,” he said.

All of this was documented by the Qikiqtani Truth Commission, an Inuit-run body that from 2007 to 2010 gathered evidence from 345 witnesses at 16 public hearings held throughout the region, along with extensive archival research.

The effects of those colonial practices are felt throughout Nunavut today.

In August 2019, Carolyn Bennett, Canada’s minister of Crown-Indigenous relations and northern affairs, apologized to Qikiqtani Inuit on behalf of the federal government for these practices.

Combined with the introduction of the snowmobile and crossbreeding between other dogs like Siberian Huskies, the dogs’ population dwindled heavily. By 1963, the dogs were considered extinct.

Foucault said Bennett’s apology prompted the club to begin the process of changing its name.

“When it came to Canada, and we really started going into Canada’s role in this breed and what it is that Canada did to this breed, and having literally driven the breed to extinction…. That is not just any sled dog. This is the original dog. The dog that everybody saw as extinct. The same dog that was slaughtered in the thousands. It is the same dog. That’s another reason why the name is important, because this is the same dog.”

The vote wouldn’t be the first in the CKC’s history. It has already voted in favour to change the Mexican hairless to the xoloitzcuintli, the Dutch sheepdog to the schapendoes, and the sheepdog changed to the Belgian shepherd.

“I think this will also become an element of healing of past wounds and transgressions. Not only to get the breed back, but to get the namesake of the breed back as well. Not having Canadian in the name doesn’t make it any less Indigenous to the country. When people understand and accept that, that’s when the mind set changes,” Foucault said.