Qaqqaq back to work as Conservatives search for her challenger 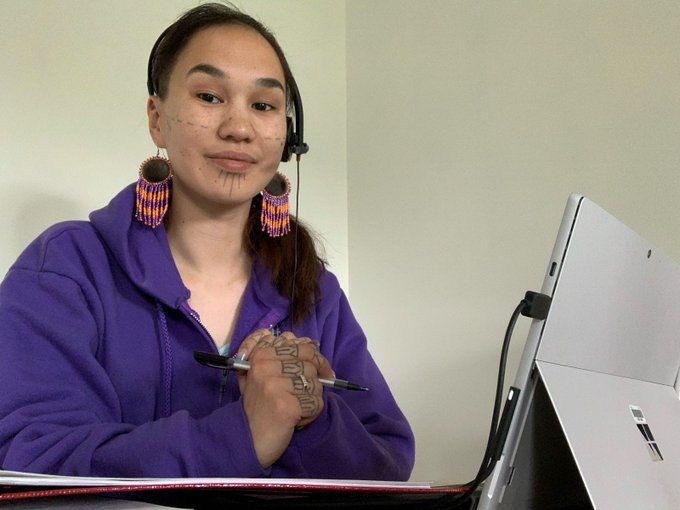 Nunavut MP Mumilaaq Qaqqaq announced her return to work following a two-weak leave of absence Tuesday. It came at the same time Conservatives announced their search for a candidate to run against her in the next election.

“Back at work today fighting for Nunavummiut in the (virtual) House of Commons for Question Period,” the NDP politician wrote on Twitter.

Qaqqaq thanked supporters for their well wishes overs the past two weeks. On April 27, she announced she was taking time off to tend to some undisclosed health issues.

The tweet included a picture of her sitting in front of a laptop computer and wearing a purple sweater.

“Proud to wear my @Pauktuutit sweater,” she wrote, referring to the national Inuit women’s organization.

Qaqqaq’s recent leave came about four months after she took off more than two months at the end of 2020 because she was suffering from what she described as “extreme burnout” and depression.

In January, she announced she would seek re-election and secured the Nunavut New Democrats’ nomination. Qaqqaq was elected in the 2019 federal election to represent Nunavut in the House of Commons.

On Tuesday, Conservatives in Nunavut announced their search for their next candidate.

“Now more than ever, Nunavut needs a strong member of Parliament, a person with proven leadership skills who has strong relations in the territory with Inuit organizations, non-profit and private sector organizations — a person who will build consensus and work with all Nunavummiut,” Conservative riding association president Paul Murphy wrote in an email.

Conservatives are looking for a candidate who is “highly motivated, personable [and] hard-working,” the party’s announcement states.

There has been no word from the Liberal party about who its next candidate will be.

The NDP, Liberals and Conservatives have all represented Nunavut over the past decade. Before Qaqqaq’s election, Liberal Hunter Tootoo was a cabinet minister in Justin Trudeau’s government, while Leona Aglukkaq was a minister in Stephen Harper’s Conservative government before him.

With Trudeau’s Liberals holding a minority government in Parliament, there has been widespread media speculation there will be an election within the next year.