Call for criminal investigation could lead to progress on reconciliation 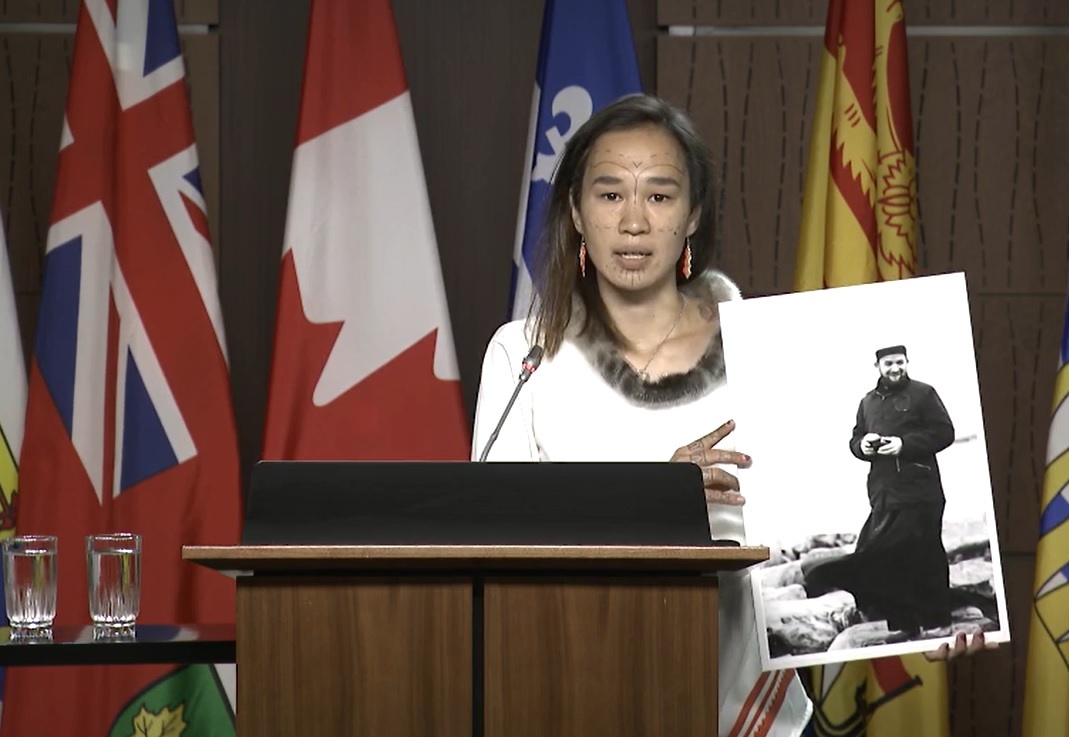 Nunavut MP Mumilaaq Qaqqaq holds a photo last month of French Oblate priest Joannis Rivoire, who is accused of sexually assaulting Inuit children who attended residential schools in Nunavut communities in the 1960s. The NDP has called on the government to investigate Rivoire and other alleged perpetrators within the residential school system. (Screen grab courtesy of CPAC)

With one deft move, Nunavut MP Mumilaaq Qaqqaq advanced the fight for justice over Canada’s mistreatment of Indigenous Peoples and, at the same time, painted the federal Liberal government into a corner on one of the country’s most pressing issues.

Qaqqaq and NDP counterpart Charlie Angus, an Ontario MP, called on Liberal Justice Minister David Lametti on Thursday to appoint what they called a “special prosecutor” to conduct a government-funded investigation into crimes committed against Indigenous Peoples, particularly at residential schools but also at other government-run institutions, such as sanatoriums for treating tuberculosis.

The government dismissed the NDP’s call, saying the justice minister doesn’t direct police investigations. Investigating crimes is the exclusive jurisdiction of the police. That’s an appropriate response from Lametti’s office. Law enforcement and the justice system do need to operate independently from politics to eliminate the prospect of politicians using their office to prosecute their opponents.

But what Canada is learning about the scope of the mistreatment of Indigenous Peoples suggests it’s much bigger than any police department can handle as part of its routine policing. Most residential schools are in sparsely populated, remote communities where the local police detachment might be just a few officers.

Qaqqaq is right that these circumstances require a unique mechanism to look into who did what to residential school children, whether their treatment was criminal and whether it’s possible to prosecute any offenders.

It makes sense to create an independent body to investigate crimes committed against Indigenous Peoples. It would be messy for the RCMP or provincial police forces to probe governments, politicians and churches. Certainly, police have effectively investigated these entities in the past, but never on the scale that might be required to get to the bottom of this situation.

Canada doesn’t have much experience in the kind of investigation the NDP described — an independent body with the power to investigate the government and to lay charges.

Whether it’s a special prosecutor, a public inquiry or a Royal commission, what’s needed is a commitment to get to the bottom of who did what, and whether they can be held criminally responsible.

The abuse of children at residential schools has been well known for a long, long time. But now, after many Canadians learned there are hundreds — maybe thousands — of unmarked graves near the school sites there is more than reasonable grounds to suspect that some of those dead children were victims of very serious crimes.

The same day Qaqqaq and Angus called for the criminal investigation, NDP Leader Jagmeet Singh said during a news conference that, for most Canadians, there was no cemetery attached to the schools they attended.

The fact that there are gravesites at residential schools is a sign, Singh said, that administrators knew that children would die.

While there’s no doubting that Qaqqaq is motivated by genuine anger over the mistreatment of residential school children specifically, and Indigenous Peoples generally, her call for a special probe was also a shrewd political move. In a bizarre twist of fate, Qaqqaq has done some of her strongest work as an MP since announcing last month she won’t be running for re-election.

With a federal election on the horizon, the NDP has created an issue with which they can beat the Liberals up on a key file that Prime Minister Justin Trudeau holds close to his heart.

Whenever Liberal candidates talk about Crown-Indigenous relations, their New Democrat opponents will repeat their party’s demand that the government create a special probe to look into crimes against Indigenous Peoples. New Democrats will point to Liberal inaction as proof the party doesn’t care. And if the Liberals do come around to creating a special inquiry, the NDP will take credit for making them do it. Politically, it’s a win-win for the NDP.

The sooner the Liberals act on Qaqqaq’s and the NDP’s recommendation, the better for them.

It would also be better for Indigenous Peoples – and help honour the memories of the children lying in unmarked graves outside residential schools.