‘I am reminded every step of the way I do not belong here,’ says Nunavut’s MP in House of Commons 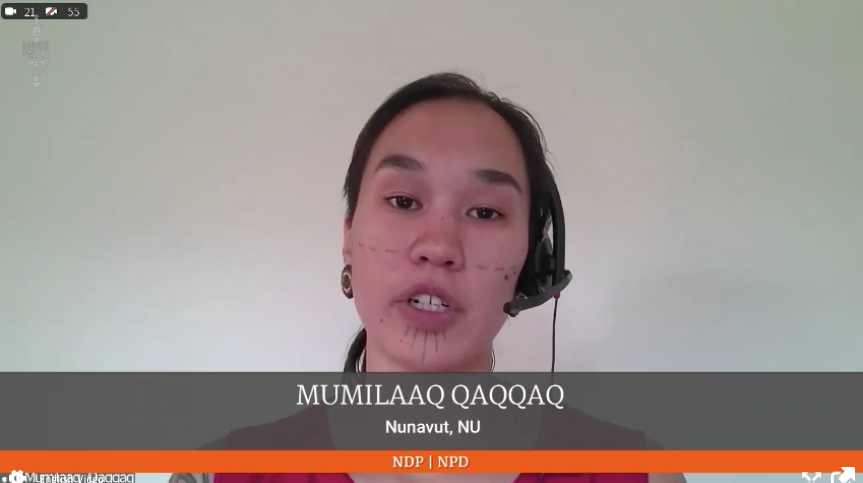 Mumilaaq Qaqqaq gave her farewell speech in the House of Commons on Tuesday, speaking out about being racially profiled by security at work. (Screenshot courtesy of House of Commons/ParlVU)

Mumilaaq Qaqqaq said she “never felt safe” during her time as Nunavut’s MP and accused the federal government of refusing to provide Inuit with basic human rights in the House of Commons Tuesday night.

In what she called her farewell speech, the Nunavut MP said she has been racially profiled at work and has had security staff jog after her and “nearly” put their hands on her.

“I am reminded every step of the way I do not belong here,” she said to her colleagues.

Qaqqaq announced last month she is not seeking re-election, after originally saying she would run again, about two months prior.

She said that young, marginalized people like her who decide to run for office face huge barriers, like hearing that they aren’t experienced enough for the job.

“Women have been told to sit pretty and listen,” she said.

“Disabled individuals have been shown they are not even worth the conversation.”

She said it is possible to reduce these barriers, but there is a refusal and unwillingness in the House of Commons to do it.

A recurring theme in Qaqqaq’s speech was the federal government’s unwillingness to provide basic human rights to Inuit.

“People in power have choices and consistently choose priorities that uphold systems of oppression, leaving babies sick in mouldy homes and parents missing their passed-on children because these powerful individuals do not think change is worth the money,” she said.

Qaqqaq spoke about women and girls who continue to go missing, children continually being taken into foster care “without regard for their well-being” and the suicide epidemic in the territory.

“Inuit kill themselves at the highest rate in the country,” she said, “and this institution refuses to care.”

Qaqqaq said that despite being called courageous, brave and strong, and hearing “pretty words” like reconciliation, diversity and inclusion, saying these things with no action to back it all up hurts.

“Maybe it is impossible for ministers to understand what we go through every day, but I am urging them and telling them to listen to us, believe us and do something about it,” she said.

In her remaining time in Parliament, Qaqqaq says she will continue to focus on housing, as she has since she was elected in 2019.

Earlier this year, she released a report on the “deplorable” housing conditions Inuit live in.

The report was based on a three-week housing tour. After that tour, Qaqqaq took a leave two-month of absence from her role as MP, citing anxiety, depression and extreme burnout resulting from what she saw. She later took another health-related leave for two weeks in April.

Recently, Qaqqaq has been outspoken about other issues like justice for residential school survivors and the importance of accounting for Inuit interests and concerns as Baffinland Iron Mines Corp. pursues an expansion at its Mary River iron mine, located on north Baffin Island.

On Monday, she tabled a private member’s bill to get Indigenous languages included on voter ballots in the next federal election.

So far, the NDP in Nunavut has not selected a new candidate for the territory, according to Charlotte MacLeod, the press secretary with the NDP caucus.