7 babies have died in the region since January 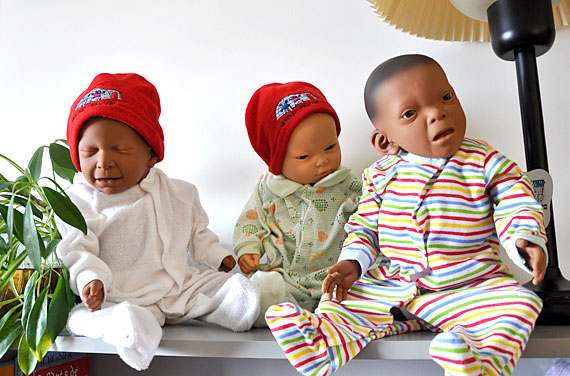 These three baby dolls at Kuujjuaq’s Tulattavik health are used to do prenatal education and awareness for expecting families in Kuujjuaq and along the Ungava coast. (File photo by Sarah Rogers)

A Quebec coroner is looking into why seven infant deaths have been reported in Nunavik since the beginning of the year.

The Nunavik Police Service says it reached out to Quebec’s coroner’s office this spring because it considers that number to be higher than normal.

“One coroner has been asked to oversee those infant deaths,” said Jean-François Morin, deputy chief of operations at the Nunavik Police Service, in an email to Nunatsiaq News.

All of the police investigations into these deaths have determined they were not suspicious and the babies likely died from sudden infant death syndrome, Morin said.

Sudden infant death syndrome is an unexplained death, usually during sleep, of a child under one year old, according to the Mayo Clinic.

The coroner’s office has yet to confirm this as the cause of the deaths in Nunavik.

“In order to obtain an accurate picture of the situation, we agreed to concentrate all the deaths of these young children in the hands of a single coroner who’ll be able to get an overview of the situation,” Jake Lamotta Granato, a spokesperson for the coroner’s office, wrote in French in an email to Nunatsiaq News.

Coroner Geneviève Thériault, who works from the organization’s northern Quebec office, has been assigned to oversee the Nunavik autopsies, he said.

In fact, autopsies are always ordered in Quebec when a young child dies.

“Investigations are still ongoing to determine the causes of death,” Lamotta Granato said, noting they can take several months to complete.

“The causes and circumstances of death are disclosed when investigations are completed and investigation reports are made public.”

In SIDS cases, the cause of death is still unknown, though research has shown it could be associated with defects in the part of a baby’s brain that controls breathing and arousal from sleep, according to the U.S. Department of Health.

Health Canada says the highest risk factors for SIDS are maternal smoking during pregnancy and putting an infant to sleep on his or her stomach.

For that reason, health officials in Canada have recommended since 1993 that babies should be put to sleep on their backs.

Babies who are male, born prematurely or of a low birth weight, and Indigenous infants have a higher incidence of SIDS in Canada, says Health Canada.