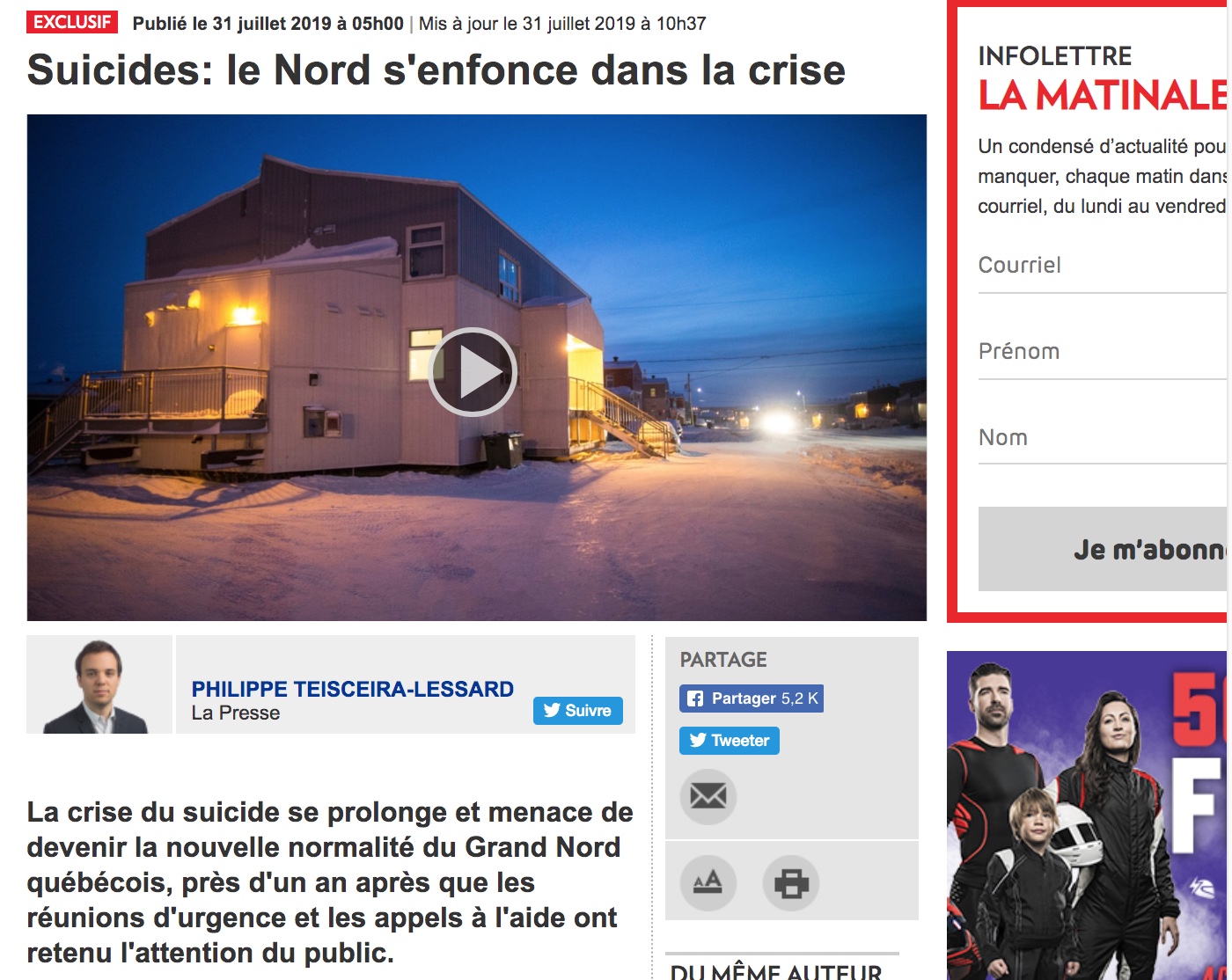 An article in La Presse by Philippe Teisciera-Lessard on July 31 is entitled “Suicide: The North sinks into crisis.” “The suicide crisis continues and risks becoming the new normal in Quebec’s Far North,” reads the subhead. The story appears to have led to a response from Nunavik’s Regional Board of Health and Social Services asking for media “to avoid sensationalism, avoid naming the method used and as much as possible avoid repetitive coverage that risks making such suicide tolerable or social acceptable.” (Screen shot)

Amid growing calls for action on Nunavik’s suicide crisis, the Nunavik Regional Board of Health and Social Services has asked media to be cautious in covering suicide in Nunavik.

The region, with a population of only about 13,000, has experienced 19 deaths by suicide so far this year.

The Aug. 2 letter to media came after a recent article published in the widely read Quebec daily, La Presse, drew attention to a Quebec coroner’s report on a Kuujjuaq woman’s death by suicide in 2018 and provided numbers on recent suicides in Nunavik.

The letter to media said such coverage can lead to “contagion, media overkill and heightened risks” for suicides.

“We understand the interest in this sensitive topic as well as our regions particularities but we must insist on the fact that a certain type of journalist treatment can further burden the most vulnerable among us and foster suicide contagion,” said the letter signed by Minnie Grey, the executive director of the board, and Solène Tanguay, the assistant director general of the Quebec association for suicide prevention.

“It is important to avoid sensationalism, avoid naming the method used and as much as possible avoid repetitive coverage that risks making such suicide tolerable or social acceptable.”

The Quebec coroner’s report cited in the July 31 La Presse story is a public document.

Such coroner’s reports, based on investigations routinely carried out to identify the deceased person, the date and place of death, as well as the causes and circumstances of death, may also be used to make recommendations to prevent further deaths, as they have been in Nunavut.

The coroner’s report cited by La Presse, and obtained by Nunatsiaq News, looked at the death last November of Charlotte Papak, 55, who died in Kuujjuaq on Nov. 15.

According to the report, Papak spent the evening with friends playing bingo. The evening went on as usual although Papak was rather quiet, the report notes.

After Papak’s body was discovered, a farewell letter was found in the right pocket of her jacket. This letter mentioned that no one had forced her to do this, that she didn’t feel loved by anyone and she had nowhere to go.

Papak had recently been evicted from her home because she owed money to the Kativik Municipal Housing Bureau and had been living with family members. She was not known to be depressed, and no one close to her had seen any signs of suicide intention or previous attempts, the report said.

Papak’s was one of 36 suicides in Nunavik last year, La Presse said, citing figures it had obtained: since the start of 2019, there have 19 suicides, including five by children.

Today, Agnès Gruda, of La Presse, who has written about Nunavik on several occasions, called the number of suicides an “epidemic” and “a national tragedy” in an editorial.

Gruda said Quebec must to step up and do something, perhaps by bringing in more resources, accelerating housing construction programs and organizing a major effort among all the parties.

“Allowing Inuit to themselves define the best way to fight suicide doesn’t mean that Quebec should stand passively by. Quebec has the power to send a clear signal that this scourge that is ravaging the North is not acceptable and that it’s ready to take the big steps to fight it,” she said.

That’s similar to what Inuk leader Mary Simon, originally from Nunavik, asked for last year in an online petition that continues to gather support.

Simon’s petition, spurred on by the death of her niece by suicide, asks for Canada and Quebec to “publicly declare the incidence of suicide in northern Quebec a National Crisis and publicly acknowledge that this is contrary to Canadian and Quebec ideals, values and principles, and contrary to the Honor of the Crown.”

Simon asked, as an immediate response, that the prime minister of Canada and the premier of Quebec jointly appoint a special representative “to enact immediate implementation of diagnostic, treatment and counseling programs, for combating these excessive incidents of youth suicide with adequate professionals, facilities, and financial resources, including, but not limited to, addiction facilities and services, employment and training, and educational programs for Inuit of Nunavik.”

If you are in distress and need help, you can reach the following resources: