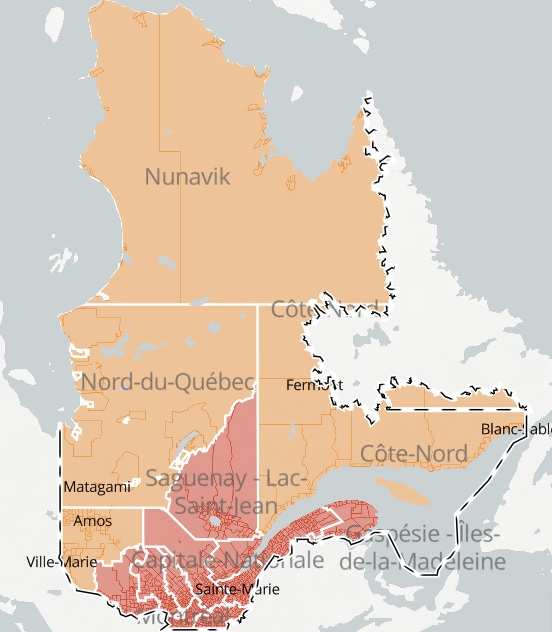 Quebec’s COVID-19 alert map has gone orange and red for the holidays.

That means some regions, including Nunavik, are set to see temporarily tightened measures in place to prevent the spread of COVID-19 over the holidays.

But while that would normally mean fewer people permitted at both indoor and outdoor gatherings, Nunavik health officials said they worked with the province to adapt those guidelines to accommodate the region.

“The Nunavik Regional Board of Health and Social Services pushed and explained to the province that we needed adjustments to better reflect our reality and have measures that are proportional to the actual risk,” stated Dr. Marie Rochette, Nunavik’s director of public health, in an email to Nunatsiaq News Dec. 18.

That means the number of people permitted at private indoor gatherings remains at 10, and not six, as would normally be enforced in an orange zone.

“Otherwise, the majority of families would not be able to receive guests during the holiday season,” Rochette said.

Outdoor gatherings in Nunavik can still have up to a maximum of 250 people.

And while visitors are not permitted to visit long-term care homes in Quebec’s orange zones, Rochette said that in Nunavik, two people can visit elders who live in assisted living residences.

Rochette said health officials advise against indoor public activities, like the Christmas games typically held in community centres over the holidays, but if they are held, a maximum of 25 people are allowed to attend.

As with any gathering, she said physical distancing should be practised for people who are not from the same household.

There will be a gradual return to class at Nunavik’s schools between Jan. 11 and 20, depending on the return of teachers who have travelled south over their holiday break, which will require them to quarantine before returning to work.

Restaurants and bars can host up to six people per table and must end the sale of alcohol by 11 p.m.

Though there are no other orange zone measures that apply to Nunavik, the region will remain at a level three alert until Jan. 11.

Most other northern regions of Quebec have now also been elevated to orange, while the southern region of Quebec, including Montreal and Quebec City, remains red, the province’s highest alert.

Nunavik has seen 12 positive cases of COVID-19 since the beginning of September, though they have been largely isolated.

An earlier version of this story reflected Quebec’s orange zone restrictions first announced Dec. 16, which were then revised by the Nunavik health board on Dec. 18.