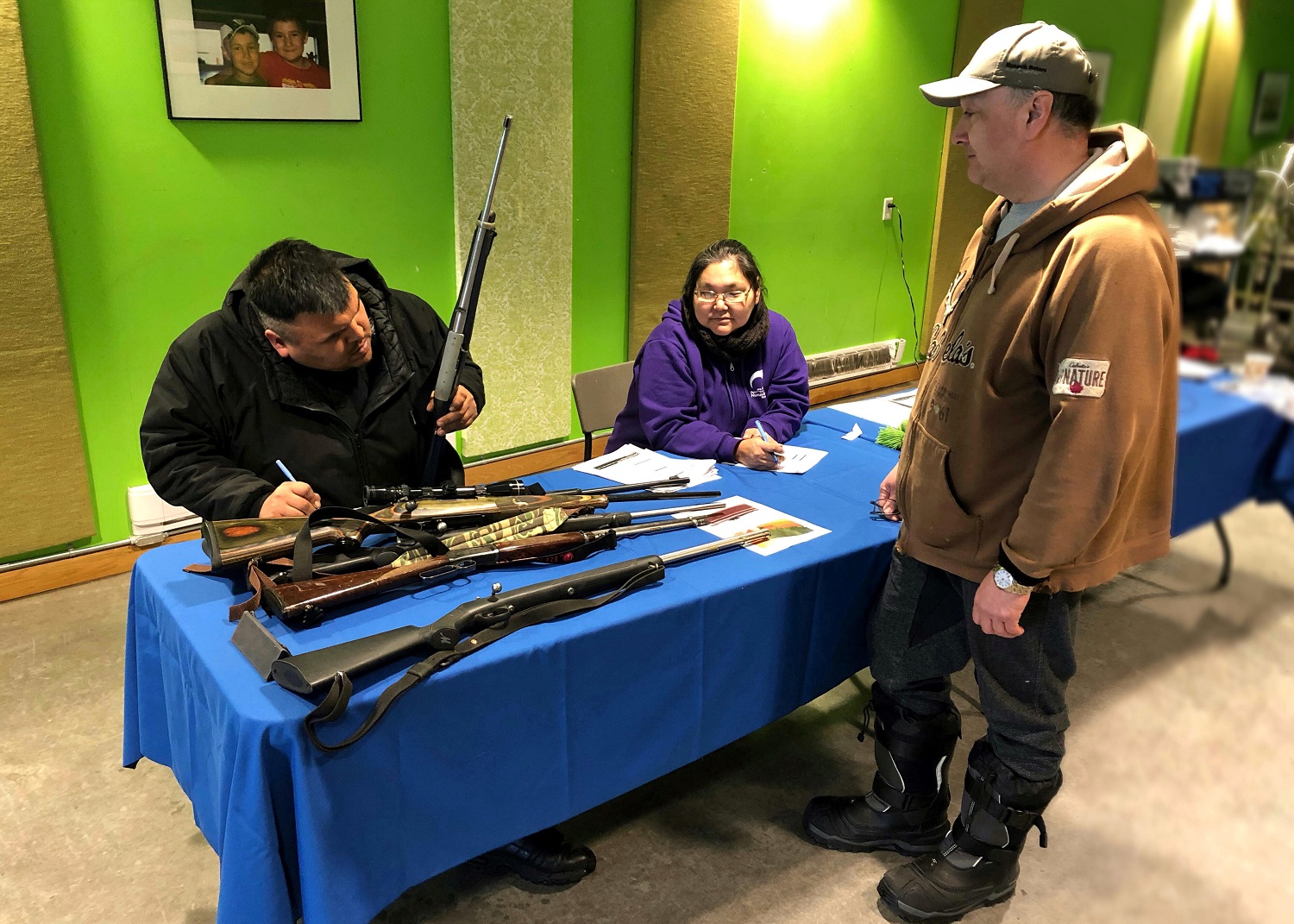 Allen Gordon brings his rifles to the Kattitavik town hall in Kuujjuaq Jan. 28 to have them registered at a KRPF-coordinated clinic. Quebec’s firearm registry set a deadline of Jan. 29 for all gun owners to comply. (Photo by Isabelle Dubois)

Tuesday marked the deadline for Quebec’s gun owners to register their weapons, prompting a last-minute scramble among residents of Nunavik to comply with the province’s registry.

Quebec’s previous Liberal government put the registry into place Jan. 29, 2018, giving gun owners a full year to register their weapons before they faced any penalties.

Last week, with just days left to register, the newer Coalition Avenir Québec government said it would loosen some restrictions to “simplify” the process of registering firearms.

Quebec’s Public Security Minister Geneviève Guilbault said Jan. 23 that those proposed modifications include giving long-gun owners more time than the 15 days currently required to inform the registry of a change in the location of a gun.

Gun owners also no longer need to register the length of the barrel of their firearm; the gun’s serial number is sufficient.

“I have said it many times and I repeat: our government is committed to listening to the public,” Guilbault said in a Jan. 23 release. “We have read their requests and we want to act accordingly.”

For many years, however, Nunavik Inuit have asked to be excluded from the registry, saying their harvesting rights under the James Bay and Northern Quebec Agreement should exempt them.

Even after the registry was launched last year, government officials pledged to support the region through the registration process, though regional organizations like Makivik Corp. and the Kativik Regional Government say they weren’t consulted.

Quebec’s Ministry of Public Security said in an email to Nunatsiaq News that the province has provided an Inuktitut-language explainer to KRPF detachments throughout the region.

Public Security said that, as of this week, more than 342,000 firearms have been registered under the new system, but couldn’t specify how many of those applications originated in Nunavik.

The province has estimated there are more than 1.6 million firearms across Quebec.

Quebec’s firearms registry will continue to process applications, even after Jan. 29, on its website.

Any gun owners who have not complied by Jan. 30 are subject to penalties up to $5,000 if they’re found in possession of a non-registered firearm.