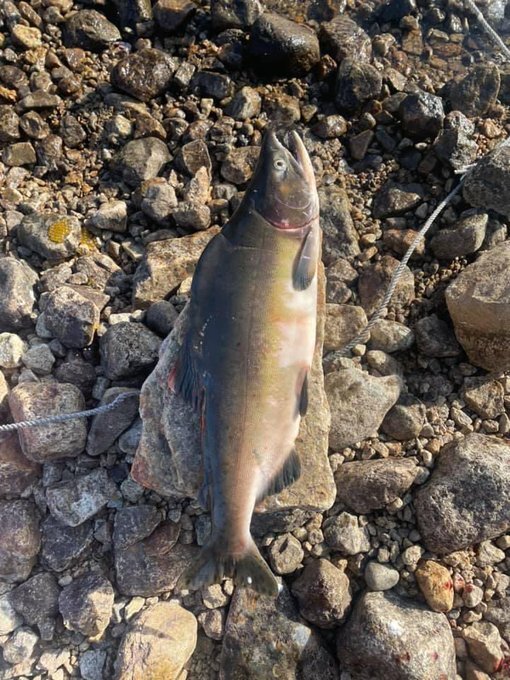 This pink salmon was caught southeast of Iqaluit on Sunday. (Photo courtesy of Sam Tilley)

Species’ appearance is yet another sign of warming Arctic waters

Sam Tilley spotted a surprising and not so attractive catch when fishing in Iqalugaaruk Lake about 65 km southeast of Iqaluit on Sunday: a pink salmon.

The unusual catch is yet another sign of climate change, according to a federal government biologist.

Karen Dunmall, a biologist with Fisheries and Oceans Canada, said pink salmon normally prefer warmer waters than the Arctic has been able to provide. But with the Arctic warming at up to three times the rate of the rest of the world, its waters are becoming more approachable for newcomers like this species.

“The fact that [pink salmon] are there indicates there’s change going on,” said Dunmall, who also runs the Arctic Salmon Project.

Pink salmon have previously been seen working their way to the Arctic. Earlier this year the species was spotted in Nunavik and was previously found in the western Arctic.

While pink salmon has been termed “invasive” by bodies such as the Quebec government, Dunmall prefers to not to use that term.

Dunmall said the fish is simply north because the water temperature is allowing them to migrate there. But she said it’s unlikely that pink salmon will establish themselves in the Arctic soon.

The species need waters that are not at freezing temperatures to spawn, Dunmall said, and during Arctic winters that means pink salmon will have limited options for their eggs to survive.

But Dunmall said communities that have found pink salmon have been curious as to what the implications of this species’ arrival means for their waters.

“I think it’s normal to have an immediate response to something strange or unusual as potentially negative, but we don’t know that yet for salmon,” said Dunmall.

Dunmall asks anyone in Nunavut who finds a pink salmon to send the fish to the Department of Fisheries and Oceans.

By examining a fish’s DNA and muscle tissue, DFO researchers may learn where the fish has been and where it’s migrated from. That in turn may help them better understand the species’ impact on the North.

“It will give us some clues to answer people’s questions about the strange fish that are showing up,” Dunmall said.