RCMP in Iqaluit to resume body-worn camera use, commander says 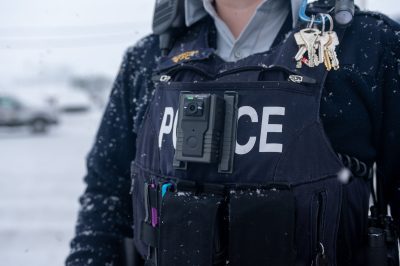 RCMP officers in Iqaluit will field test body-worn cameras for eight weeks this fall as the police force prepares to roll out the technology for all its officers across Canada, says Chief Supt. Amanda Jones. (File photo by Dustin Patar)

Police in Iqaluit will be putting body-worn cameras back on this fall as the RCMP field-tests the devices before rolling them out to Mounties across the country, says Chief Supt. Amanda Jones, commander of the RCMP’s Nunavut detachment.

“The objective of the field test will be to verify the contractors’ ability to meet the RCMP’s requirements in an operational context,” Jones told Iqaluit city council during Tuesday’s meeting.

Iqaluit will be one of three communities where approximately 300 cameras will be tested for about eight weeks this fall, she added. The other communities are in Nova Scotia and Alberta, but Jones did not name them in her council presentation.

The federal government is in the final stages of buying the cameras from a supplier.

The Nunavut capital was the site of the RCMP’s six-month pilot project from November 2020 to May 2021. In that time, 53 officers were equipped with the cameras and trained in how to use them, she said.

Some were from the south and had come to work in the Iqaluit detachment, which normally has 28 officers assigned to it. Because they were filling in during the pilot project period, those southern officers had to be trained in camera use.

During the pilot project, officers recorded 3,600 videos from 5,400 calls. It led to about 525 hours of footage, six per cent of which police adapted for use in court proceedings, Jones told councillors.

The goal of the pilot project was to identify the best practices for the use of the cameras by police, engage the public about their perception of cameras, and gather feedback from the officers who actually used them.

Following the pilot project, the RCMP and federal government decided to adopt the devices for all of the police force’s officers across Canada.

Mayor Kenny Bell reminded council he had joined other politicians in calling for police to be equipped with cameras. He thanked the federal government for selecting Iqaluit as the site for the pilot project.

“I know our citizens appreciated it,” Bell said.

Jones reiterated to council the results of a survey conducted after the pilot project, in which 70 respondents gave “overall positive views.”

Most agreed body-worn cameras would increase the public’s trust in police and increase public safety. About one-third of respondents agreed cameras would reduce police use of force during calls.

Jones noted, however, Inuit were underrepresented in the survey, possibly because they had concerns their responses were going to be collected by the RCMP.

In the future, the RCMP would consider a “different approach” to gathering data, such as using a non-police, third-party data collection agency to conduct surveys.