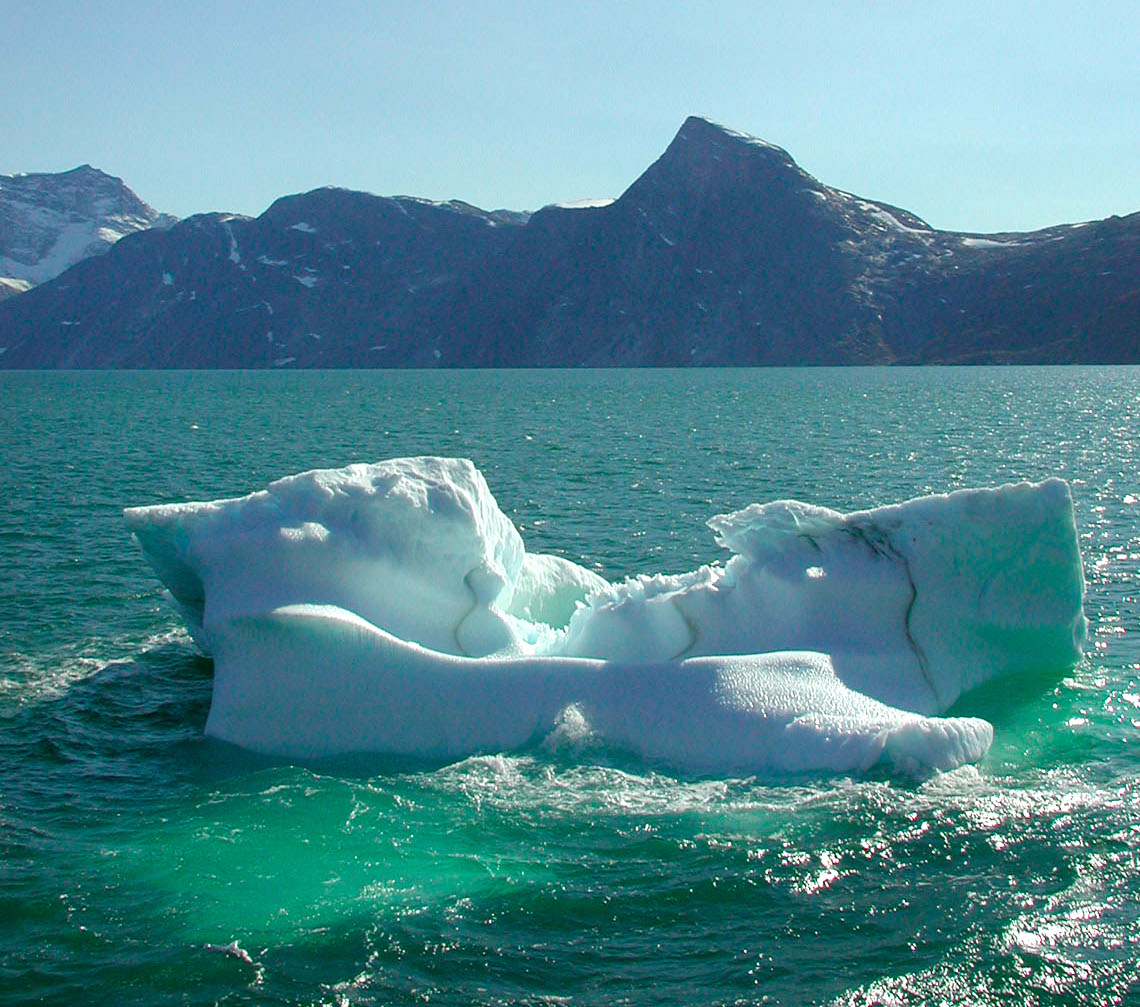 Sea ice off Greenland is seen in this undated file photo. (Photo by Jane George)

By Robbie Mallett, UCL
The Conversation

An unusual pattern of winds drove old Arctic sea ice into a precarious position in the winter of 2020. Now in warming waters, large swathes of the Arctic’s diminishing store of old ice lie at risk of melting. But how did this happen, and why is old ice so important?

When winter’s darkness falls on the Arctic Ocean, temperatures plunge to below -30°C. Existing floating ice thickens as the seawater below freezes, and the ice advances into areas that were previously open water. In summer, when temperatures rise and the sun shines for months at a time, the ice thins and retreats. Each September, scientists wait and watch for the annual minimum coverage of Arctic sea ice – a useful indicator for how fast the region is changing.

Ice that survives the summer melt season endures for another winter. Some ice even survives several summers before finally melting. This happens particularly in the colder regions near the North Pole. Ice that survives the summer is known as perennial ice; battle-scarred from its ordeal, it ends up thicker, rougher and more resilient. It’s an important part of the climate and ecology of the Arctic and it’s disappearing due to global heating. 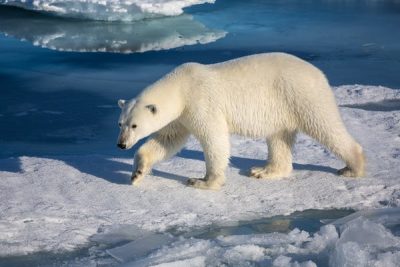 When sunlight hits the Earth, it’s either reflected or absorbed. Reflected light bounces back into outer space, whereas absorbed light heats the planet. Sea ice covered in snow reflects up to 90% of incoming sunlight, making it a powerful defence against global warming. But as polar sea ice melts due to climate change, sunlight increasingly hits the ocean, where over 90% is absorbed.

Perennial ice is particularly important because it’s more capable of surviving the summer and shielding the Arctic Ocean from the sun and keeping the region cool. But every year the ice melt season lengthens and the growth season shortens. And both seasons in the Arctic are getting hotter. These factors conspire against perennial ice, and less has been surviving the melt season every year.

To maintain a healthy perennial ice cover in the Arctic, it’s critical that the ice stays out of warm waters where it might melt in summer. Sea ice moves around the Arctic Ocean as it gets blown by the wind. If it stays in the cold regions, where ice can survive the summer, it has a good shot at becoming perennial ice. If the winds blow it southward into warmer waters, its chances of survival drop dramatically.

In February 2021, my academic colleagues and I observed a startling weather phenomenon in the Arctic. The polar vortex, a ring of anticlockwise-flowing wind that holds a pool of extremely cold air over the Arctic, collapsed, resulting in a new record for the region’s highest surface air pressure. Cold weather then moved southwards at the surface, causing UK temperatures to fall to their lowest level since 1995. In Texas, extremely cold weather paralysed the power grid, leaving four million people without power.

In the Arctic, the breakdown of the polar vortex produced an exceptional pattern of surface winds that swirled clockwise about the centre of the Arctic Ocean like water around a plughole. These swirling winds spun the floating icepack like a spinning top. In doing so, they drove the Arctic’s perennial ice from a relatively safe and cold position north of Greenland into an area where ice increasingly can’t survive the summer: the Beaufort Sea.

Over the winter, the Beaufort Sea filled with perennial ice such that in the last week of February 2021, it contained a record fraction (23.5%) of the Arctic Ocean’s total perennial ice cover. This is where things get really interesting. 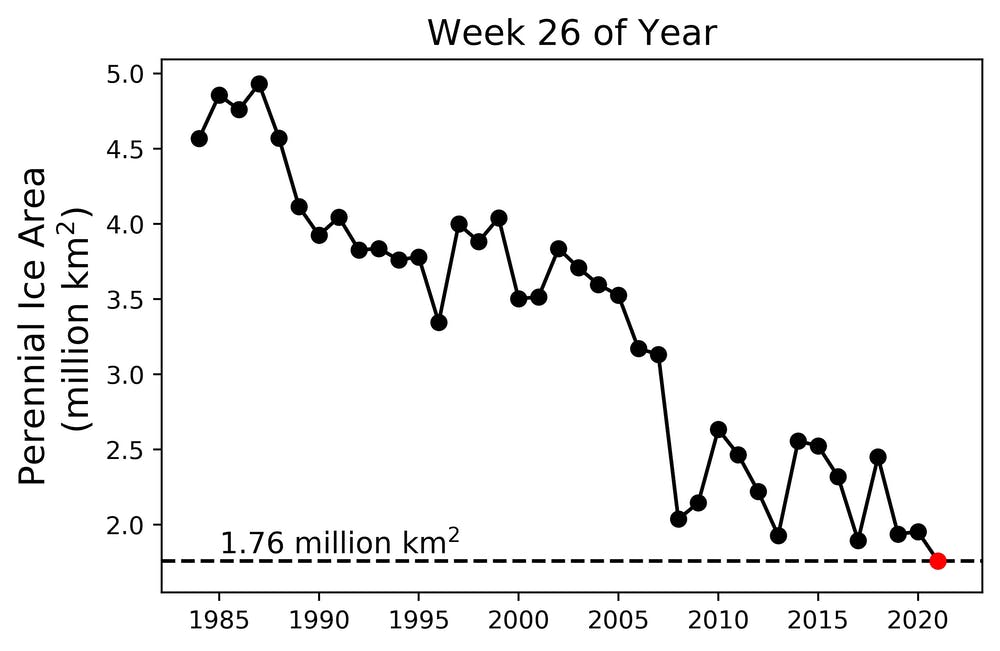 Perennial ice is, in theory, resistant to melting in summer. It’s thicker, and generally has a deeper cover of protective snow on top. By positioning robust ice in an area where ice typically melts, scientists may record more ice coverage come the September minimum. But this will come at the cost of the perennial ice cover itself which, while robust, is more precarious than ever in a melt-prone region.

This highlights the fact that there is no single barometer for the health of Arctic sea ice. The coverage at the September minimum is important (and highly publicised) but so is the coverage of thicker, more robust perennial ice. These two metrics will probably tell different stories in September.

So what does the future look like for the Arctic’s old ice? As the region continues to warm at three times the global average, less and less of the ocean will become survivable for ice in summer. 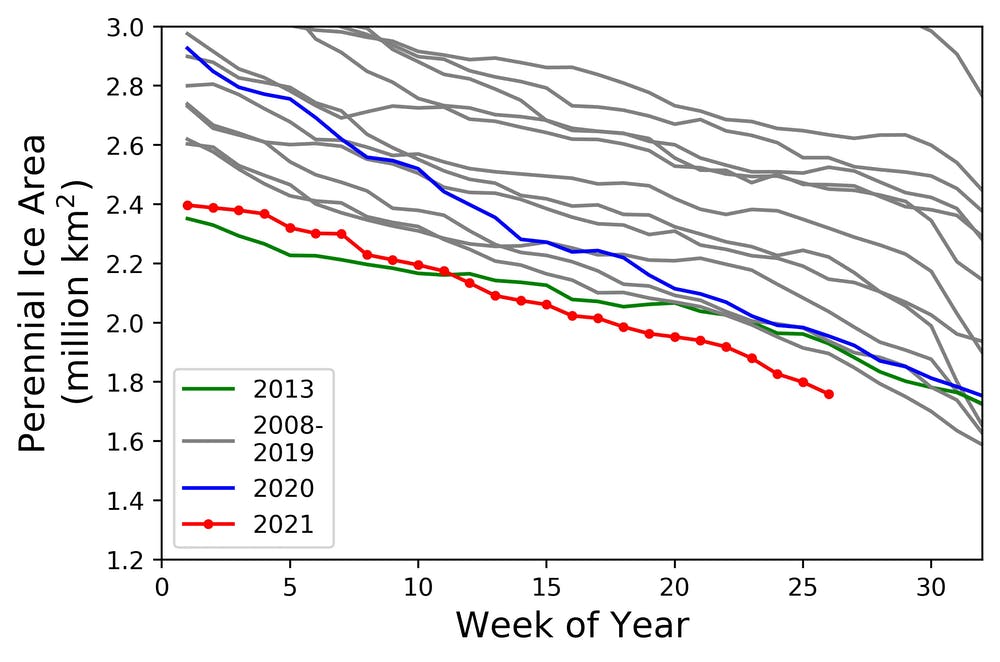 How perennial ice area in the Arctic has changed each year since 1984.
(Image by Robbie Mallett)

Recent research using the newest generation of climate models projects that the coverage of sea ice at the September minimum will fall to conditions recognised as “ice free” around 2035. Since the beginning of the satellite record in 1984, the coverage of perennial ice has roughly halved, and this downward trend will continue.

In the last week of February 2021, the coverage of perennial ice was the second lowest on record, behind 2013. At the time of writing, using the most recent data, the perennial ice coverage has decreased substantially and now sits at the lowest level on record – its precarious positioning since winter has likely played a role. With more than a month remaining of the melt season before the September minimum, there’s lots still to play for. But it’s likely that 2021 will set a new record for the lowest perennial ice cover.