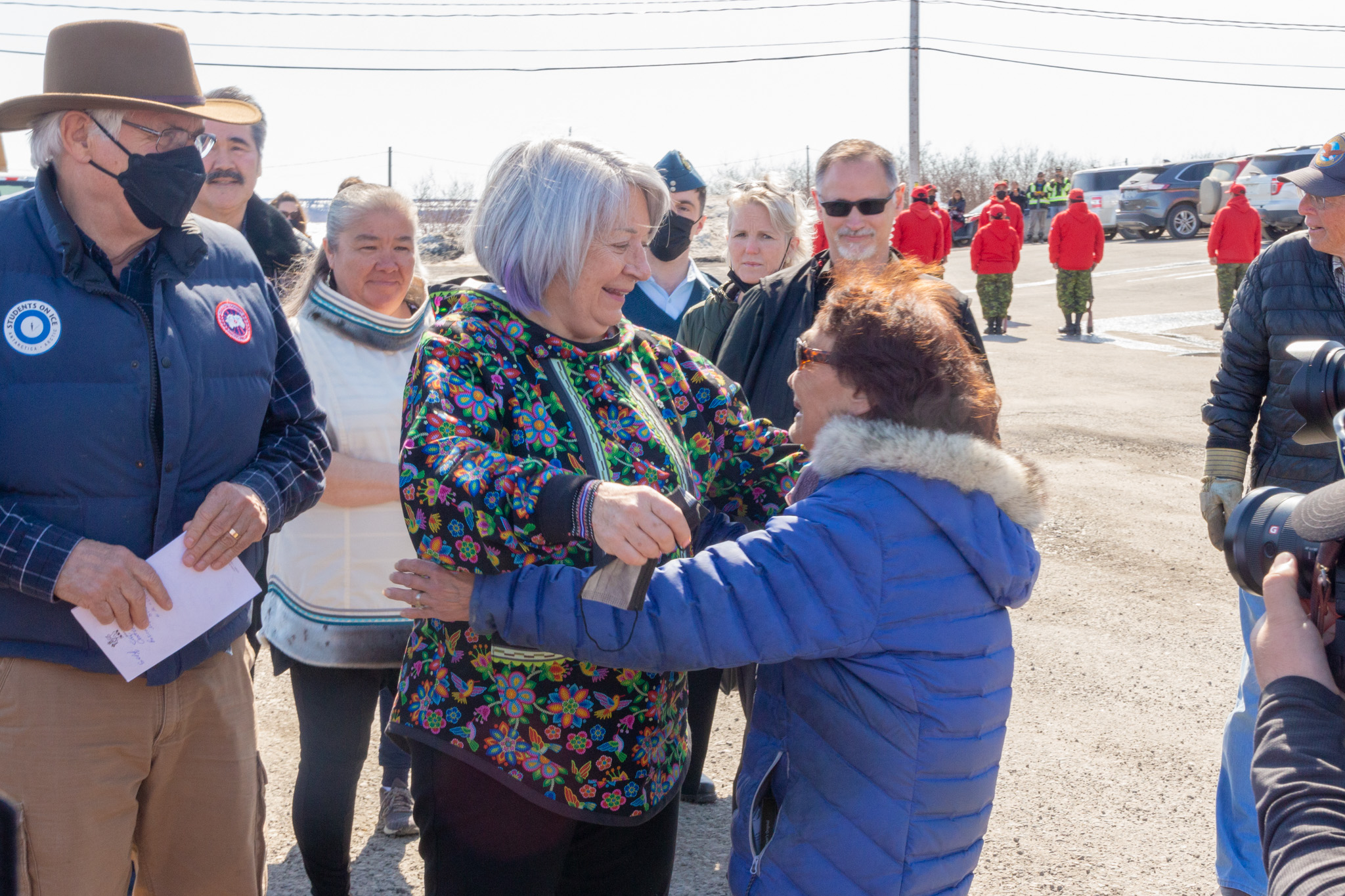 Gov. Gen. Mary Simon, left, welcomes childhood best friend and sister-in-law Louisa Berthe May in a warm embrace during Simon’s visit to Kuujjuaq in May. (Photo by Jeff Pelletier)

It started with a text message from my managing editor, Corey Larocque, on a Friday night just after 9 p.m. I was still settling in back home in Ottawa, after two and a half weeks working at the Nunatsiaq News office in Iqaluit.

“Hey, Jeff. Sorry to bother you on a Friday night. Check your email. Killer assignment for you if you want it,” the text said.

I opened my email on my phone and read the embargoed news release from Rideau Hall: Gov. Gen. Mary Simon was travelling to her home region of Nunavik for an official visit.

“Just saw, I’m free to travel if needed,” I responded.

A week later, I landed in Kuujjuaq for my first visit to Nunavik, and what a first visit it was.

I’ve covered events with the Governor General before, but none were like this assignment: the week I spent in Nunavik following Simon around Kuujjuaq, Kangiqsualujjuaq and Inukjuak was one of the most rewarding experiences of my young career as a journalist. 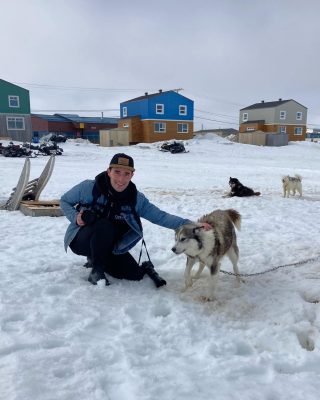 Jeff Pelletier is pictured here with a sled dog belonging to Ray Berthe Palliser in Inukjuak.

Much of the protocol for a vice-regal visit was there, with meetings and photo ops with dignitaries and other officials. At the same time, Simon and her husband, Whit Fraser, brought a refreshingly casual demeanor to their jobs as royal representatives.

If Simon saw an old friend, family member, former colleague or anyone who wanted to meet her, she’d greet them either with a hug or a handshake, and speak with them in Inuktitut.

Fraser brought a mix of charm and humour to his introductions, including one meeting where he introduced himself to Inuit representatives simply as someone who “married well.”

Simon’s visit to Nunavik seemed to be a visit of care for her.

Although we journalists were there with cameras capturing photos and video, this visit was not just a series of photo ops. Simon spent more time listening than talking, showing clear interest in the people she visited.

I also learned a lot from each of the organizations we visited. I got used to having the Governor General around, as I flew with her and the other journalists in an Air Inuit charter following her from event to event.

It was especially interesting to watch folks from the Unaaq Men’s Association in Inukjuak cut a dogsledding rope from sealskin.

Overall, a week spent travelling Nunavik with Simon, her entourage and a really fun group of national journalists was the reporting experience of a lifetime.

Having seen Simon around Ottawa after she took on the role of Governor General of Canada, it was moving to observe the way people in her home region looked up to her, and interesting to watch her in her element, surrounded by people whom she viewed as family, friends and neighbours.

On top of that, I’ll never forget the kindness of all the Nunavimmiut who greeted us along the way at every airport, school and event we attended.

I can’t wait to make it back to Nunavik again in the new year. I really hope to visit other communities and to continue telling stories about people from across the region.

The hospitality we experienced in every community was heartwarming, and I hope to experience it again sooner than later. Nakurmiik!