Researchers watching the balance between Nunavik’s wolves and caribou

While the hunter depends on the hunted, their populations aren’t always in sync 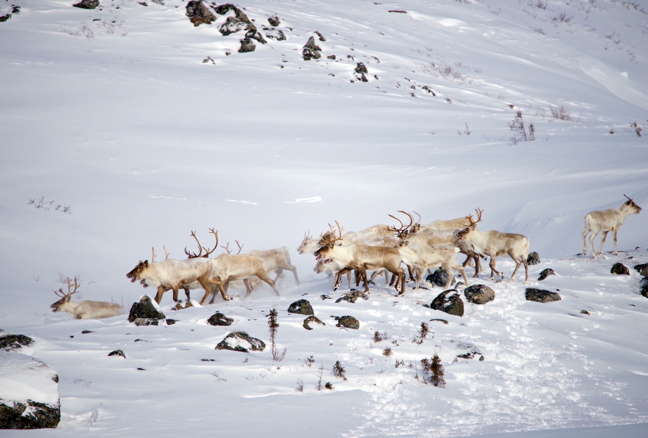 Hunters and governments are watching the dynamics of the Leaf River caribou herd population, seen here, and that of their main predator, wolves. (Photo by Felix St-Aubin/Makivik Corp.)

The wolf and caribou populations in Nunavik are constantly in flux, and closely related. But the number of wolves seen by hunters has some concerned.

“There are many wolves nowadays and the wolves get the caribou,” said Sarollie Weetaluktuk at the February meeting of the Kativik Regional Government.

“Caribou now only get one to two calves and the wolves get 10 to 12 calves.”

This was also a concern the provincial Ministry of Forests, Wildlife and Parks recently heard from the Hunting, Fishing and Trapping Coordinating Committee, said Joelle Taillon, a wildlife biologist with the ministry.

The coordinating committee includes Cree, Naskapi and Inuit members and was formed under the James Bay and Northern Quebec Agreement to both advise provincial and federal governments and manage hunting, fishing and trapping in the region.

Taillon said the increased presence of wolves is something they are hearing about at the provincial level and following closely.

“We’re aware of that and we see that,” she said, but there is limited data on Nunavik’s wolves, and how that data is changing.

Researching the relationship between predator and prey

The provincial ministry works closely with the Caribou Ungava research program, through Laval University, to study the relationship between caribou and their predators, which also include black bears.

The research program was established in 2009, according to its website, and its current focus is the factors that affect the ups and downs of the caribou population and their movement on the land, as well as the habits and environment of caribou predators.

Working with hunters, researchers have gathered wolf carcasses to determine their annual diet. Through this, they’ve seen that in the summer, wolves will eat fish, birds, moose and beaver if they have access to them.

But during the winter, Taillon said, caribou is their main source of food.

Using a telemetry collar system, they’re tracking wolves to see when and how much they are preying upon caribou during the winter, she said.

By understanding the predation rate, they’ll be able to predict, for example, that a pack of wolves will hunt so many caribou from the Leaf River herd each week.

Through collars on both caribou and wolves, they’ve seen that wolves follow the Leaf River caribou through their range.

In the east, though, where Nunavik researchers collaborate with the Government of Newfoundland and Labrador, wolves are less apt to follow the dwindling George River herd.

Here, wolves remain near the treeline and feed on moose and beaver.

But the fact remains, there is no simple way of counting wolves across a massive geographic area. While caribou can be counted from the air, wolves are like ghosts on the landscape, said Taillon. They blend in, and unless they’re moving, they are near-impossible to spot.

They can be counted using furs from trappers, but those numbers fluctuate depending on the efforts of the trappers as much as the actual change in population of the wolves.

What is known is that the population of wolves is closely tied to the number of caribou available.

“The abundance of wolves in northern populations follows [the] abundances of migratory caribou populations, its main prey,” said Taillon.

“When that caribou is very abundant, that wolf population will be abundant.”

This relationship is known as the numerical response: more caribou equals more wolves. The opposite also proves true: a decrease in the caribou population will precede a decrease in wolves.

“When caribou become very rare, there will be no more wolves around,” she said.

Take, for example, the George River caribou that have seen a drastic decline since the 1990s and now sit at around 5,000 animals.

“In recent years, they haven’t observed almost any wolves in that area,” said Taillon.

However, after a caribou population declines, there is a bit of a delay before that’s also evident among the wolves.

“That kind of delay in that relationship we can see in the wolves on the Leaf River caribou range,” said Taillon. “All of that is corroborated by people living in Nunavik. On the land, they can notice that.”

The Leaf River herd is still quite abundant at 186,000 animals in the fall of 2019, so they can also support a healthy wolf population.

Since wolves decline after caribou, there is a period where they appear more abundant, in comparison to the already decreased numbers of the herd.

A cause for concern

While ebbs and flows are a part of the natural life cycle of caribou and wolves, that fluctuation becomes problematic when the hunter gets an assist.

“When that relationship is not natural is when a predator is favoured or increased by another factor,” says Taillon. “Let’s say in the southern part of Quebec, when you have a lot of forestry, it would open the habitat and allow access to their prey.”

While that isn’t currently the case for northern Quebec, Taillon said they are closely watching impacts of climate change and how they could shift that scale.

“The black bear is quite favoured by climate change,” she said. “If it’s milder in the North, it’s better for the black bear to get there and get more food.”

In 2013, an Ungava Caribou Aboriginal Roundtable was formed among Inuit of Nunavik and Nunatsiavut along with the Naskapi, Cree, Innu and Métis nations, to discuss the issue of loss of caribou and to develop a conservation plan for caribou in the region.

With numbers of caribou declining, in 2016, Nunavimmiut demanded the Province of Quebec close the caribou sport hunt for Leaf River caribou.

“We won’t to be able to harvest as much as we like if we want to see the herd recover. If the trend continues, we’ll have to impose quotas.”

The province did gradually reduce the sport hunt and closed it in 2018.

Noting that climate change could have still unknown impacts on the caribou population that shift its natural cycle, Delisle Alaku said other factors needed to be considered in the conservation of the herd.

Those factors include new parasites and predators and increased air traffic, as well as the growing population in the region.

Right now, Quebec’s ministry is working with the coordinating committee and Nunavimmiut on a management plan for the Leaf River caribou herd.

Taillon said it will address the threats and limiting factors on the herd and offer solutions for supporting it.