“Industrious, an entrepreneur and successful businessman, a gifted raconteur” 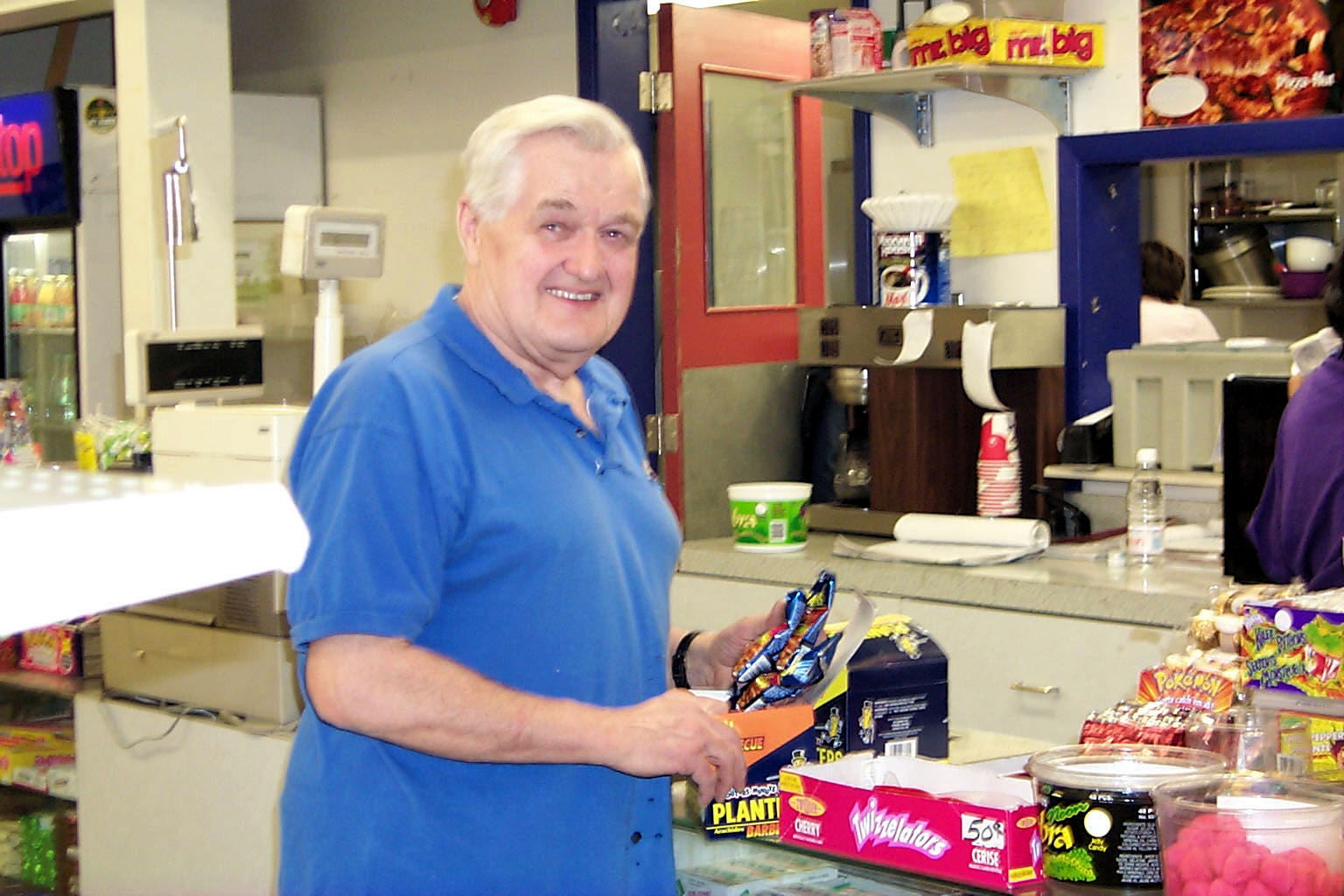 Gordon Rennie in the early 2000s, when he worked as manager of the North West Co.’s Quickstop store on Nipisa St. in Iqaluit. (File photo)

The year 2019 will be remembered for many things: the impeachment of a U.S. president, the re-election of the Trudeau Liberals, global warming and climate change, fake news and many more exciting, newsworthy and even more mundane happenings.

For many folks here in the eastern Arctic, 2019 was also the year we marked the passing of Gordon Macpherson Rennie at the ripe old age of 90 in July 2019.

Gordon was born on April 27, 1929, in St. John’s, Nfld., to an immigrant family of Scottish farmers. The Rennie family were brought over to Newfoundland to run the family estate and farm of the wealthy, mercantile Macpherson clan.

Dr. Cluny Macpherson, the scion of the Royal Store’s founder—who Gordon knew well—was the famed inventor of the first prototype gas mask used by the British army during the First World War. Gordon, many years later, would often speak of Dr. Cluny and his brother Harold Macpherson in very endearing terms.

Life on the Macpherson farm was difficult and the work was hard. Gordon decided that in 1947 he would either go to McGill University in Montreal or Memorial University in St. John’s.

He was leaning toward McGill, but soon after the Second World War, entrance or admissions of new students were weighted toward returning veterans.

Gordon decided not to wait to be accepted and answered a recruitment advertisement for the Hudson’s Bay Co. The ad suggested a career and a life of adventure in the Far North. 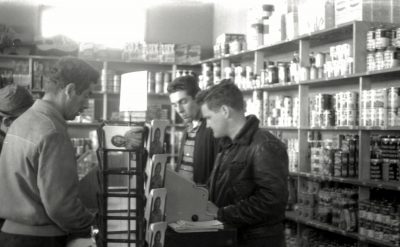 Gordon Rennie (right, wearing a leather bomber jacket) at the old Hudson’s Bay Co. store in Apex, in a photo taken some time in the late 1950s or early 1960s. (File photo)

His mom was lukewarm to the idea of his leaving to go up North, but his father thought it was a better strategy than working the farm in St. John’s. Gordon took the infamous train known as the “Newfie Bullet” across the island, then a ferry across the Gulf of St. Lawrence, then another train in Nova Scotia to Winnipeg.

The trip was pure agony for Gordon. Major dental surgery a couple of weeks before his scheduled departure resulted in new dentures, with top and bottom plates. The trip took five long days.

Arriving in Winnipeg, Gordon met up with the other raw HBC recruits who were going north. They received their job orientations and community posting assignments. Of the 35 new apprentices that started with Gordon, only a handful lasted beyond the first three years of their contracts.

After a couple of weeks in Winnipeg, Gordon again embarked by train, headed north. His first stop was 640 kilometres north of Winnipeg at the fur trapping and railway village of Wabowden. It was here that Gordon was first introduced to Indigenous culture and the world of retail sales.

Seven weeks later, Gordon received word to board the train again and head for Churchill. From Churchill, he was to wait for arrangements that would be made by the HBC for his next posting. After a few weeks of waiting in Churchill and working at the local HBC store, Gordon was getting itchy to leave.

An arrangement was made to take Gordon up the coast of what is now the Kivalliq region to his first Arctic posting at Tavani, by way of a locally owned 40-foot Peterhead boat. The owner and captain of the Peterhead was a local trader, the well-known Inuk Johnny Voisey. Johnny’s crew consisted of himself, Johnny Karetak, and his wife.

After a few adventures, hunting, and emergency rudder repairs, they arrived in Tavani two weeks later. Tavani was also known as Qurviujaq and was just an HBC trading post. There were no permanent residents in Tavani, just the HBC clerk and the HBC manager.

After 18 months, Gordon was transferred to the isolated northern Manitoba Chipewyan post of Duck Lake. After six months in Duck Lake, he returned to Churchill and then to Newfoundland for holidays, after his three-year initial contract term.

Gordon now had decisions to make. He had become a successful and well-known trader within the HBC family. He had learned to speak Inuktitut, and in Duck Lake he picked up enough of the Chipewyan language to do business in that language. He was recognized as a hardworking and reliable employee.

In the meantime, Newfoundland had recently joined Canada, and Confederation had brought employment and prosperity to the new province. His family wanted him to stay. But Gordon would later say he had been bitten by the northern bug and there was no turning back.

There would be other stops along the way. He would become store manager in Arviat, and he would serve as post manager at Attawapiskat in northern Ontario, as well as three and half wonderful years in Kimmirut as HBC manager, where he would meet his wife, Sarah Davidee.

In 1956, Gordon would travel by dog team to Iqaluit as the new store manager in Apex. He would later become a district manager with the HBC and they would live for a short while in Montreal. 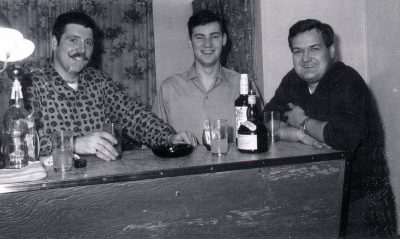 Gordon Rennie at a party in Iqaluit in the early 1960s. The man on the left with the moustache is the late Bill MacKenzie, who died in 2001. (File photo)

In Iqaluit, Gordon and Sarah would raise a family. They were the first couple married in the newly constructed igloo-shaped Anglican cathedral in 1970.

Gordon would become involved in the civic and business life of the community and the territory. He was the first mayor of the Village of Frobisher Bay in 1964. He was a charter member of the Iqaluit Rotary Club, founding member of the Community Futures and Baffin Business Development Centre, and he served as a member and chair of multiple boards, committees and territorial organizations.

He was an Honorary Toonik for Toonik Tyme in 1970 and was awarded the Queen’s Diamond Jubilee Medal in 2012 for his lifetime of service to the community. He worked for the HBC for over 50 years, before his retirement.

In 1995, Gordon and I served together as members of the Iqaluit for Capital Committee. The committee was formed to lobby and support Iqaluit as the new capital for Nunavut. In advance of the territorial-wide plebiscite on the location of capital, we were asked to visit the Kivalliq region and articulate the virtues of Iqaluit being our new Nunavut capital.

Jerry Ell and Leah Inutiq also made up the travelling committee. In advance of our arrival in Arviat, Jerry and Leah had gone on local radio to explain the purpose of our visit and who was with our group.

When we arrived in Arviat, the airport terminal was jam-packed with folks who came out to welcome and shake hands with Gordon Rennie. Many of the elders in Arviat had remembered him from his time there as the HBC manager, as well as the clerk, in Tavani, and were on hand to renew their acquaintanceship.

Gordon Rennie was industrious, an entrepreneur and successful businessman, and a gifted raconteur who could spin a tale with the best of them. He had a great memory for times, places, people and events.

He could be a hard taskmaster as your boss and could be vociferous in his criticism as well as praise—as he saw fit.

Over the years Gordon would be my boss, a fellow board and committee member, but, more importantly, a friend.

Gordon passed away surrounded by family and friends here in Iqaluit this summer. He will be missed.

A life lived with pain and love
An adventure that knew no bounds
Forever remembered in the frozen ground
To rise again and fly above.

Ed Picco served as MLA for Iqaluit in the legislative assembly of the Northwest Territories and as MLA for Iqaluit East in the legislative assembly of Nunavut, where he also served in the Nunavut cabinet as minister responsible for health, education and many other portfolios. He’s now co-founder and principal of the Niksiit Group management consulting firm and an adult educator at Nunavut Arctic College.