These two pieces of Inuit art sold for high prices at a Sept. 16 Waddington’s auction. On the left is The Enchanted Owl by Kinngait’s Kenojuak Ashevak from 1960, which sold for $204,000. On the right is a carving called The Migration, from a series by Joe Talirunili of Puvirnituq, which sold for $216,000. (Images courtesy of Waddington’s)

The COVID-19 pandemic does not appear to have harmed the market for fine Inuit art, judging by sales from last week’s Inuit art auction at Waddington’s in Toronto.

The auction of about 125 lots last Wednesday evening was “unusual,” said Duncan McLean, the auction house’s president of Inuit art. While such events are usually packed with attendees, for this one, the audience was at home, watching the auction as it streamed on YouTube.

But despite it being a virtual event, the auction racked up $1 million in sales, McLean said, which, as he put it, is “a big chunk of money for something [like Inuit art] that is so focused.”

McLean said the auction shows the power of the growing interest in Inuit art.

That because “Inuit art is now considered great Canadian art, as well as Inuit art,” he said. 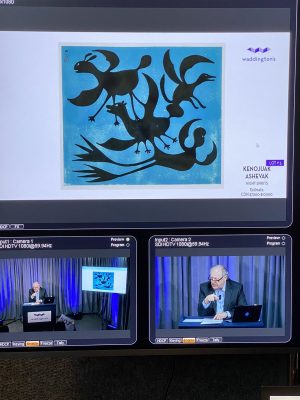 Waddington’s Duncan McLean went online on Sept. 16 to auction off about 125 lots of Inuit art, including many prints and carvings from well-known Inuit artists. (Photo courtesy of Waddington’s/Twitter)

That means a collector of Canadian art will include works by renowned Inuit artists, such as the acclaimed Kinngait artist Kenojuak Ashevak, who died in 2013 at 85, and other Kinngait printmakers.

“I don’t know in what other aspects of Canadian printmaking that you will get this kind of strong market. It’s quite rare and unique in Canada,” McLean said.

Last Wednesday evening a stone-cut print by Ashevak, The Enchanted Owl from 1960, which was the twelfth in the series of 50 prints made, sold to a collector for $204,000 in the auction.

When the print was first released 60 years ago, Ashevak’s The Enchanted Owl sold for $75.

Of the 50 prints that were made, half were red and black and half were green and black.

That image later appeared on a 1970 Canadian postage stamp commemorating the centennial of the former Northwest Territories.

The largest sale of the evening was of The Migration, a carving from a series by Joe Talirunili of Puvrinituq, sometimes called “Joe Boats.”

Talirunili’s series tells how when Talirunili was young, his family and several other families were heading to another camp.

The ice floe they were on broke off and began to drift into Hudson Bay, forcing the group to make an umiak out of the materials at hand.

Adrift and hungry, two weeks passed before they finally sighted the cliffs of the Ottawa Islands.

“However, the boat seemed unable to gain enough headway to make [it to] the shore, prompting Talirunili’s grandmother to suggest that a gun be fired at the land to subdue any rogue spirits that might be hindering their progress. The gun was fired, and the group made it ashore,” says information accompanying the carving in the auction house’s sale catalogue.

Strong interest was also shown at the auction in many carvings, including The Attacking Polar Bear by Pauta Saila from about 1975, which sold for $28,800.

You can look at the entire gallery of art sold at the auction and the sale prices here.