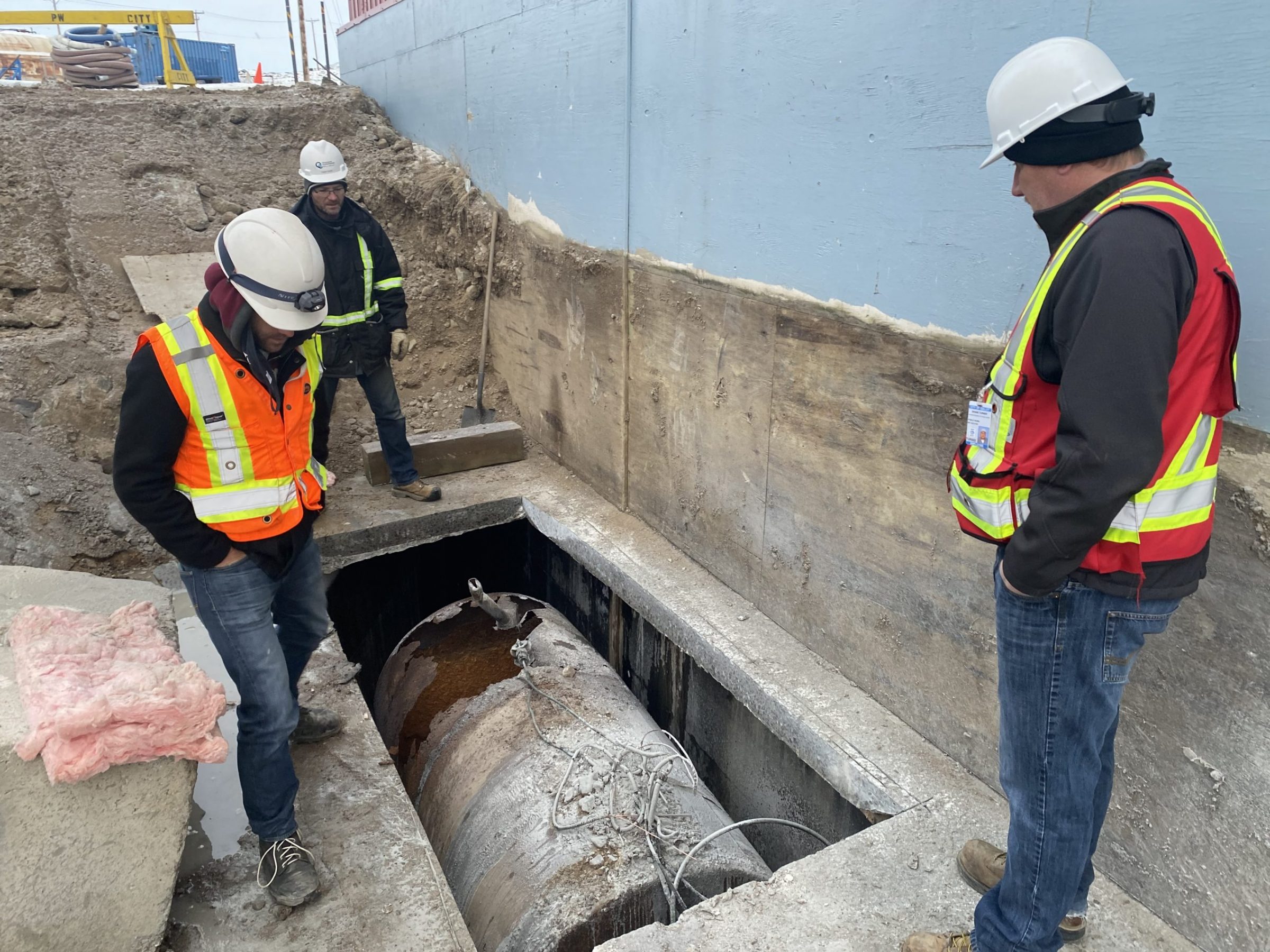 The City of Iqaluit believes this fuel tank is the source of a fuel contamination discovered last fall at the water treatment plant. A firm hired by the Government of Nunavut doesn’t believe there is enough data to support this theory, and recommends work to mitigate all possible sources of contamination. (Photo courtesy of the City of Iqaluit)

Iqaluit’s water emergency is over, but it’s still going to take months of work to safeguard the city’s water treatment plant from possible future contamination, according to a risk assessment prepared by a consultancy firm hired by the Government of Nunavut.

The six-page report, prepared by Wood, was obtained by Nunatsiaq News through Nunavut’s access to information law.

The City of Iqaluit started receiving reports about a smell in the water on Oct. 2. Ten days later, the city and Department of Health told people to stop drinking it, after a strong gas-like odour was discovered in a tank at the water treatment plant. Fuel levels in that tank later were found to be more than a million times higher than what Canada’s drinking water guidelines consider to be safe.

WSP concluded that the contamination came from a forgotten, decades-old fuel tank that was found in an underground area just outside the plant called “the void,” and the city has endorsed this conclusion.

But a risk assessment, prepared by Wood engineer Jack Hinds on Nov. 25, casts doubt on that explanation.

“Wood continues to believe that there is insufficient data gathered to date to verify that the single suspected source and transport mechanism resulted in the [water treatment plant] contamination,” reads the report.

That’s why Wood has recommended the city commit to another, more thorough, risk review, on top of more than 30 other tasks designed to protect Iqaluit’s entire water treatment system from contamination.

Most of the work was expected to be complete before the do-not-consume order was lifted, but several items fall under a March or September deadline.

The report does not discount the risk of tampering, and recommends security upgrades at the plant, including the replacement of a “missing door” on the west reservoir, repairs to a door on the east reservoir, and installation of a secure hatch on the exterior access to the treatment plant’s surge tank.

It also recommends “locking of all [treatment plant] doors, with controlled access to keys/fobs.”

Another portion of the report is focused on risks posed by Iqaluit’s diesel power plant, which is located near the water treatment plant.

The city is asked to request Qulliq Energy Corp. provide updated procedures for the handling of fuel, and confirmation that the power plant’s fuel and oil lines are double walled, have leak detection and are regularly inspected.

The report also asks for confirmation that QEC has a protocol in place to notify the water treatment plant immediately in case of a potential spill.

A portion of the report identifies the risk of “unknown pathways” of contamination, and seems to hint at some unfamiliarity over certain aspects of the water treatment plant itself.

Wood asks for comprehensive plans for the water treatment plant, including “as-built drawings,” identifying all available information from the 1962, 1999, and 2008 water plant plans, and updated information about all modifications to date. That includes plans for the recently installed bypass system, and a “verification of tank interconnections, valving, piping, drains, etc.”

By September, Wood wants the city to have identified all underground tanks at the water treatment plant and have completed a “permanent isolation of these tanks.”

Wood recommends follow-ups in March and September to make sure the longer-term tasks are complete.

The Department of Community and Government Services is working with the city to implement the recommendations in the risk assessment, with oversight from the territory’s chief public health officer, Dr. Michael Patterson, according to a statement from the department.

The City of Iqaluit has finished some work identified in the report, including the installation of two online hydrocarbon monitoring stations along the water treatment system.

Wood recommended these monitors be hooked up to alarms, which would trigger a system shutdown and callout to dispatch if they were to go off.

On Dec. 16, the alarm on the city’s treated water monitoring station sounded, and staff found elevated hydrocarbon levels in one of the treated water tanks.

The city issued a news release about the incident on Jan. 6, saying the problem was caused by maintenance at the plant.