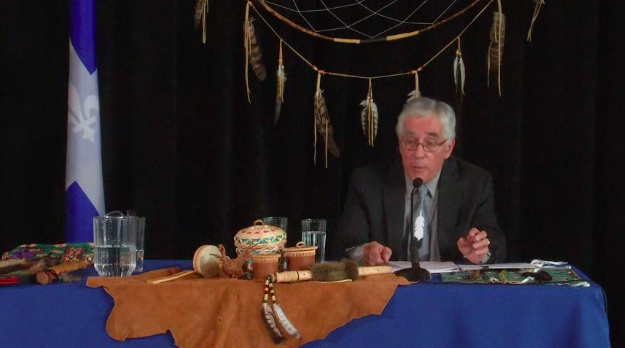 Retired Superior Court Justice Jacques Viens led the inquiry into the mistreatment of Indigenous people by several Quebec government departments. On Sept. 30, he released the findings and recommendations of the Viens Commission. (Screenshot)

The Quebec inquiry into the public service’s mistreatment of Indigenous people was released on Monday, Sept. 30.

“Many laws, policies, standards or institutional practices in place are sources of discrimination and inequity to the point of seriously compromising the quality of services offered First Nations and Inuit,” said Jacques Viens, the retired Superior Court Justice who led the inquiry, through translators at a news conference on the report’s release.

This situation, he said, leaves populations with problems for which there is no chance to act or remedy the situation.

The call for an inquiry stemmed from a Radio-Canada report on the way police in Val d’Or were mistreating Indigenous women.

The release of the Viens Commission report was marked, following the news conference, with a shared meal, in that same community where the inquiry was sparked.

“I’m very happy to be doing this here in Val d’Or where everything started,” said Viens. “Where women had the courage to speak out and bring to attention the problems with Quebec.”

The provincial Liberal government under then-premier Philippe Couillard broadened the mandate of the commission, to include the treatment of Indigenous people by police, the justice system, the correctional system, health and social services, and youth protection services.

This work began in 2016 and hearings wrapped up last December. The scope of the inquiry was restricted to look only at the past 15 years.

There were hearings in both Kuujjuaq and Kuujjuaraapik, as well as various cities and villages in Quebec. Through these, 765 witnesses came forward and an additional 423 witnesses submitted written evidence of their experiences.

The resulting 520-page report offers 142 recommendations for the government of Quebec to address what it calls undeniable systemic discrimination.

“A sure conclusion of the commission was that the structures and processes in place demonstrate an obvious lack of sensitivity to socio-geographical realities of Indigenous people,” Viens said.

At the November 2018 hearings in Kuujjuaq, Rhoda Ezekiel of Quaqtaq described the loss of her brother, Johnny Aloupa, who went missing and died 14 years before, after being sent to the hospital in Kuujjuaq for his epileptic seizures.

He was to be transferred to Inukjuak in mid-August for rehabilitation. Aloupa checked in for his flight but never made it there—he was only reported missing, and his family notified, three weeks later.

Before that, at the hearings in Kuujjuaraapik, Lucy Kumarluk of Umiujak explained that her family received no answers from Montreal police in 2002 when her brother’s body was found in the Lachine Canal.

Kumarluk said they believed he had been murdered. Staff of the commission were able to find the coroner’s report and provide Kumarluk with it, showing he had suffered from alcohol dependency and mental health issues and had accidentally drowned.

Lack of communication a recurring problem

Lack of communication was a recurring problem witnesses described throughout the inquiry, with questions left unanswered and information withheld.

While geographic factors and a lack of available services were certainly a challenge the commission noted, they also heard that First Nations and Inuit are presented with the additional problem of accessing services in their own language, or even the English language.

“This situation restrains the capacity of individuals to communicate their vision of things or situations and to better understand the information given to them whether it be directives or conditions imposed on them or the processes that come from this,” said Viens.

He added that we cannot continue to claim to support preserving Indigenous languages while at the same time neglecting to offer basic services in those languages.

One recommendation of the report calls for local governments to appoint liaisons to help communicate with Indigenous residents about available resources.

The report also makes several recommendations about the availability of Indigenous language translations and translators.

Nunavik health officials also spoke to the commission last November, saying only half of their staff are Inuit and the organization struggles with the high turnover rate of southern hires, yet Quebec legislation makes hiring more Inuit a challenge.

Among recommendations in this vein, the report calls for the removal of proficiency in the French language as a requirement for certain positions.

From the creation of reserves to forced Christianization and residential schools—the last of which closed in Quebec in 1991— Viens said these events have marred the relationship between Indigenous people and public services over the past 150 years.

The report makes various recommendations with the intention of  better educating people across Quebec from a young age on Indigenous peoples and the discrimination issues they face.

“This report is not a conclusion,” Viens said. “It is an invitation for all citizens of Quebec to become agents of change.”

Further selected calls for action from the report are the following: